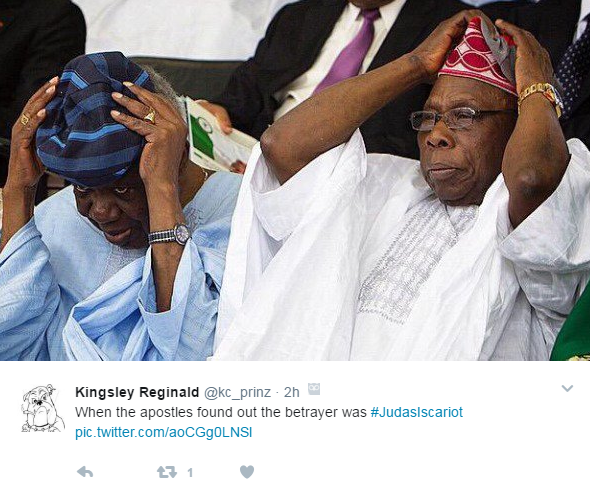 This year’s Good Friday is sure different from anyone we’ve had in the past considering all the events that is reshaping trends through social media, couple with Nigeria’s economic situation and EFCC’s recovery of funds through ‘whistle blower’.

It is posited that the ways of today’s whistle blower can be likened to the way Judas snitched on Jesus Christ by betraying him for a couple of coins.

IF – Judas Iscariot (remix)
?If I tell you say I love you o,
Bros J my oga for your mind o!
30 pieces of silver for the account oo?

#JUDAS ISCARIOT is the 1st Yahoo boy. He sold someone that knows he's going to be sold and the transaction was successful- @iamDrizx

#UReport 'When Judas Iscariot finally gets to hear how much whistleblowers are currently being paid'… in Nigeria in 2017 – @Rouvafe #EFCC pic.twitter.com/xTLLnxxYqn

When the Pharisees showed Judas Iscariot the money to betray Jesus pic.twitter.com/L1nfdFCSLy

Judas Iscariot, if he was a whistle blower in this generation pic.twitter.com/NvZeD2jxYl

This was Judas Iscariot about 2017 years ago on his way to betray Jesus pic.twitter.com/tgBCU34TA6

If Judas Iscariot was on Whatsapp he would have done this tonight : pic.twitter.com/gLyaQAPx8a

Rotimi Ameachi and Judas Iscariot are both trending on a good Friday……..coincidence?

We need Judas Iscariot to come and kiss Buhari biko

When Jesus found out how much Judas traded him for #JudasIscariot pic.twitter.com/TezrL8udCJ

We need Judas Iscariot to come and kiss Buhari biko

I swear that Judas Iscariot is better than most of our African politicians today….. Liars! Nigeria is the worst. #GainWithXtianDela

Judas Iscariot should be very rich by now pic.twitter.com/EE976XFMcK