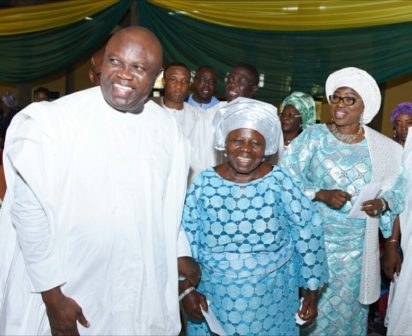 Lagos Governor, Mr. Akinwunmi Ambode’s mum turned 85 last week. And she celebrated it in good health, joy and happiness, in Lagos. Mrs. Christiana Akinwunmi Ambode, the mother of the Lagos Governor turned 85th on Thursday 24th of May, 2018. It was a classy event as all her 7 successful children made sure she enjoyed her day to the fullest. Venue was Haven events, centre off Oba Agbalajobi road  in Ikeja GRA. The venue was filled to the brim with a lot of A-list Nigerians from all walks of life. They all came to felicitate with the Lagos First Family.

The Ambodes whose watch word is always “prudency” made sure everything was done in moderation. Though, it was an exclusive low key event, it paraded those who matter to Mama in attendance. Mama Akin as she is fondly called was filled with smiles, as she walked into the hall with close family members. Seeing Mama, one could see the huge resemblance she has with all her children. She didn’t only look ageless, Mama’s singing prowess was brought to fore as she sang many soul lifting songs to praise God for a life well-spent.

Its no gain saying that Mama has lived a good life, as she not only has her teeth intact, Mama is still very much mentally alert. Her power of recall is superb. She still has all dates and time registered till date in her memory. She could give the date and time of the event and happening in her life without mincing words. She can pass for a 60 year old woman. This fact was also butressed by the event anchor, Mrs. Adewale Oluwashola”. She said Mama’s look hasn’t change from when she turned 80, (5 years ago) when Ebenezer Obey was on the bandstand to entertainer.

Many believed that it was her love for God, Grace and open mind that must have made her retain her ageless look at 85. What is the story of “Mama Akin”? What has made her look ageless? Who are her children? What is their Epe root? All these were revealed by Mama in a 2-part documentary aired at her birthday.

Mama Akin speaking on her life at 85 explained that she is the only child of her mother and the first child of her parent. Hear her: “ I am the only child of my Mother, Mrs Rachael Malomo and the first child of my father, Pa Emmanuel Oluleye. I was born in Epe on May 24th in 1933. I am from Epe just like Ambodes father. We were both from a place called “Oko-Epe” (a village in Epe town). His father was from “Ajagunlobe” in Epe.

I went to primary school at St. Micahel Epe in Popo. I am not from a rich home but my parent made sure I had education to the best of their ability. I later met my husband who is a Teacher. We got married and gave birth to 3 of our children in Epe at the Epe General Hospital. We were staying in a room beside Mr. Jide Bolujo.  We had Akinpelu Ambode, Akinwunmi Ambode, and Bose Ishola at Epe before we moved to Ebute-Metta. It was after then that my husband and I moved to Ebute-Metta.

He was still doing his job while I was sewing. He was a disciplinarian and an educationalist. I was using the shop opposite our house as my tailoring shop. We were not so rich, so my husband also augumented his salary by holding lesson classes after work. It was the balcony of our house that he always uses to teach his pulpils back then. I can liken the story of my life to Joseph in the Bible. I never knew I could be this big. I return all the glory to God on my Life and that of my children. It is not by my might neither is it by my power. God is merciful. Please permit me to sing a song of thanks. I love to sing a lot. (She began to sings song of praise raising her hands and dancing). I was a member of the choir too. We were attending St. Judes Church in Ebute Meta”.

Then I lost my husband exactly 37 years ago in 1981. That was the saddest day of my Life. It was very gloomy when he died and I always feel his absence since he was the one who brought me to Lagos. I also feel his absence every day seeing that we were 2 who came with the children but now, it is only me left. Then, I had to join making food to the business. I will cook rice and sell and people will come far and near to buy rice from me. My food was so popular and people will always buy from me. I use the proceeds from the rice to train my children and support the family”.

“I return all the praise to God. Now I have children who are Bankers, Doctors, Lawyers, and Accountants and to crown it all, a Governor of a state likes Lagos. I remembered when my son became the governor; I kept talking to my God and my husband. God, there are lots of people in Lagos and you made my son a Governor. “Emi Iya Akin ti di Iya Gomina “(I the Mother of Akin now turned Mother of Governor).

I kept telling my husband, how I wish you were here to witness this day. I also want to advice women on what they should do after the demise of their husband. When I lost my husband, my kids were so young. I told myself, I have 7 of them, do I want to remarry and share my love with another man? I said No. I decided to stay with my children. What happens when a woman marries another man after her husband death is that, the kids tend not to get the all the love they want. They also sometimes hate their mother for doing so. If you are not young and you lose your husband, stay with your kids. They will respect you and love you for that.”

“I thank God that he allowed me turn 85. I lost my parent 70 and 79 respectively and I thank God that he has brought me this far in life. I can`t help but thank God and my younger sister, Mr. and Mrs. Anibaba of University of Benin. They were the ones who assisted me with Governor Ambode back then.

They accommodated him in Warri at their apartment. Though I hardly see him more often like I use to in the past, but when I hear and see the accolades he gets for his good leadership role, I thank God for for his life. He is a good son to me and my family is a closely knit one. We are Christians who believe in high moral values. All my children are taught in the way of the Lord.   I also thank my younger ones namely. Mr. Michael Adekunle Oresanya and Modupe Oresanya” she explained.

It may amaze you that at 85, Mama still fasts 3 times a month. She attributed the success and turn around in her life to prayers and been steadfast. Mama is blessed with 7 successful children like Mr. Olusoji Ambode, Mr. Akinpelu Ambode, Gov Akinwunmi Ambode (Lagos state Governor), Mrs. Bose Ishola, Mrs. Femi Ambode, Mrs. Kehinde Onigbajo, Miss Taiwo Ambode and many grandchildren and great grand children.

They all surrounded her table at few minutes past 5pm when her 4-step silver and white cake was cut and coordinated by Nigeria High Commissioner to Britain Justice George Olusola Oguntade (rtd)..