Home News Why Gov. Fayose was not allowed to visit Buhari in London, presidency speaks
News 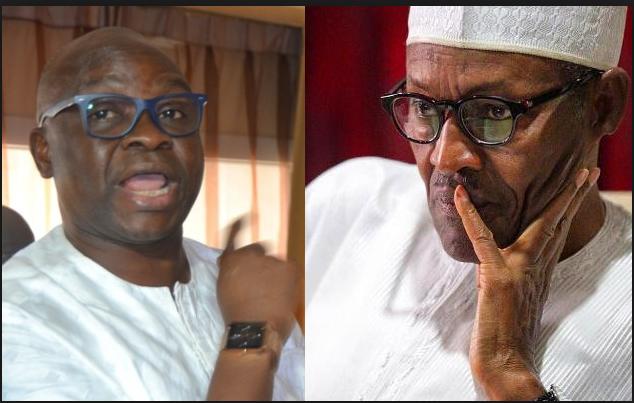 The presidency has finally explained why Governor Ayodele Fayose of Ekiti State was not included in the list of delegates sent to visit ailing President Muhammadu Buhari in London.

DAILY POST reports that seven governors led by the Chairman of Governors Forum and Zamfara State Governor, Abdulaziz Yari would be jetting out to London this night to visit Buhari who is nursing his health in the UK.

Explaining the reason’s for Fayose’s non-inclusion, the Special Adviser to the President on Media and Publicity, Femi Adesina said the presidency had no hand in the selection of the delegates to London.

“The selection was by the governors forum and you will see that the delegation is headed by governor Yari who is chairman of that forum. So that question should go to the forum”, he said

He explained that unlike the previous visit to the President made by only members of the ruling All Progressive Congress (APC) governors, this delegation was on a broader platform, the NGF, with membership also drawn from the opposition.

On why the president does not prefer the broadcast option while addressing Nigerians, he said, “It is a question of what he prefers and this is what he prefers for now. He would rather receive that delegation and that is what is happening. If the president opts for address option, he will do it.

“Instead of being curious, it should be the right time for the visit. When somebody has recovered or something has happened, it’s in our culture to visit such a person. So, this is the right time to visit the president because the news is that he is recovering and recovering well.”

Why Gov. Fayose was not allowed to visit Buhari in London, presidency speaks was last modified: July 26th, 2017 by Reporter