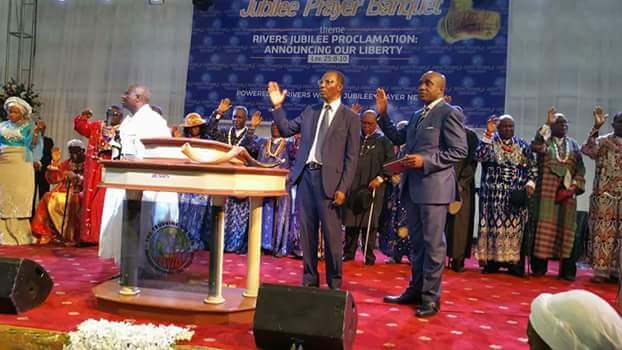 In a show of humility, the Governor of Rivers State, Nyesom Wike has been spotted kneeling down to be blessed and prayed for by a powerful man of God.

The Governor of Rivers state, Nyesom Wike has been spotted kneeling down as Nigerian pastor, David Ibiyeomie – who was accused of sleeping with popular Nollywood actress, prays for him at Rivers Golden Jubilee celebration tagged, Rivers at 50. Ibiyeomie had controversial journalist, Kemi Olunloyo locked up since March over a case of defamation of character. Gov. Wike Kneels Before Pastor David Ibiyeomie [Photos] was last modified: May 2nd, 2017 by Arinze Ago