Gov. WIKE Reveals How His Successor Will Emerge 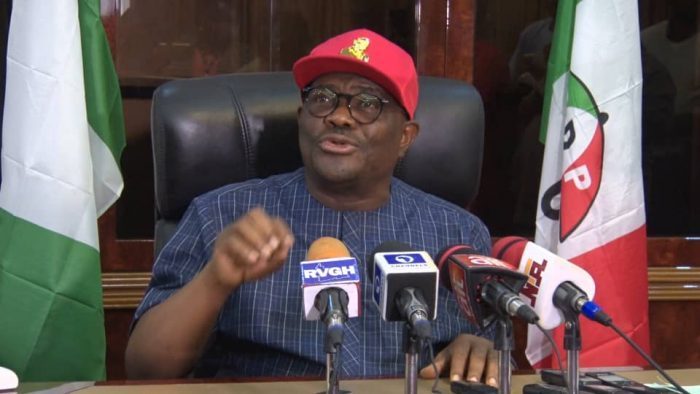 Barely less than 22 months to his leaving office on May 29th 2023, Rivers State Governor Nyesom Ezenwo Wike is disturbed about the emergence of his successor in office. And this has troubled him so much so that he embarked on a statewide campaign in the disguise of Flagging Off and Commissioning of projects from 17th of June to 8th of July 2021. At each Local Government Area that he visited first he targeted his would-be political opponents in the 2023 General elections and had something to say about such politicians that will reduce their influence in their localities. Such dress down includes castigating the politicians for not doing enough to provide projects to their people while they occupied juicy political positions as A-List Commissioners in the previous administrations and for those who are currently following him in his team while engaging the people of the state in a “Meet the People tour projects flag off and commissioning. At Etche Local Government Area, the governor challenged those who have been in the national Assembly from Etche/Omuma federal constituency MHR Ephraim Nwuzi asking the people to name what he has attracted to his people. Ephraim Nwuzi defected from Peoples Democratic Party to All Progressives Congress-APC. At Omerelu town Internal Road Project Flag Off, the Rivers State Governor queried how one of their sons was a grade Commissioner in the previous administration without attracting any meaningful project to his people and that their son became Governor without effecting positive change to his people. He said “If I don’t build in my father’s land where else do I build? I will do everything to fulfil my promise to you people. At this square when I came here in 2015, I promised to do this Omerelu Internal road project as this is a gateway to Imo state. As you fulfilled your own by voting for me. It will be completed in 9-months duration through an indigenous contracting Firm Monier Construction Company-MCC. Let the Commissioner for Works go and measure Internal Roads in Igwurita and Omagwa, we shall award the Internal roads.“

At Opobo/Nkoro Local Government Area where he went to Commission the Opobo/Andonni Unity Road project, Rivers State Governor Wike was quick to ask the people “Your son was Commissioner for Works, what did he bring to you? He was awarded a contract he never delivered and the sum of two Billion naira was not accounted for.” Surprisingly the people of Opobo were shocked with such revelations and knowing fully well how they love their son who once contested for Governorship election against Governor Wike in 2015 but lost.

When he went to Degema to Flag off the Trans-Kalabari Road connecting to Port Harcourt directly which has been awarded to Lubrik Construction Company LCC at the sum of N13 Billion, the Governor challenged the people to protect the workers and should anything happen to them he would be forced to stop the work. While Flagging Off the Rumuepirikom Flag-Over project which is sited at his community, the elated governor said that he has no other choice than to solve problems for his people and beautifying the city is one of the ways to attract investors to Rivers State.

At Okrika Local Government Area, Governor Wike reiterated how important Okrika people need to expand via reclamation of swamps instead of engaging in land grabbing, a statement the Okrika elders never take in with a pinch of salt as they went on radio challenging Ikwerre people not to tamper with their hard won Court cases instituted by them and those instituted by the Ogbunabali Diobu Ikwerre ethnic nationality community over who owns Port Harcourt that ended with Supreme Court judgments.

Based on the foregoing background many Rivers State politicians are now wagging their tongues over governor Wike’s stance on how his successor in office will emerge as he told some of them who have been visiting Bayelsa State where former Nigeria’s President Goodluck Jonathan and his wife a Rivers daughter Dame Patience Jonathan have retired to soliciting to be favoured for 2023 Rivers State PDP governorship ticket, this Wike sees as an affront to his presumed choice come 2023 which he is still holding close to his chest.

“I cannot support anybody who cannot move Rivers State forward. I will support those who mean well for this state and have the heart to continue the development of the state,” Wike reiterated.

The Rivers State Governor declared that no serious politician who is focused on winning any election can ignore the electoral strength of his political ward in Obio-Akpor Local Government Area of the State as he said in one of his public outings “you need me. I am a governor that comes from the most populated electable voters. There is nobody in this State that wants to be governor that will not look for my local government. Our local government cannot be underrated.

“Don’t hate me too much. Let people know that we must all work together to move Rivers State forward.”

The Special Assistant to Governor Wike on Media Mr. Kelvin Ebrin in a Press release stated thus “Governor Wike reasserted the status of the Speaker of the Rivers State House of Assembly and said anybody plotting to unseat him will be pitching a fight against the party and should be ready for the consequences.

The governor clarified that he never said all national or state lawmakers were working against him. He urged contributors to pages of the newspaper to show good understanding of spoken expressions when reporting.

Governor of Rivers State, Nyesom Ezenwo Wike has vowed to never betray the trust bestowed on him by Rivers’ electorate. He said the towering success records of his administration are manifestation of the fact that God has honoured the State and he will never compromise the interest of the state for any political advantage.

Governor Wike stated this during the flag off of the 5.33km Ogu-Ekporo-Kpogor-Wakama Link Road at Tende Ama, Ogu, in Ogu/Bolo Local Government Area on Friday. The Governor revealed that several people have approached him, but he has vowed never to compromise the interest of the people of Rivers State for personal political gains. He particularly acknowledged the doggedness of Ogu and Okrika women in resisting the military from rigging the 2019 election. According to him, God has also disappointed those who foisted several election reruns on the State.

Governor Wike said he will remain eternally grateful to the women of both communities who steadfastly risked their lives and thwarted compromised soldiers attempt to truncate the mandate of Rivers people.

“This is one of the local governments that was very strong for me. During the last 2019 election, it was historic, it is like the Aba women riot. It was here that the women’s revolution started against the military that wanted to rig us out in that election. Each time I remember, I say God thank you for using these women.” He urged Rivers people to walk shoulder high and never feel intimidated or play second fiddle in Nigeria. “So, I want all Rivers people to be firm and carry your shoulders high. We are not second-class citizens in this country.” Commenting on the road project, Governor Wike said those who thought it is impossible to construct such a road forget that God has given the power to man to conquer nature. Governor Wike promised to dredge 25 hectares of land for the Ogu people and reconstruct the Eteo-Ogu road for their support to his administration.

In one of his statements, the Rivers State Governor had told his audience that when it is time for the election, he and some elders of Rivers State chapter of People Democratic Party PDP will sit down to look out for a consensus candidate and where such approach fails the process will be open for direct Primary election for a Governorship candidate for Rivers State PDP in 2023 to emerge.

Gov. WIKE Reveals How His Successor Will Emerge was last modified: July 26th, 2021 by Emeka Amaefula