Governor Nyesom Wike of Rivers State has temporarily withdrawn approval licenses of some of the ‘best’ private schools in the state.

The school management were said to have failed to attend a meeting called for schools in Rivers State by the governor. See the list of schools affected. 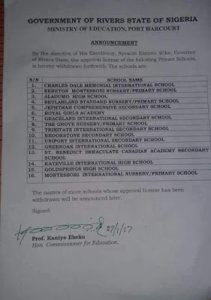 Apostle Johnson Suleman on his way to DSS office