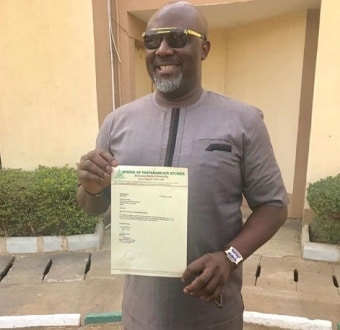 A group under the People’s Democratic Party (PDP), Kogi West Elders Forum (KWEF), has rejected any attempt to impose Senator Dino Melaye as the sole senatorial candidate of the Peoples Democratic Party, on the people of the Kogi West in 2019.
The group, made this known through its chairman, Hon. Shaibu Momoh, at a meeting held in Lokoja, over the weekend.
The group declared that its main objective was to work with other leaders in Kogi West, to present a credible candidate from Yagba axis, warning that imposition of candidate by any group or individual will be resisted vehemently.
“That the news of an attempt to impose the controversial Senator Dino Melaiye on the people’s Democratic Party (PDP) Kogi West, by the National Leadership of the party, as automatic Senatorial candidate for the 2019 National Assembly election is hereby Rejected in it totality and unacceptable,” he said.
According to the group,  Senator Dino Melaye comes from a Ijumu local government area of kogi West that has been producing the senator for the Senatorial district for the past 12 years and adding another four years will make 16 years while the rest 6 local government areas will still be waiting for their turn.
He stressed that of recent, the need for a shift to other local government areas became inevitable, universal option and it has become a serious campaign issue.
“PDP Leadership in kogi West endorsed by the state Leadership was the first Party to take a firm decision to shift/zone the position to other Federal constituency of the state for equity and justice, since over a year now.
“Known aspirants have emerge from other areas excluding Ijumu in PDP and they have being on the field carrying out their consultations and preparing their structures in preparation for the party Senatorial primaries expending huge amount of resources and time for the past 12 months.
“To now impose a strange candidate under a questionable reasons will not only be wrong, unjust and unfair but it will totally collapse all efforts by our highly respected leaders at rebuilding and rebranding the party in the state there by giving an opportunity and undue advantage to the opposition party APC that is in government to contend with,” he warned.
The Chairman noted that Senator Melaye, as he stands today, is not an asset to PDP, but a very big liability because he has no noticeable structure and followers that can substantially erode the consequential damage, such imposition could cause on PDP in the state.
“The result of his recall failure by Government backed agitators are not because of his political strength but rather it is the reflection of the wider rejection by the people of the sitting APC government, their policies, unpaid salaries, pensions and gratuities and ethnic coloration rather than the love for senator Melaiye, infact many people despite Dino’s rough behavior and they will not want him back.
“He is seen as too controversial and his unacceptable behaviors are the serious negative views of the public against him.
“He can not win any election in a free and fair atmosphere and PDP should therefore not gamble with him as a candidate for now.
“He needs a serious reformation period which PDP Kogi state do not have the luxury of time to dispense.
“The leadership of PDP in the state under the Apex Leadership of two former governors of the state, Alhaji Ibrahim Idris, Captain Idris Wada, senator Tunde Ogbeha Alhaji Musa Ahmadu and host of other critical stakeholders have been struggling to rebrand a PDP that can recapture power from an aggressive none performing government of APC in the state.
“They have reconciled several prominent strong men and women who came back to the party and their re-entrance back to PDP is without any condition or concession but genuine.”
Group kick against planned imposition of Melaye as sole PDP candidate was last modified: July 8th, 2018 by Reporter

US Based Actor,Boy Alinco, Talks About His...