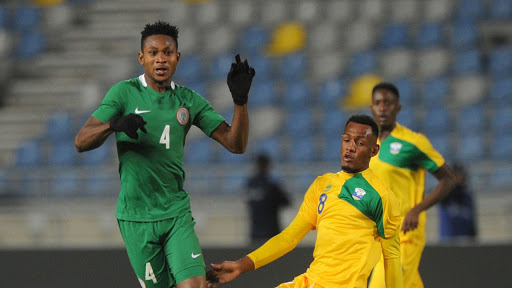 It was indeed a half time resurgence as the home-based Super Eagles on Tuesday thrashed Equatorial Guinea 3-1 after coming from behind in Agadir, the venue of the final group match of CHAN 2018.
The victory enabled Nigeria to advance into the quarter-finals of the 5th African Nations Championship (CHAN) holding in Morocco.
The Nigerian side dominated the game with many goal scoring chances being wasted as they had earlier done in each of their first two matches against Rwanda and Libya.
They had only Sunday Faleye’s 79th minute goal in the 1-0 win against Libya to point to before Tuesday’s match, and they soon looked like having to regret their wastefulness.
From a corner kick, Equatorial Guinea took the lead with five minutes to half time when Nsi Eyama’s powerful header flew past goalkeeper Ikechukwu Ezenwa into the net.
Faleye had a great opportunity to level up three minutes later as Anthony Okpotu chested down a pullout for him, but he fluffed it with only the goalkeeper to beat.

PSG SIGN LASSANA DIARRA ON 18-MONTH DEAL
But, after bungling two further opportunities to level up within seven minutes of the second half, Okpotu sneaked in to head home Osas Okoro’s in-swinger in the 59th minute.
Ten minutes later, substitute Rabiu Ali found Dayo Ojo whose shot from about 25 metres out gave Nigeria their second goal and the lead.
Ali then scored from the penalty kick spot seven minutes from time to put the game beyond their foes, after Okpotu was upended in the box.
The News Agency of Nigeria (NAN) reports that the result meant Nigeria finished as Group C winners, and will return to the Grand Stade in Tangier for the quarter-finals.
They will meet the runners-up from Group D on Sunday.
Already, the other quarter-final fixtures have hosts Morocco taking on Namibia in Casablanca on Saturday afternoon, while Zambia play Sudan in Marrakech on Saturday evening.