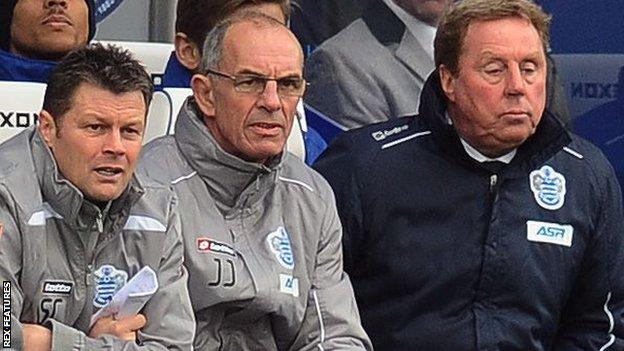 The Blues are 20th in the table, three points above the relegation zone with three games left, and travel to local rivals Aston Villa on Sunday.

“Birmingham are a proper football club but they are in a precarious position,” Redknapp, 70, told Talksport.

Redknapp’s appointment was announced just 16 hours after Zola’s departure, and he says he will initially take charge until the end of the season.

He took charge of Jordan for two World Cup qualifiers last year, and worked as an adviser to Derby County last season, but has not managed in England since leaving QPR in February 2015.

An FA Cup winner with Portsmouth in 2008, he led Tottenham to the Champions League quarter-finals during a four-year spell at White Hart Lane.

In 2016, he was made a director at Wimborne Town and a football consultant for Australian side Central Coast Mariners.

Redknapp, who will be assisted by former Bristol City boss Steve Cotterill, said: “I got a phone call last night at 7 pm from the people at Birmingham.

“My wife said to me ‘are you mad or what?’ but I get fed up sitting around doing nothing.”

Blues could be in the relegation zone by the time Redknapp takes charge of his first match.

Should Blackburn and Nottingham Forest both win on Saturday, Birmingham would slip into the bottom three.

After facing Villa, Blues host promotion-chasing Huddersfield Town before visiting Bristol City on the final day of the regular season.

“It’s a real challenge,” said Redknapp. “I’ll live up there until the end of the season, and if I keep them up I’ll sit down and talk about next season.

“It’s not really a risk. They have won two out 22. I haven’t got a magic wand. I’m not going to turn them into Real Madrid. We need a win.”

Chelsea Most Successful Captain, John Terry To Quit At The End Of The Season