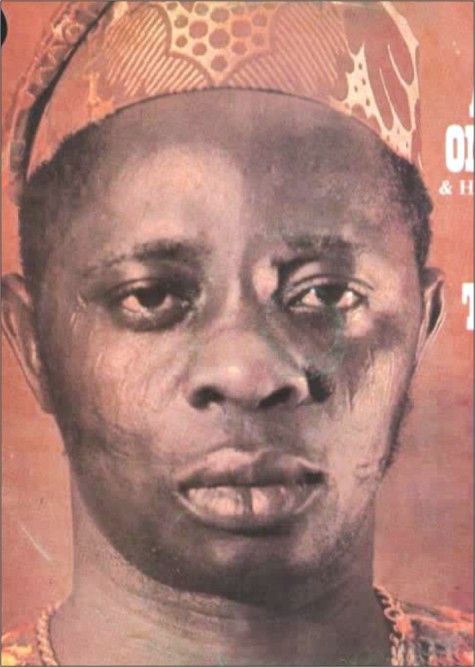 It was from Anti Wura, Buroda Alani’s third wife, that I first heard how Ayinla Omowura died. Buroda Alani was our extended family uncle. And he had a television set. He was one of the three people privileged to own a television set in the whole of Itakogun, Ile-Ife in the late 70s/early 80s.

Baba Deyeba – father of Chief Alex Duduyemi, the famous Aro of Ife; and Baba Lawal – father of my aburo, now a brilliant lawyer, Ibrahim Lawal, were the other two.

neighbourhood children. On this fateful day in 1980, Anti Wura refused to put on the prized, black and white television. The television in the wooden box with four legs! Our television!

Why? She told us she was mourning. Who died? Ayinla Omowura. Who was Ayinla Omowura? Was he a family member? Anti Wura looked at us incredulously. She began to sing Ayinla’s “Ise ‘le” – a song lambasting housewives.

How did he die?

How did he die? According to Anti Wura, Ayinla Omowura killed himself. How? Well, according to Anti Wura, Ayinla Omowura had a ring which he wore permanently on the thumb of his right hand. It was, however, not an ordinary ring. It was a magical ring. With the ring, Ayinla could sing in Hausa, Igbo, Fulfulde, French and English Languages effortlessly. Anti Wura did not include Chinese because I believe she hadn’t seen anyone from Beijing in Ife in those days.

That was not all. The magical ring could also make Ayinla disappear at will. Anyone slapped with the ring, according to Anti Wura, was bound to collapse and die. The ring, however, came with a warning. It has ewo – a neutralizer. It must not come in contact with human blood. The day it touched blood would be Ayinla’s last day.

So how did Ayinla kill himself?

According to Anti Wura, Ayinla was at a party where he was invited to play when a fight broke out. He saw that his band boys were involved in the fracas, and he decided to intervene. In the process of mediating, someone (Anti Wura didn’t mention his name) hit Ayinla with a metal chair! Blood! Instinctively, Ayinla felt his skull with his right palm. You can imagine the rest.

For years, I was haunted by Ayinla Omowura and his magic ring that must not come in contact with blood. So how did Ayinla Omowura really die? Was his death caused by a magic ring? Was he hit with a metal chair?

Waidi Ayinla was bold! Egunmogaji was brash! Omowura was brave! Anigilaje was uncouth. Alhaji Costly was an iconoclast. He was the stormy petrel of Yoruba music in the 70s. He took no prisoners. He admitted in Omi Titun Ti Ru that the only person he respected in music circle was Haruna Ishola (the doyen of Apala music).

Contrary to Anti Wura’s tale by moonlight, Ayinla Omowura was not killed at a party. So where did he die?

Baiyewunmi was Ayinla Omowura’s band manager for many years. He was Ayinla’s dependable Man Friday. He booked his shows, arranged his programmes and was also responsible for keeping the band’s money. In at least two albums, Ayinla sang his praises, even if fleetingly.

Then the bubbles burst. Ayinla accused Baiyewunmi of fraudulent accounting. Nuhu Ribadu must have been in elementary school at the time. There was no EFCC to report him to. Baiyewunmi was summarily summoned to Itoko in Abeokuta by the Emperor of Music. Perhaps scared of Ayinla’s fiery tongue (or afraid of the famed Magic Ring), Baiyewunmi, the embattled band manager refused to appear in court to show cause.

Egunmogaji declared him a wanted man. Everyone in Abeokuta began looking for the estranged Baiyewunmi.

Had he fled Egba to Lagos? Someone claimed to have seen him on his way to Cotonou. Another claimed he was in Ibadan arranging some boys to rival Ayinla as Apala

Musician. And there were reported sightings in Kano, Enugu and Kafanchan, but no one reported seeing him in Abeokuta.

Where was Baiyewunmi! Of course, Baiyewunmi was in Egba Alake. He was not even in hiding. In Yoruba land, name – whether given or adopted – is usually instructive.

Omowura was the golden child of Apala music.

Baiyewunmi loved good life. And good life loved him. And that proved to be fatal!

Ayinla Omowura had just finished composing another blockbuster album in his head. He had a legendary reputation for not writing his songs down. Before he became a professional musician, he was a motor boy and later a driver. He plied the Abeokuta-Lagos route. It was said that Ayinla would sing non-stop from Egba to Lagos on his trips.

He was humming his new songs whilst being driven in his King of Road, a brand new Mercedes Benz. It must have been the mental exercise, Ayinla’s throat began itching for something stronger than cold water. Alhaji Costly directed his driver to stop at a beer parlour for the much-needed refreshment.

Like the King he was, Ayinla stepped out of his car

majestically. He was followed by the driver and two of his band boys who were with him in the car. Egunmogaji!

People hailed the maestro. He waved at them. He was wearing his magic ring.

Apparently, Ayinla was not the only one who needed a drink. Seated comfortably in the bar and enjoying himself was no other person than Baiyewunmi himself! Baiyewunmi!

Police ke! Baiyewunmi stood up immediately. The bar became tense. Everybody in the bar knew everybody.

Baiyeunmi was not afraid. It could have been Dutch Courage. He took another sip at his beer. He placed the heavy mug back on the metal table. “Hadji Costly! Oro yi ko le to bayi.” He addressed his former boss with the endearing name he knew Ayinla loved.

Omowura was unmoved. “You are sleeping in Eleweran tonight! Ole!” Seeing that entreaties and pleas would be futile, Baiyewunmi weighed his options. He decided to bolt. Ayinla was blocking the entrance, but not totally. His medium frame was not enough to stop a determined band manager. He took on Egunmogaji headlong. Ayinla was not a former driver for nothing. He swiftly stepped aside.

He lunged at his attacker. He caught hold of his cloth. Baiyewunmi was caught like a spider. Anigilaje smiled triumphantly.

What happened next was as surreal as a scripted movie.

Baiyewunmi was locked in Ayinla’s tight grip. Though his hands were free, Ayinla held on to his cloth tightly. Police would soon be here! Ayinla beamed at his quarry. It must be the word ‘Police’ that Baiyewunmi heard. He staggered back to where he was drinking, dragging Ayinla with him.

His hand caught the handle of his beer jug. In a moment, he struck Ayinla on the head with the now empty but heavy mug.

Ayinla collapsed like a shot antelope. Baiyewunmi didn’t wait a moment longer. He fled. Omowura felt the wetness of his head. He raised his right hand to assess the damage.

His hand was soaked in blood. (Anti Wura’s account was accurate in this regard.) Ayinla began to chant incantation from one of his albums. Bi iku ba n pa won leworo leworo, ki e ma ka temi mo won (If death was killing them by the dozens, my death will not be included).

His two boys took him to the hospital. Ayinla must not die!

Music must not die! Doctors battled to save the life of the musical genius. People stood outside the hospital praying ceaselessly. Muslims, Christians and Traditional worshippers cried to the heavens.

Cock has crowed. Eagle has flown away. Ayinla Omowura is gone!

Baiyewunmi was arrested and charged with the murder of Mr. Waidi Ayinla contrary to section 254(2) of the Criminal Code. The trial judge was Mr. Justice Owolabi Kolawole of the Ogun State High Court (later OFR and later, Justice of Court of Appeal).

Medical evidence was presented. The cause of death, contrary to Anti Wura’s account, was not the magical ring.

To Anti Wura’s eternal disappointment, the ring – be it plastic, wooden or golden – did not even attract a mention in the trial. The cause of death was certified to be cerebral shock resulting from a fracture of the skull associated with a contortion of the brain as well as large intracranial haemorrhage consistent with the deceased having been struck on the head with a heavy object. Big Grammar! In a layman’s basic English, Ayinla’s head was cracked with a jug. Simple!

In his defence, Baiyewunmi denied striking Ayinla. He claimed that after Ayinla grabbed his cloth, Ayinla began to tremble all over and then collapsed. His counsel argued that the evidence of the prosecution witnesses contained such contradictions as to make it unreliable. Counsel also argued that if at all Ayinla was attacked, it was in self-defence. Case adjourned for judgment.

The whole of Nigeria waited with baited breath. Rumours began to circulate. Someone claimed that Ayinla had woken up miraculously! It was also claimed that Baiyewunmi had disappeared from prison, Anti Wura told us in far away Ile-Ife that Ayinla killed himself.

The courtroom was filled to the brim on the day My Lord Justice Kolawole was to deliver the judgment. The judgment took the whole of one hour. His Lordship held that Baiyewunmi had to be taken as having intended the natural and probable consequence of his act, which was that Ayinla would suffer grievous harm as a result of the blow to the head.

At this point, Justice Kolawole looked up from his record.

There was pin drop silence in the courtroom. Baiyewunmi stood in the dock with his head bowed. Counsel for prosecution and defence watched His Lordship intently.

The judge turned another page and continued: “In coming to my conclusion, I only need to say in the words of Apostle Paul in his letter to the Corinthians at chapter 11 verse 29:

Baiyewunmi was sentenced to death accordingly.

I haven’t seen Anti Wura since I left Itakogun in 1984.

When I see her I hope to ask her some questions about Ayinla and the magic ring.

How AYINLA OMOWURA Was Killed was last modified: January 6th, 2022 by City People

How I Play BIG In Comedy In ONDO State – Popular Comedian, ARKBISHOP