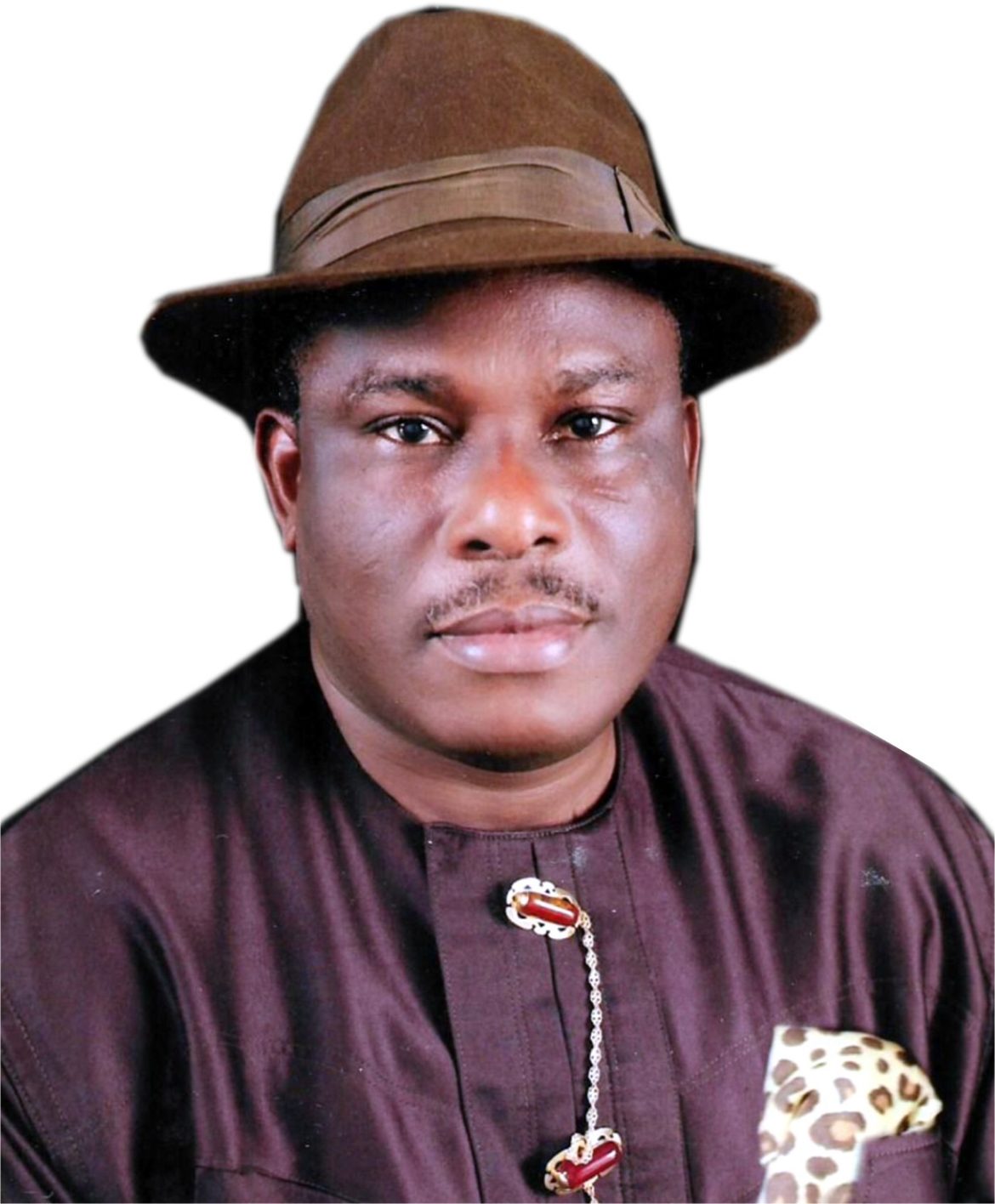 The political climate of Rivers state is always characterised by charged emotions as players decide what happens and how it happens. Senator Wilson Asinobi Ake was first elected a member of Federal House of Representatives representing Ogba/Egbema/Ndoni-Ahoada West Federal Constituency under the platform of Peoples Democratic Party- (PDP) He was elected to represent Rivers West Senatorial District in the Senate.

The Erema Rivers state-born politician later defected to All Progressives Congress (APC), while Chibuike Rotimi Amaechi was the governor of Rivers state in 2013 on the March to the 2015 General elections. However this astute man of integrity, stood for justice for the COMRADE Peter Odike and Senator Magnus Ngei Abe Rivers State APC, while the legal tussle over Direct and Indirect Primaries elections that were held got resolved at the Supreme Court affirming Comrade Peter Odike as the legitimate chairman state executive of the party where Senator Wilson Ake belongs.

He spoke with City People’s Port Harcourt Bureau Chief, EMEKA AMAEFULA (08111813069) on how he changed the face of the Niger Delta Struggle from Ijaw struggle to South-South Struggle and other sundry issues affecting Rivers State Politics. EXCERPTS

I am Senator Wilson Asinaobi Ake.I represented Rivers West senatorial district at the Senate in 2007 to 2015.

I am a member of All Progressives Congress-APC.

When you say that you belong to APC in Rivers state which of the factions do you belong?

The Court had ruled that Odike-led Exco is a legitimate one and the one recognised by the law, so there is no question about which of them I belong to since he is recognised by law it means that every APC member in Rivers state is under that leadership and I accept it.

Your party, APC, in Rivers state had infractions in 2018, can you tell us what led to that infraction?

It is not a long story as to what happened in Rivers state APC. It is all about the Ward Congresses, which most of our members paid to participate and unfortunately they were not issued forms to fill to congresses. Those denied the forms were excluded from  the congress. To seek  redress, after exhausting the internal mechanism  for redress they decided to  go to court and that was what led them from  one point  to the other until today. That was the beginning of the problem of APC in Rivers state. ..The denial of some members who actually paid to participate.

For Senator Magnus Abe, what has been his position?

Magnus Abe’s case came during the primaries as he chose to participate in the Direct Primaries, which were conducted by the authentic chairman of APC led by Peter Odike considering that the party had legal encumbrances against the use of delegates that emerged from OJUKAYE-led excos. The list of people who participated in the indirect primaries couldn’t be submitted and he decided to find out why and the only way he had to do that was to go to court to prove that he participated in the most recognised and legitimate process leading to the emergence of the candidates of APC    and the only way to test whether he was right or wrong was to go to the court of law.  And that was what led him to go to the court to find out if what he did was legitimate or not. So far the first Court had ruled that if not that the National Working Committee did not support his claim of Direct Primaries he would have been declared the candidate of the party and we felt in his own wisdom the Judge had done his best and we seek for improvement of that and that going by everything that Magnus and others did under Peter Odike that they are supposed to have been given the tickets of APC in Rivers state.

I have been participating in political activities and democratic governance for quite a while and I know that for electoral system there are processes and procedures and those processes and procedures, if they are followed, things are made easier. So, for me I like to follow where things are straight, where things are in order so that it creates less tension and it creates less cost and problems.  And when it was time to decide who to support after I did critical thinking that Rivers state has 3 senatorialdistricts and my senatorial district had  produced Governor from Rivers West and Rivers East  Senatorial District  has also produced governor and I think this time it  is the turn  of Rivers South East  Senatorial District. And having worked with Magnus Abe and having shown interest at the beginning I felt that he is qualified too, and be given a chance if not winning but to be given a chance to participate. I must put myself in the position of others if what is being done to Magnus Abe is being done to me how will I feel? I believe it is unjust and it is unfair to deny somebody opportunity of participation. That exclusion didn’t  go down well with some  of  us as it is unfair. In a democracy there  should be freedom of actions, freedom to express your interest , freedom to aspire to whatever position you wish. So, we felt that it was not right and we try to speak for people to reason. You can endorse whoever you want. If the people feel that you’re endorsing this person all of them will join you to vote that person, well and good. But allow everybody to participate. And outside that, Magnus fought while it mattered most when it was easy to have sold out. It could have been easy to distance oneself from him (Amaechi) as some of us would have still been in the senate today if I had stayed back with PDP, but because of him we decided otherwise we believed that it was wrong what was being done to Rotimi Amaechi by the then President. What Gooddluck  Jonathan did to Rotimi Amaechi was wrong. So, we felt that we could deny ourselves some comfort to support that cause of fight against injustice. So, I fought when it mattered in the case of Amaechi, then when it mattered for another person, I won’t change-position. No. My position has remained consistent that ‘what is bad is bad’ no matter the discomfort I am to suffer. So, that is why I decided to be with Magnus.

Can you tell us some of the things you did for your people when you were at the National Assembly?

Well, the most important things that I should talk about are the ones that made an  impact on many lives. First when I was elected to the Federal House of Representatives in 1999 I realised that as at that time there was a struggle called the Ijaw struggle in 1999 and I studied the whole thing and I realized that nobody would have been listening to the Ijaw struggle if not for the Oil. And my people the Ogba people, we have never been part of that struggle and yet we are the largest Oil producing Local Government Area in the country. So, I felt how could we cue into the struggle? So, when I became a member of the Federal House of Representatives, I  found that there was “Oil Producing Constituencies of House of Reps”.  And I worked with the likes of Emmanuel Agharivwodo, who later became Managing Director in Delta Development Commission –NDDC and Hon. Efigesi from Bayelsa state and Udo  Essien, who later became a Minister from   Akwa Ibom.  We formed that body, which later  metamorphosed into South-South Caucus in the House of Reps.

It was that pressure group that we used to push the case for the 13 percent, which then President Olusegun, Obasanjo refused to implement.  We used that body to launch South-South as we called all the governors  to join us  in the  struggle. We operated as if we don’t have any language barrier again in the  South-South.  So, that fraternity you see today was built from that source.  And I still pride myself for having changed the course of that struggle from just Ijaw Struggle to South South Struggle because I learnt that it was the oil that makes the powers that be to listen to us. That is one major thing that I originated. Then Chibudom Nwuche was Deputy Speaker Federal House of Representatives Abuja and he aided us strongly while we were forming the body.  Second,  the NDDC headquarter  today in Port  Harcourt, I can tell you, without me, without  my  input it wouldn’t have  been in Port Harcourt,  it would have been in Yenagoa. I say it authoritatively and those who were part of it know those who contributed and Honourable Chibudom Nwuche, then Deputy Speaker assisted me in so many ways in the realisation of the objective. I participated in the creation of the NDDC Act in 2000 from the beginning to the end including the 12-man Committee that decided on the Headquarter of NDDC. These are major achievements that I believe made an impact on the lives of so many persons, not just in my own constituency.

Most people don’t know all the things I have done. To me, the job was so enormous and I felt that anything that I do, I shouldn’t go to the rooftop and beat my chest because what was left undone is so enormous.

I believe that most of the places to put some of the projects will be at Federal College of FCT Omoku as I decided to help them with so many projects. As I gave them close to 9 projects, which were built and some other issues such as employment.  For me, I don’t  take count of people whom I have assisted  as it doesn’t count for me but for God.

READ ALSO: WHY I DECIDED TO DROP OUT OF SCHOOL IN FORM 3 – MOVIE ICON, YINKA QUADRI REVEALS

Why I Decided To Drop Out Of School In Form 3 – Movie Icon, YINKA QUADRI Reveals