How I Combine My Small Chops Business With Politics – KING Of Small Chops, SAHEETO 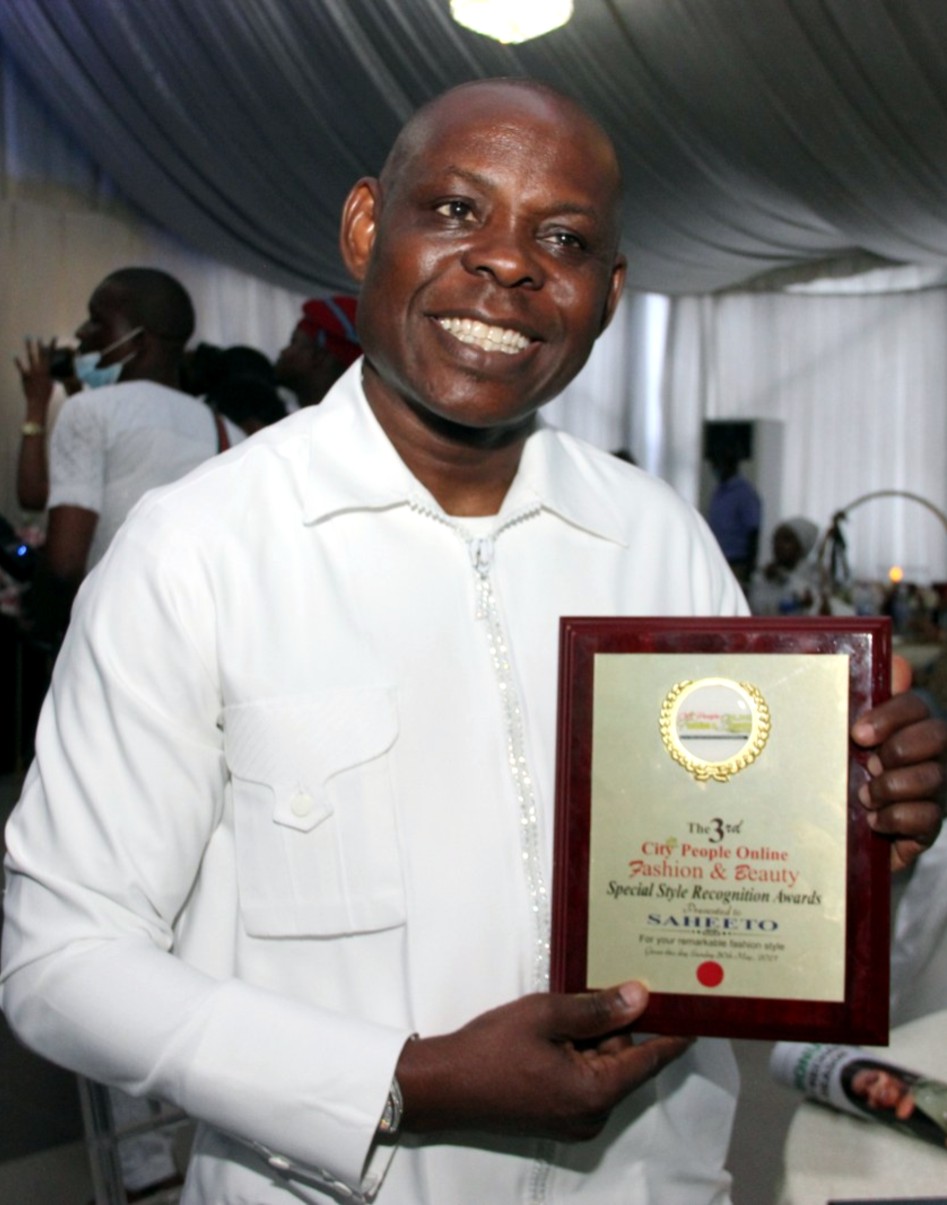 Mention the name Saheeto anywhere within Lagos business circle and you will be surprised at the several nods of recognition you will get from those around you. This is because Saheed Kekere Ekun, better known as Saheeto, the king of small chops, has become a household name within and outside the shores of Nigeria. He is the man who single handedly created and redefined the small chops business and made a phenomenon success of it. To say he has done very well for himself would be putting it mildly, as the very open-minded and honest Saheeto would be the first to tell you it wasn’t an easy walk to his success story. It took him every bit of his sweat and toil to get to where he is today. Many don’t know he once worked as a waiter in restaurants and hotels before he could come up with Saheeto small chops and transformed it to the global brand that it has become today. Yet, this creative man is not resting on his oars. There’s still a whole lot he’s striving to achieve, and he says he hasn’t even started yet. His grass to grace story is one that has inspired many to believe they can also make headway in their choice of business, no matter how bleak and daunting things may look at the start.

Apart from his small chops business, Saheeto is also into hospitality and Real estate business and he has also extended his Midas touch to both businesses, making remarkable successes out of them. Lest we forget, this clean and handsome business man is also a politician of note and he’s presently a member of the ruling party, APC, waiting to take his second shot at the federal house of reps, hoping to represent Lagos Island constituency II. He was at the 3rd City People Online Fashion and Beauty Awards where he was also recognized as one Naija’s most stylish business men. He spoke to City People’s Senior Editor, WALE LAWAL (08037209290) about how he has his business running for 30 years and his plans to keep his political career going despite a few setbacks.

It’s so good to see you again, sir…

Yes, thank you so very much, it’s been like two years or so now. And I’m so proud of you guys, so proud of City People.

Thank you, sir, and we are so very proud of you too. Like I said to you the last time, you have been an inspiration to young people, your success story tells us clearly, that you can become whatever you choose to become if you believe in yourself. You have done so well and we are proud of you.

Thank you very much, I really appreciate this.

Let’s take it from where we left off the last time. You talked about how far you had taken the business and also talked about your political aspiration. Before we talk about business, tell us how far you have gone with politics, which party are you presently, your aspirations, etc.

Okay, yes, we thank God. Everybody knows that I ran for House of Reps under PDP in 2008 and in 2015, December, I joined our great party APC and in 2018, I contested for the primaries and we thank God the way things went. You know, for everything that happens to you, there is a reason, a purpose for it. But I thank God for the exposure and experience, they cannot be underestimated. And as for my aspirations, I still believe that one day, the Lord Almighty will make my House of Reps aspiration come true.

So, you’re now a member of the APC, which constituency do you belong and hope to represent at some point?

The primaries were held yesterday, what’s your assessment of the process in your own local government?

Yes, in my own local government, we had a consensus candidate which I think was awesome. The leaders all came together and unanimously agreed on one candidate and that was it. It was a seamless electoral process. No violence, no disagreement. Largely, it was successful and peaceful in most parts but you know you can’t get it right all the time, so there were a few problems here and there but they will be sorted out.

Is it the incumbent chairman that picked the ticket in your local government?

No, it was the SLG of my local government that was given the ticket. For those other local governments that had hiccups, I’m sure the leaders will sit down and work things out according to the rules of the party.

So, in another couple of years we should see you giving politics a shot again?

Yes, why not? You know, when you’re in politics, its never say never. You keep going for it. Our current president tried so many times, Abraham Lincoln tried so many times before they got it. You have gotto keep trying. You’re not a loser when you don’t stop. You’re only a loser when you stop. If you lose one or two times, you don’t give up. Pick yourself up again and go for it.

Many will be wondering, why will Saheeto, an accomplished businessman who has been blessed and is comfortable, venture into politics? What is trying to achieve? What is he looking for? How will you respond to such questions?

Like I always tell people, if you and I fail to go into politics, then we will be leaving the hoodlums, the touts, to determine our fate, that’s number one. So, for you to be heard, you have to be part of them. You have to find a way to come to the table, join hands with the others and see how we can take Nigeria to the next level. The change you want starts from you. If you say you don’t want to be part of politics then you will allow people without history, without decent background to determine your fate and that of your children’s children. Number two, as a business man and philanthropist, yes, Saheeto is still growing and I thank God, but let me tell you something, if as a private business man I can only assist, let’s say ten people, getting into government, along with the efforts of others, we will be able to impact on the lives of many more people. I want to see Nigeria become as great as the United Kingdom. I want to see Nigeria as great as the United States. But there is a process to all of these things. And it’s because everyone is saying I don’t want to go into politics, I don’t want to waste my resources, I don’t want to waste my time, my energy on politics, that’s why things have gotten this bad in his country. But when you and I get up and say we want to be a part of the process, that’s the only time things will get better.

What are your thoughts on Asiwaju running for president?

Well, to start with, as a Nigerian, he has the right to aspire to be the president of Nigeria according to the rules set by the constitution. He is my leader. He is a great man and there is nothing stopping him. In all areas, he has touched lives. Tell me which area of Nigeria our leader has not touched? Is it in the east, north west, where? He has touched lives everywhere. He is the Nigerian that has the largest amount of followers. He has made people, he has built institutions, he has built structures. Do you know the kind of institutions this man has? Is it the ministers, the governors, the senators, the house of assembly members across the country, the vice president, is it the local government chairmen, name it. See, he’s not building himself, he’s building institutions. When you build institutions, all those institutions will support you. They will be there for you forever. He’s a great man and he’s going to continue to be a great man. So, if he comes out tomorrow and says he wants to run, why not? He’s the best man for the job. I pray and I believe it will come to pass.

Lets talk about business. How did Saheeto survive the pandemic last year?

Yeah, 2020 is a great year. It’s a year many will remember for a long time to come. Some people say they will delete 2020 from their lives, by we cannot. It has become a part of our lives whether we like it or not. Some people made money, some people lost money. Some people lost their lives. But we thank God we were able to weather the turbulent storm. We thank God almighty that we are alive today to witness 2021. The mighty have fallen but He kept us alive, we thank you Lord. The Alpha and Omega kept us alive and He’s keeping us alive. Last year was tough. It affected business greatly. We lost so much money, millions of naira, yet we had to keep on paying the salaries of workers that were not actually working. But you know, there’s no amount of money that you lose that will equate one life. Whatever we have lost, we are still thankful we are alive because that’s the most important thing. God almighty has promised us that he will restore all the days the cankerworm has eaten from us a million folds.

Now that the lockdown and restrictions are being gradually eased, how is Saheeto getting into the groove of things as well?

We thank God. Things are gradually getting better. His Excellency the governor started from a gathering of 50 and now the figure has increased, churches and mosques have opened, there’s interaction and even at that, we still have to eat during gatherings like this. So, we have to redefine and remodernise things. For instance, before the Covid, we were serving our small chops in small plates but now, your small chops and everything is packaged together, which we’ve been doing even before Covid. That’s what everyone is doing now. I believe that, hopefully, before the end of the year, things will be back to normal.

You told me Saheeto has been around for 30 years, tell me, what has been your staying power all these years because it’s so difficult to survive three years in business in this clime?

Yes, it’s difficult, I must tell you. But we thank God. We faced the 90s, we faced the 20s and now 2021, it’s not easy but we give glory to God. We had to consistently offer great quality all through the 30 years, we have been consistent and we have shown dedication. Yes, there have been others, but I believe there is room for everyone and at the end of the day, we will separate the wheat from the chaff. But I want everyone to watch out for Saheeto, we are rebranding in a big way. Just keep your fingers crossed, we’re coming out with something new.

How I Combine My Small Chops Business With Politics – KING Of Small Chops, SAHEETO was last modified: June 8th, 2021 by Wale Lawal

Revealed! 25 OYO APC Chieftains Who Will Determine Who Becomes OYO Governor In 2023

ACE Mall Springs Up All Over IBADAN, Opens Branches Across South-West Cities