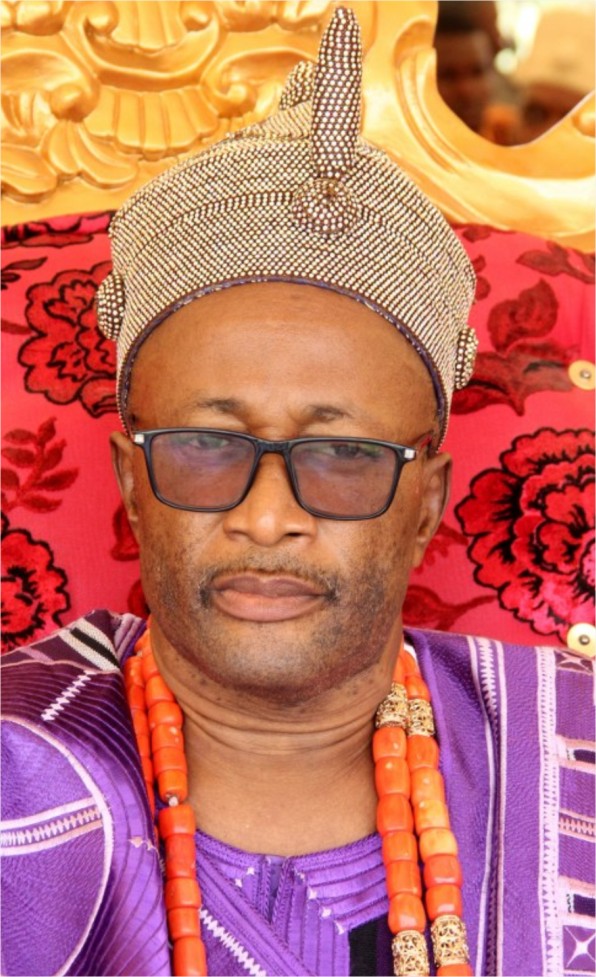 Oba Adebanji Ajibade Alabe is a first class Oba in Ekiti State. He was a former diplomat but beyond that, he is a visionary leader who has completely transformed the face of traditional leadership in Ekiti State and Nigeria as a whole. He clocked 10th on the throne of his ancestors and held a big celebration in Ilawe-Ekiti.

Governor Kayode Fayemi led other dignitaries at the event. The Ooni of Ife, HRM Oba Enitan Adeyeye Ogunwusi led over 20 royal fathers who came to celebrate one of their own.

On Sunday, April 24, 2022, Oba Adebanji hosted City People’s Brands Editor, DAMILARE SALAMI (08155134152) and Senior Photojournalist, Abdulrasheed Sanni at his palace office in Ilawe-Ekiti. It was an explosive session as he revealed a lot about his ascension to the throne and how Ilawe-Ekiti has been completely transformed just within 10 years among several other interesting topics. Below are excerpts from the interview, enjoy.

Kabiyesi, it’s been 10 blissful years on the throne. I spoke to a few people in the community and they all had spoken excellently well about you. How do you feel about making a decade on the throne?

I thank God Almighty that I have clocked 10 years on the throne; it is not by power nor by might but by the grace of God. It was just like yesterday that I was enthroned and before one knows what was happening, 10 years have passed. It has to be God, it has been 10 years of monumental successes, we’ve recorded achievements and we’ve lifted the community to a higher level. In the first instance when we were doing the contest to who to take over the throne and I had the privilege of coming from South Africa where I was serving as a diplomat then; when I saw the palace, it was an eyesore. And as at then, I already had a revelation that I was going to be the next king and I said to myself, is this where I was going to spend the rest of my life like a king? It was, to say the least very shocking. The spirit just told me that I have the opportunity to do the needful and that when you occupy a position; you either lift it up to your standard or bring it down to your standard. So the first thing we did was to renovate the palace. You can see now that everywhere is looking good; the time has recorded a series of achievements. We have a new model secondary school that is already in place, the state hospital has been renovated and now functioning very well too, the federal government has assisted us in the area of healthcare, the St Theresa hospital has been massively renovated and the project will soon be completed too. They have even brought in materials so that the health needs of the people are being met. Our roads are being revamped, thanks to God Almighty and Gov Kayode Fayemi who is actually dedicated and committed to us in Ekiti State and especially in Ilawe. By and large, we could point to a couple of achievements in the last decade. Yesterday you were at the Adedoyin Event Center, it’s a massive one, and I was able to prevail on one of our indigenes to put it up. Look at this office we are using today, it was built by one of my sons, the family of Pa S.A Adetayo and it has served us tremendously. I owe a lot to the sons and daughters of Ilawe, they have been very supportive, I am very proud of them and it is my prayer that God will continue to bless them more and more.

Kabiyesi, being a diplomat must have influenced your style of leadership as an Oba. Can you tell us a little about it?

Well, it’s still colouring my pattern of reign. In the olden days, you won’t see an Oba in a cozy office like this with a laptop and printer. I stay on it, I do my typing and printing, and I sign and record the details myself. I recalled that there was a time we were holding a meeting with the council of traditional rulers on Sunday and we were to send an urgent message to the governor. The meeting was holding at the other place so I ran to my office to prepare the letter, printed it, and gave it to those that would sign. They were all shocked that my secretary came to the office on a Sunday but I told them that I did it myself. So, most of the training that I’ve internalised during my service as a diplomat have come to the fore in the administration of the palace and the community. I believe in delegated responsibility, I delegate a lot of duties to a lot of my chiefs and I follow up to ensure that what has been delegated is properly actualised. I believe in peaceful cohabitation, no matter the provocation, it doesn’t last in me. Somebody hurts me, I chastise the person and move on. I don’t have the capacity to bear grudges. In the real traditional settings, you see people bearing grudges against themselves, they are holding a lot of things against themselves and unfortunately, I’m not called for that. That has helped me in the day to day administration of the community.

You have made history by becoming the first Alawe of Ilawe to chair the traditional council of Obas in Ekiti State. How were you able to get to that height within 10 years?

Well, if you go into the checked history of Ilawe, we’ve suffered a lot. My predecessors suffered a lot. Oba Afinbiokin Ademilekan resisted colonial imperialists and some local supporters who attempted subjugating Ilawe. Because of his resistance, he was exiled in 1925 to Abeokuta, he died there and his corpse was repatriated in 1929. He was buried and his successor suffered a lot of degradation, humiliation and embarrassment because they wanted him to be subjected to another Oba in Ekiti and Ilawe said no, the Oba said no; I’m an autonomous Oba, I brought my crown from Ile-Ife and I will continue to maintain that status despite the pressure from the white colonialists and supported by their local imperialists; he didn’t budge. So, I continued in that struggle when I ascended the throne. I saw the history, Alawe is a Pelupelu Oba, we joined the Pelupelu group of Obas in 1946/47. We were admitted, colonial documents are there; once you are in a class and a group of people, you are entitled to the rights and privileges of that position. When I ascended the throne, and I knew that the position befitting the Alawe was being denied and shortchanged, I resisted that vehemently and I started by being the Chairman, Ekiti South-West Traditional Council and shortly after that, I graduated when there was an opportunity for the state chairman of the traditional council, the governor went through the list of the eligible monarchs according to government records and the south was next. Out of the monarchs there, I found favour with the governor who chose me. And my 2-year tenure witnessed a huge turnaround of the council, I was able to turn around the council, brought a lot to bear in the day to day administration of the council, I was involved in a lot of travelling all over Nigeria to assist the government in the area of security. We held a series of meetings in Kano, Kaduna, Port Harcourt, and Abuja; we had cause to meet the president on behalf of Obas in the South-West where I spoke and I made my point well elucidated on it so eloquently that the president was fascinated and some of these suggestions were put into use. So, I’ve lifted the standard of the chairman of the traditional council, I’ve put an end to the idea of moribund leadership in the traditional institution, and I’ve made it responsive to modernity. You can’t continue to live in the Stone Age, the world is very dynamic but unfortunately, there will always be some people that will always want to resist change. But, change is a very necessary tool for development in any community or society that you can’t but have. I thank God that we have been able to surmount that challenge and my prayer is that God will continue to make me and my community triumph over all detractors.

This is my first time in Ilawe-Ekiti and I’ve spent three nights here but I can say that Ilawe-Ekiti is very peaceful. I have observed that the youths here are not as unruly as we have them in other places. At events, we see youths struggling with guests trying to extort them or beg for money as the case may be and sometimes they become so unbearable for guests and celebrants. But it looks sort of different here. How have you been able to achieve that?

If I have my way I won’t comment on that because our youths all over are the same. It’s not like it used to be during our own time but then, we’ve been able to manage the situation by encouraging them to go to school, supporting them in the area of employment and from time to time we give talks to them so that they would amend their negative ways. Sometimes ago, I had an intervention fund that I was using to support the education of those who couldn’t afford their school fees. I recall that there was a particular fellow who graduated but had no resources to go to the law school; we spent a lot on his post-university education. So that has encouraged them and that has made them realize that if you do well, the palace will support you. And I try as much as possible not to be too high-handed and not to be too harsh on them. I believe in conciliatory moves which I have been making, I hold peaceful interactions with them, encouraging them to be always useful to the community. That is why we’ve been able to record this level of a corporation from the youths.

Finally sir, 10 years and beyond, what should the people of Ilawe, Ekiti and South-westerners as a whole look forward to?

Well, I look forward to the future with determination and the belief that the future will be bright for this community. We are destined to be great and certainly, we shall be. I look forward to a future where we will have a higher institution in the community. We are getting there gradually, thank God that a branch of the law school has been earmarked for us already, we are waiting for the concurrence of the House of Representatives and the accent of Mr President. I look forward to a town where we have industries where we can get employment for our children. I look forward to a town where all our children will be making it in their various chosen professions whether in the military, in education and in all spheres of life. The future is very bright and by the grace of the Almighty God, the sky is not going to be our limit, it is going to be our starting point.

How I Transformed ILAWE EKITI In Just 10 Years – Alawe Of ILAWE-EKITI, Oba ADEBANJI was last modified: May 10th, 2022 by Damilare Salami

How EYO Was Brought To LAGOS From...