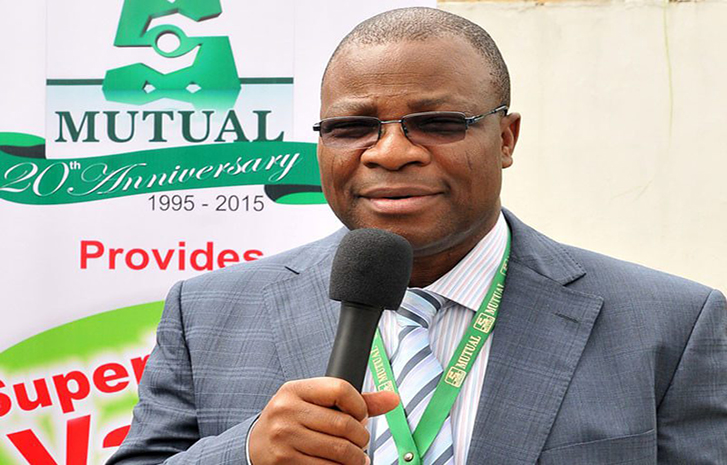 Since the declaration of Senator Adeleke, the Senator representing Osun West Senatorial District, Senator Demola Adeleke as the winner of the July 21st Osun PDP primary election, one of his co-aspirants in the contest, Akin Ogunbiyi has condemned the whole process which produced Adeleke.

Another popular aspirant in the contest, Alhaji Fatai Akinbade had Fifty Two (52) votes, Barr. Nathaniel Oke polled Three (3) votes and void votes were Fifty Six (56). Number of accredited delegates were put at Three Thousand, Four Hundred and Forty Eight (3,448) and the total votes cast was Three Thousand, Two Hundred and Forty Two (3,242). And Adeleke’s name has since been forwarded to the Independent National Electoral Commission (INEC) as PDP’s candidate in the coming September 22nd, 2018 governorship elections in Osun State.

Dr. Akin Ogunbiyi has not only faulted the process and rejected outcome of the election, he has petitioned the PDP National Working Committee and Gubernatorial Electoral Appeal Panel , challenging results of the primary and Sen. Demola Adeleke’s eligibility to have participated in the election, as stipulated by law. Ogunbiyi Is thereby requesting to be declare the winner of Osun PDP primary and the party’s governorship candidate.

Below are the details of his petition and requests:

“I, Dr Akin Ogunbiyi, a gubernatorial aspirant on the platform of our great party, the People’s Democratic Party hereby submit my petition against the conduct and the outcome of the just concluded gubernatorial primaries for Osun State held at GMT Hotel, Osogbo, Osun State on Saturday, 21st July, 2018

1 That I am a card carrying and financial member of the People’s Democratic Party from ward 5 of Ayedire Local Government of Osun State.

5.That the following were results as announced by the Gubernatorial Primary Electoral Panel headed by His Excellency Seriake Dickson at the venue of the primaries.

1.1. I wish to submit that Senator Nurudeen Ademola Adeleke is not eligible to contest as Gubernatorial candidate of the PDP having failed to meet the requirements as stipulated by Section 177 (D) of the Constitution of the Federal Republic of Nigeria 1999 (as amended).

1.2. Senator Ademola Adeleke submitted a document purported to be a testimonial as evidence that he was educated up to Senior Secondary certificate which is NOT suffice to meet the basic qualifications stipulated by the Constitution and the Electoral Act.

1.3. The date of issue on the purported testimonial submitted by Senator Adeleke was altered with biro pen.

1.4. The Principal of Muslim Grammar School, Ede, Osun state Mr Khalid A. Abbas who purportedly signed the testimonial had not been posted to the school in question as at the date indicated on the document.

1.5. The Principal who purportedly issued the testimonial to Senator Adeleke has denied ever issuing or signing it and the denial is very well on record.

1.6. I hereby put Senator Nurudeen Ademola Adeleke to the strictest proof of his eligibility and demand that he proves same to the contrary.

1.7. The obvious implications of 1.1 to 1.6 above are that PDP will NOT have an eligible gubernatorial candidate in the forthcoming September 22, 2018 elections if Senator Ademola Adeleke is fielded.

2.1. Contrary to Section 30, Sub section E of the Electoral Guidelines for Primary Elections 2018, the total number of delegates accredited for the primary elections was not announced BEFORE the commencement of voting. However, at the end of the whole exercise , the Chairman of the panel announced 3,246 as total accredited delegates which is contrary to figures subsequently entered on the result sheet as 3242 (video evidence attached)

2.2. Declarations of materials before the commencement of the primaries were not done. Consequently, the numbers of ballot papers, delegate tags, number of accredited delegates were not made public before the commencement of accreditation. One of our agents, Mr Mudashiru Lukman raised this issue with the Electoral Panel Chairman but he declined and rebuffed the request.

2.3. Contrary to Section 30 D of the Electoral Guidelines, accreditation and voting were done simultaneously, allowing for the manipulation of the voting process.

2.4. Contrary to Section 30 F, many unaccredited delegates were allowed to vote without tags or any form of identification numbers. Some delegates had multiple tags which our agents detected and brought to the attention of His Excellency Dr Babangida Aliyu.

2.5. At some point during actual voting, the official delegate list was suspended from use and the LGA Chairmen and Secretaries were requested to compile their list and accredit delegates for the voting. Thus, for some category of delegates from Ejigbo, Ilesa East, Odo-Otin, Boluwaduro etc, the published list of delegates was not used. Our agents complained about this but the panel ignored it.

2.6. Midway into the accreditation, additional six (6) points were created, but the panel did not allow us to bring in additional agents to man those points whereas the other aspirants were given the opportunity to increase the number of their agents.

3.2 Many illiterate delegates were denied the right to choose who should write the name of their preferred candidate on their behalf, which may have been responsible for the large number of purported void votes.

3.3 Voting was suspended for about 1 hour, when there was protest on the process which was skewed in favour of Senator Demola Adeleke

4.0  SORTING AND COUNTING OF VOTES

4.1 Ballot papers were sorted according to the four (4) participating aspirants and void votes.

4.2 During the process of sorting, a significant number of votes casted for me were wrongly counted as invalid despite protest by my agents.

4.3 All the aspirants’ votes were counted loudly and publicly, except mine which form the basis of the first announcement of vote allocated to each aspirant until my agent protested and demanded for a recount.

4.4  While vocal voice counting of Senator Ademola Adeleke counting was going on, Mrs Sarah Ochepke unilaterally began silent counting in company of another panel member, contrary to electoral practice and what was done in the case of other aspirants. Based on the outcome of that silent counting, I pulled a total of 1,690 votes which was pencilled down in a piece of paper and handed to our agent. Immediately after this, the electric supply to the hall was sabotaged and the entire place was thrown into darkness for about 10 minutes giving room for the tampering of the ballot papers which were in the custody of Mrs Sarah Ochekpe. All these activities are recorded and beamed live.

4.5 It was at the insistence of my agent, that a recount of my votes were carried out which was now done with a loud voice counting, leading to a reduction of the difference between my vote and that of Senator Ademola Adeleke by 3 votes, confirming that the counting process was initially flawed.

4.6 The insistence of my agents that all other aspirants’ votes, including the purported void votes to be recounted as was done in my case was vehemently declined by the panel Chairman.

4.7 As an apparent testimony to the poor handling or pre-meditated action against my candidacy, some of my ballot papers were picked on the floor after counting and the panel chairman deliberately threw them into one of the baskets under his table.

4.8 The result sheet was not given at the conclusion of the exercise but was only received on my behalf by my agent, Mr Mudashiru Lukman at about 2.10pm on Sunday, 22nd July, 2018 which is a clear 18 hours after the completion of the elections consequent upon the SMS sent to my agent at 10.35am on sunday. This result sheet is DEFECTIVE.This is contrary to section 31 B of the electoral guidline.

5.1 At the end of the declaration of results, the panel announced as follows:

a). From the above findings and declaration, there is a difference of 183 votes that could not be accounted for. Out of this 128 votes belong to me. This tallies with the handwritten result of 1,690 handed over to my agent by one of the panel members who participated in the silent counting in the presence of my agent (1,690 (excluding the purportedly invalid votes of 42) – 1,562 = 128)

In view of the foregoing, it is evident that the whole process was skewed against my candidacy and the conduct fell short of the provisions of the electoral guidelines for the gubernatorial primary election of the party.

(2)  In the alternative to prayer No 1, the 42 valid votes cast for me which were wrongly declared invalid be added to my votes and declared accordingly.

(3) That the 128 votes belonging me which were tampered with during the counting process be also added to my votes.

(4) That based on 2 & 3 above, the Appeal Panel is humbly requested to consider an adoption of any of the three alternatives stated hereunder as my total number of votes scored in the gubernatorial primary:

Thank you for the opportunity to present the facts and your resolve to take the path of justice, fairness and equity in the dispensation of justice and rule of law by your electoral appeal panel and our great party.”

Though the primary election had come and gone; winner has emerged, but the process and final results of the keenly contested poll has left people with so much to ponder on. While those in Ogunbiyi’s camp believed that they were tactically rigged out of the primary election, the Adeleke’s camp are of a contrary opinion. They are of the strong conviction that Ogunbiyi’s popularity couldn’t have won him the more votes than Adeleke who is more on ground and has family name working for him .

Apart from the fact that Ogunbiyi is seen as a fresher in Osun politics in some quarter, some see him as an agent of the National Leader of APC, Asiwaju Bola Tinubu planted in PDP. That was what was part of gimmicks sold to PDP at the Federal and that some believed really worked against him. Was Ogunbiyi out-spent at the poll?

The answer is definitely no; both of the top two aspirants are financially capable and they matched one another power for power and money for money. And that showed clearly in the results, it was so close (1569 and 1562).  An unconfirmed report has it  that Akin Ogunbiyi gave each delegate the sum of 250k as initial payment while Demola Adeleke paid 150k.

The Election And Last Minute Permutations That Changed  The Whole Game.

But It was exclusively gathered that Rt. Hon. Adejare Bello, Barr. Nathaniel Oke (SAN), Prof. Adeolu Durotoye, Akogun Lere Oyewunmi and Adewopo worked for the emergence of Adeleke. While the likes of Sen. Olasunkanmi Akinlabi, Sen. Ogunwale, Jide Adeniji and Barr. Nathaniel Oke pinched their tent with Akin Ogunbiyi. Alhaji Fatai Akinbade was neutral. Having sensed the danger ahead, Demola Adeleke was said to have, three days before the election, camped (at an undisclosed hotel) about 1,500 delegates, who stormed the election venue in a uniformed Ankara, shortly after the commencement of delegates’ acredictation.

Osun has 30 local governments with 322 wards and over 3000 delegates who participated in the primary election. The election, earlier scheduled to hold at Osogbo Stadium but moved to GMT Event Centre due to security reason, was held amidst a very tight security. Under the supervision of His Excellence Gov. Seriake Dickson, Chairman Electoral Committee for Osun PDP guver primaries. In the committee was also the former governor of Niger State, Babangida Aliyu, Mrs Sarah Ochekpe and others.

‘How I Was Rigged Out Of OSUN PDP Primaries’ – PDP Aspirant AKIN OGUNBIYI Reveals A Lot In His Petition was last modified: July 31st, 2018 by Dare Adeniran