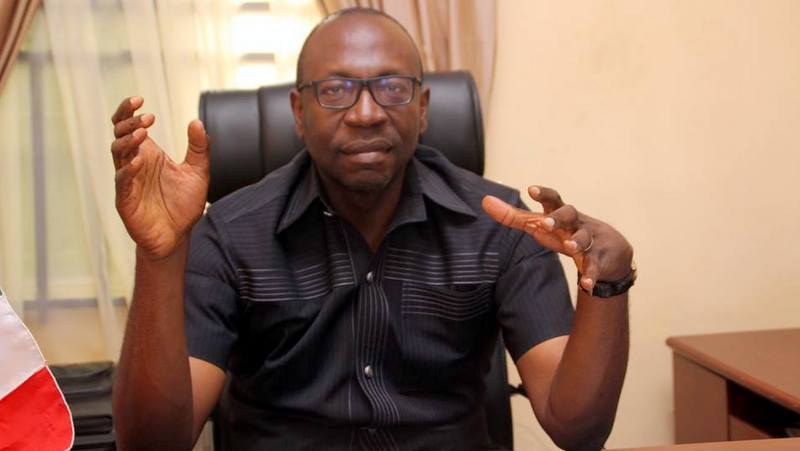 The Peoples Democratic Party (PDP) governorship candidate in the 2016 Edo State election, Pastor Ize-Iyamu Osagie, is set to defect to the All Progressives Congress (APC) in  a bid to vie for next year’s gubernatorial polls, a move that may alter the political template of the state.

Barely eight months to the 2020 governorship election in Edo State, the search for possible “replacement” of Governor Godwin Obaseki of the All Progressives Congress (APC), is glaring due to the bickering between him and the National Chairman of the party, Comrade Adams Oshiomhole.

Oshiomole and Obaseki, have been in supremacy battle over the latter’s second term bid following the squabble between the duo.

The governor, it was gathered, was accused of not “patronizing” party leaders, especially Oshiomhole’s foot soldiers after helping him to win the 2016 governorship election.

After being sworn-in, Obaseki allegedly introduced a new order and banned politicians and party leaders from the government house and declared that the state resources is not meant for sharing but for the development of the state.

Daily Trust Saturday learnt that apparently Oshiomhole felt betrayed by his political godson and asked his loyalists to shop for a possible replacement for Obaseki who he defiled all odds to “install” as governor.

Interestingly, the unabated crisis culminated in the formation of the Edo Peoples Movement (EPM), by a section of the APC believed to be Oshiomhole’s loyalists.

An insider source told our reporter that shortly after that, the EPM was said to have been given the mandate to shop for a replacement of Governor Obaseki. Immediately, some names came up. They include Chris Ogiewonyi, Maj-Gen. Charles Airhiavbere (rtd) Pius Odubu and Captain Hosa Okunbo among others.

The source said Okunbo was approached to become a candidate based on his financial muscle and in the believe that he can sponsor the election if Obaseki eventually lost the ticket.

The source also said that Captain Okunbo declined the offer but requested that Pastor Ize-Iyamu Osagie, the gubernatorial candidate of the Peoples Democratic Party (PDP) in the 2016 governorship election be drafted into the APC and possibly given the ticket before rendering any help.

Following the development, Oshiomhole was said to have met Ize-Iyamu in one of his flights from Benin to Abuja when the deal to return to the APC was struck with a promise of the APC ticket.

But Obaseki during the Alaghodaro Summit declared that his second tenure was assured and it was only the people that can determine who govern the state.

Meanwhile, speaking on the alleged defection, Pastor Ize-Iyamu said his planned move was at the instance of his loyalists.

Ize-Iyamu who had been at a loggerheads with the PDP in the state, said he succumbed to pressure from his supporters because of the disarray within the rank of the PDP.

He said that having done his best to reconcile the warring parties within the PDP without success, he decided to call it quit and was fully set to join the APC.

He said, “It is true that I am leaving the PDP for the APC. I am not defecting but merely returning home. I am quitting the PDP because of the too many problems bedeviling the party which I have tried in my own way to resolve without success. It is not a rumour, I am going back home to APC,” he said.

Pundits believe that federal appointments in the state sparked another round of crisis between Oshiomhole and Obaseki as the latter was alleged to have been denied input in all the appointments from the state.

It was gathered that as at the last count, there are over 15 federal appointments from the state with no evidence of the governor’s inputs a development pundits say raises concern over any hope of reconciliation between the political actors.

In July, Obaseki was said to have cried out at a meeting with members of Benin Community residents in the Federal Capital Territory, Abuja, over his relegation to the background when federal appointments are made from the state.

“I have endured so much as governor. As governor, I have not been able to even nominate somebody for a federal appointment and federal appointments are made every day. I will sit down they will call me from the Senate. ‘Are you aware of this?’ I keep quiet. I have said it that at the end of the day, I only have one mandate to serve Edo people and as long as God has given me this opportunity, I will not allow Edo State to be a pawn in anybody’s political chess game,” he said.

The recent alleged suspension and counter-suspension of Oshiomhole and Obaseki is directly linked to the 2020 governorship ticket which Ize-Iyamu is clearly angling.

In fact barely 24 hours after the suspension of Oshiomhole, a faction of the party who are members of the EPM, announced the suspension of Governor Obaseki, his deputy, Phillips Shaibu, Secretary to the State Government, Osarodion Ogie and the party state chairman, Anslem Ojezua.

Speaking during a meeting at the residence of Maj.-Gen. Airhiavbere (rtd), the spokesperson of the group, Patrick Ikhariale, alleged that Obaseki struck a deal with the PDP to run on the party’s platform in the 2020 governorship election.

Ikhariale claimed the governor had already paid N3 billion to secure the PDP ticket for the forthcoming election, an allegation which the Edo State chairman of the PDP, Chief Dan Orbih has described as untrue.

As it is, many areas still remained unearth in the move by Ize-Iyamu to return to the APC to take up the governorship ticket and whether Obaseki will move to the PDP for it ticket. The attention will turn to Edo State after the governorship polls in Kogi and Bayelsa states.