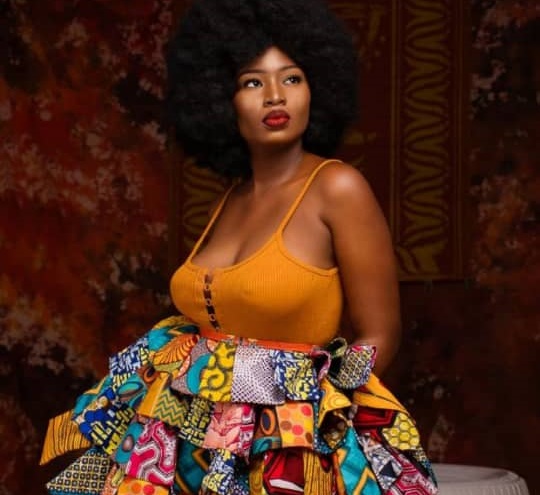 Adebimpe Oyebade is one of Nigeria’s female actress that has turned Nigeria movie scene into fancy of the rest of the world. She has one thing going for her, and it’s her natural look. While many of her colleagues think that the key to beauty lies in the bottom of their makeup bag, the actress has a different perception.

Oyebade Adebimpe is a famous Nollywood actress, model, television personality, and entrepreneur. She was born on born on March 23, 1994 raised in Akure, the Ondo State capital but originally from Ijero, ekiti in Ekiti State.

Mo Bimpe as fondly called, acts in both English and Yoruba movies. Oyebade Adebhimpe started off her career as a model. She has worked with top brands such as House of Tara, Glam Cosmetics and so on.
She joined the Nigerian movie industry (Nollywood) in 2017 and started attending movie auditions and acting as minor character in movies. She has acted in movies like Agbede Meji, Secret, Assurance, The Fault, Oloore, Romance, Entrapped, Tranquility, Dear Sister, Shadows, Irapada, Adebimpe Omo Oba, Abike Oni, Silent Cry, Vow, Delusion and many more.

She started her acting career in 2017 where she got her first role in the movie “Agbede Meji” as produced by Yomi Fabiyi and that same movie brought her to limelight.

Adebimpe has starred in more than 50 movies Imole Ife, Ponle, Ayetimowa, Romance, Wounded, Layo, Osupa Aje and so on.

She has produced numerous movies such as; “Dear Sister”, “Jade’s Cross” as directed by Abbey Lanre and “Entrappped” which features the likes of Odunlade Adekola, Lateef Adedimeji, Bukola Adedeyo, Temitope Solaja, Ibrahim Itele Yekini, Taiwo Hassan and many others.
Mo Bimpe is very beautiful and currently one of the most beautiful actresses in Nigeria.
Aside acting, she’s an entrepreneur; the C.E.O of Moluxury brand where she has worked with other numerous brands, magazines, photographers, Stylists, makeup artists, fashion designers, hair extension companies and so on.
Adebimpe Oyebade has won several awards which include: City People Movie Award for Best New Actress of the Year ( Yoruba), Breakout star of the year at the 5th edition of the Annual MAYA Awards.
She has also got nominations such as Best indigenous movie at Africa Magic Viewers Choice Awards.
City People Movie Award for Most Promising Actress of the Year (Yoruba).

Barely 4 years in the industry, Adebimpe has acquired a reputation of being herself and someone that’s not necessarily flamboyant. She is excellent at her craft and she’s no doubt holding her place in the industry.

How Mo_Bimpe Built Her Undefeated Brand In The Movie Industry Within 3 Years was last modified: July 3rd, 2020 by Reporter

Nigerian-Ghanaian Based star, Focus Onpoint has released a brand-new song titled “One Day”

THE MARIO EXPERIENCE 2.0 Set To Hold In Lagos