How My FIBROID Was Treated In Just 1 Hour – Patient, PATRICIA OMOKE Reveals 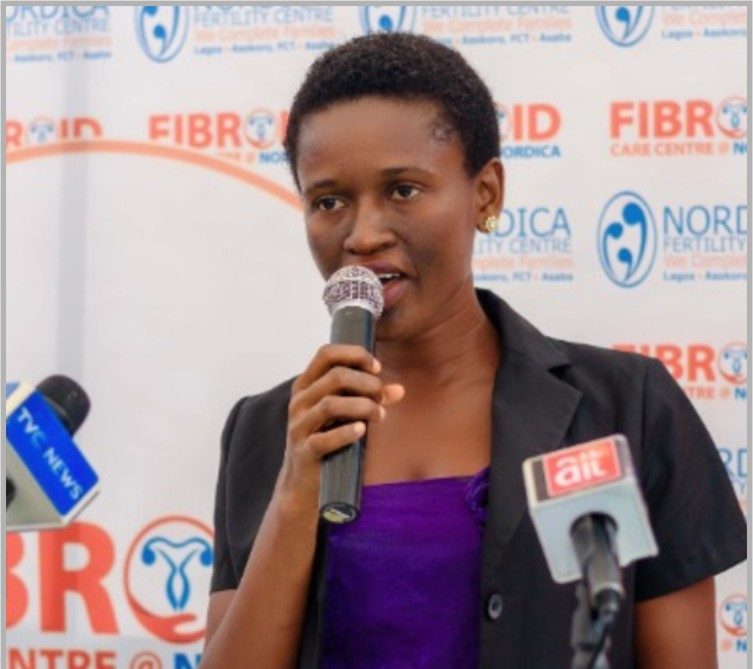 Patricia Omoke is a 38-year-old single lady who works as an admin hospital at a specialist hospital in Lagos. Like many other African women, she was diagnosed with uterine fibroid but was afraid of going through the knives. According to her, she had made use of several supplements to treat the condition with little or no result. Patricia had her fibroids treatment on the 25th of June, 2021 and after a few hours, she was back on her feet.

“I was actually diagnosed with fibroids in 2018 and since then, it has been from one problem to another. But with my knowledge and experience of HIFU through Nordica fertility centre, everything has changed. What I feel about the treatment is pure excitement and a good thing for our generation”.

Her story is from that status of hopelessness to unfathomable joy. She is the symbol of hope for many Nigerian women who have given up on living a normal life because of their fibroid condition.

On Friday, July 9, 2021, Patricia Spoke with City People’s DAMILARE SALAMI 08155134152 about her fibroid condition, her many terrible experiences and how HIFU came to her rescue through Nordica Foundation. Below are excerpts from the interview for your reading pleasure.

It all started when I did my first scan in 2018 and ever since I had started looking for solutions. I am someone who doesn’t like surgery so I did everything possible apart from surgery. I took supplements and while I was doing that, I also searched online and I have come across NGOs like Dr Save a life and in the process, I came across HIFU too.

Is that to say that you’ve never had surgery?

No, I am actually scared of open surgery. I can’t stand being cut and the pain thereafter is unbearable for me. I have been asked by the doctors to go for open surgery so as to ease my pains but I refused.

How long did you carry the fibroid?

As I said earlier, I got to know that I had fibroid when I did the first scan and that was in 2018. It was confirmed after the scan.

When did you have the HIFU treatment?

What was the experience like compared to other treatments that you know about or have attempted?

The whole experience is one thing I cannot forget because it all started with the usual feeling of anxiety. I was scared being the first woman to use this technology in West Africa, I had to go through the process of getting the patient ready, checking of temperature, laying down flat for a very long time and all that. But the whole procedure didn’t last longer than an hour and five minutes. In fact, as at the time they finished, I was asking the attendants when the whole process was going to start when I was told that we are done. I was prepped to get ready to withstand a temperature of about sixty degrees centigrade and above; I was preparing for that in my mind when I was told that we had finished the entire process. I kept asking, again and again, to be doubly sure about the success and it was affirmed that the process was successful. I couldn’t believe that in just an hour and five minutes, my scary fibroid status was gone.

Did you have any pre-knowledge about the whole process before it started?

Yes. Before we started, I was told everything about the process before we started. I was made to understand that the process kills the fibroid and there is not going to be any form of cutting or the use of the knife. I was also told that it takes some time before the body absorbs the dead fibroid. Depending on the position of the fibroid, the body passes those that are in the uterus out immediately after the HIFU treatment while the one inside the muscle dies and the system absorbs it.

What kind of pains did you have during the process?

The pain I had majorly was back pain due to the fact that I was lying still in the same position for a long time and when I got up, the pain vanished almost immediately. The second kind of pain I felt was that of the fibroid itself. Anytime I lie down, I always feel it breathe but after the process, I didn’t feel anything of such.

What do you have to say to the brain behind this new technology?

I just want to use this opportunity to thank Dr Abayomi Ajayi and the entire HIFU team for enabling me to benefit from this scheme. Before now, I used to think if you don’t have the money or the right connection, you may not have access to this kind of quality healthcare service but Nordica has just proven me wrong. I pray that God will continue to bless and keep them.

How My FIBROID Was Treated In Just 1 Hour – Patient, PATRICIA OMOKE Reveals was last modified: July 21st, 2021 by Damilare Salami

FirstBank Celebrates 2021 Corporate Responsibility and Sustainability Week, Calls for All to Adopt Kindness as a Way of Life

Why IVF Cycles May Fail – Fertility...

These are the signs and symptoms of...