How Pastor T.B. JOSHUA Was Buried In LAGOS 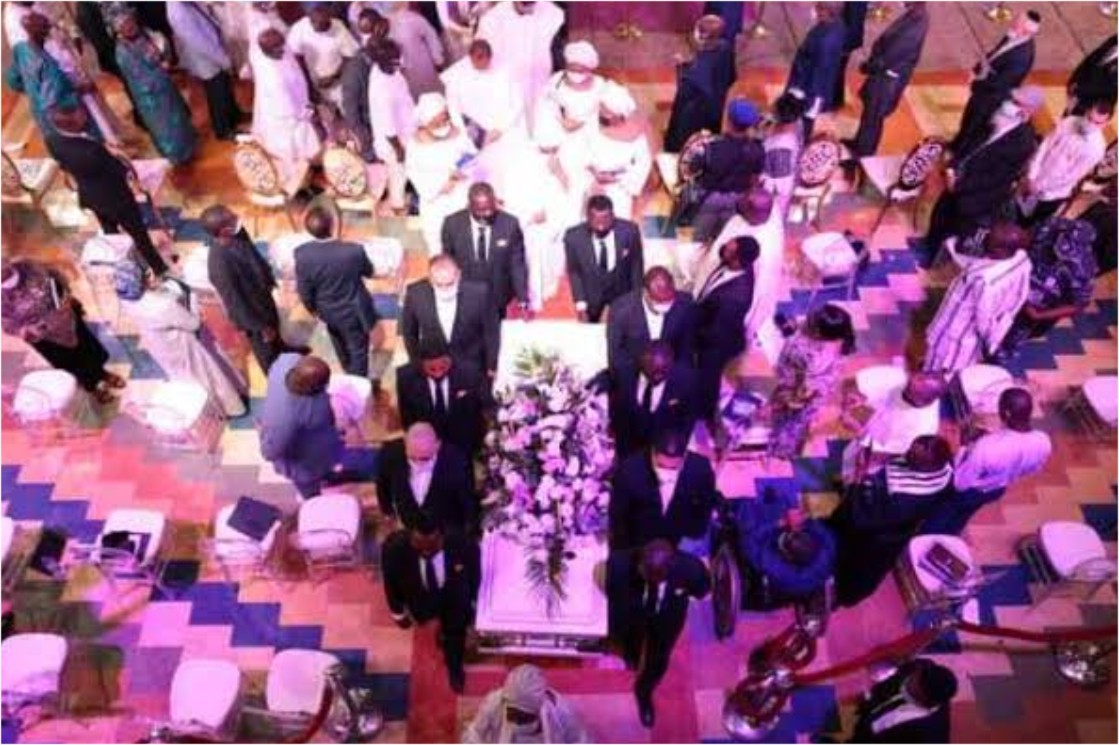 ALL HOTELS AT IKOTUN-EGBE WERE BOOKED

Popular Nigerian televangelist TB Joshua, has been buried in Lagos after a week of funeral rites.

Thousands of mourners attended the burial service at his Synagogue of Church of All Nations (SCOAN), in the Ikotun area of Lagos. The 57-year-old died on 5 June after a brief illness, the church said.

Temitope Balogun Joshua was revered by people from around the world and tens of thousands of people attended his weekly services.

The burial ceremony took place at the church building at Ikotun-Egbe from Monday, July 5 to Friday, July 9, 2021, and the Egbe community witnessed the largest gathering of crowd clustered in front of the church to pay last respect to the late prophet. City People’s SEUN JOSEPH brings you the blow-by-blow account of what went down at the final burial ceremony

The death of TB Joshua reveals how much he’s loved by many people despite the controversy that he had to deal with while he was alive. Many great men and women from around the world came to witness the one-week-long burial ceremony and lodged at various hotels around the Synagogue church. Barely two days into the event, it was discovered that all hotel rooms around Ikotun, Liasu, Egbe, Agodo and its environs have all been booked by visitors and sympathizers who flew in from various countries to witness the interment service for TB Joshua.

One thing that will shock you is the love that the people of Egbe and Ikotun showed for the late prophet, during his burial service. Shops were closed, but the traders didn’t stay at home. Artisans, drivers, vocation workers all stood peacefully in front of the church. There was no chaos. There was no stampede. They were sober and peaceful. The people stood for hours just to witness the eternal passage of the man of God and pay their last respect, even though there was no space to accommodate the thousands of crowd who stood in front of the church.

We can tell you for free that despite the huge turnout of people at the burial ceremony, the organizers did not lose coordination in ensuring that all COVID-19 protocols are observed by every guest at the event. Ushers and security officials were positioned at every gate that led to the synagogue Church, carrying sanitisers are temperature checking devices. Nose masks were also made available for people who are not wearing one. A team of safety experts from the Lagos State Safety Commission was also on ground to advise on safety guidelines, while the service was ongoing.

Ondo State Governor, who was at the programme spoke highly of the late prophet, said that what the he has achieved in his lifetime may take forever for anyone to achieve. He said that TB Joshua is the only pastor he knows that will visit a governor and bring money as a gift to the governor instead of collecting from them. He stated that TB Joshua was never far from home, and he has executed many major projects that some governors may not be able to compete with.

Akeredolu said that Joshua contributed immensely to the emancipation of the downtrodden, orphans, widows and special people. He said that the late prophet touched the lives of a lot of people economically and spiritually.

“He was not born with a silver spoon but from what I heard, he was a special child because he performed miracles even from primary school. “He was born with a special gift and his love was not only for the less privileged, but even those of us who are privileged also benefited from his love,” Akeredolu said.

Governor of Lagos State, Gov. Babajide Sanwolu, who was represented by the Commissioner for Home Affairs, Hon. Olarewaju Elegushi told the congregation that the late prophet fulfilled his destiny on earth by living for others. He encouraged Christians to adopt the spirit of dedication shown by the SCOAN founder. “His life should encourage us to renew our hope in Christ. “Unity, peace, progress and love should be our watchword as Christians,” he said. Sanwo-Olu urged Christians to emulate the late prophet’s life and live in peace with everyone without discriminating.

Delivering the sermon, Bishop Stephen Ogedengbe, of Wisdom of Chapel Ministry urged Christians to emulate the exemplary life of love to humanity shown by the late founder of SCOAN during his life on Earth.

Ogedengbe told Christians to remember that the character of a true believer “is to find refuge in our Lord Jesus. “That is why the children of God are not afraid in reaching the final destination, death. “Heaven is our home, our dwelling place.” According to him, the late prophet had always mentioned that “those who are from above, long to be there”.

TB Joshua’s widow, Evelyn, said that her 31 years of marriage to the cleric was not without trials, adding that her husband taught her to understand that trials strengthened the children of God. She said she will miss her late husband dearly. Evelyn said: “You grew the church from an eight-member assembly sitting on a mat, to the level we are today. You grew me to be the woman I am today. I stand here today to say thank you for choosing me, caring for me and nurturing me.

“Thank you for being a good father to the children; thank you for shielding me from those who were bent on soiling our lives. You were undeterred. It’s sad I won’t be able to feed you again

The cleric’s first daughter, Mrs. Sarah Joshua-Moshi, said that her father taught her everything she knew about the word of God. She said: “He told me that the work of God is beautiful. Indeed you lived a life of sacrifice till your last moment on earth. I will truly miss your conversations with me. I will truly miss your wisdom.” The prophet’s second and third daughters, Promise and Hart, also poured encomiums on him, describing him as a great man and loving father.

I REGRET NOT PLAYING INSTRUMENT AT SYNAGOGUE – GUEST

One of the sympathizers who came to witness the ceremony was interviewed by City People when he suddenly broke down in the middle of the programme. Speaking with City People, the man, Joju Olamiposi, stated that the man who was playing piano for Synagogue got a scholarship to study abroad and he hinted him about the vacant space he would be leaving behind.

“After I told my mother that I will be attending Synagogue Church to work as a pianist, my mother rebuked me and told me not to think about it. Coming to this place and seeing how everything is run, I wish I did not take that opportunity for granted that day. I really regret I did not come to play piano for Synagogue”, he said.

DO YOU KNOW THAT ALL LANGUAGES ARE SPOKEN IN SYNAGOGUE CHURCH?

Yes! You heard that right. All languages of the world are spoken at the Synagogue church of all Nations in Egbe. You will be shocked how big the auditorium is, and citizens from every language are standing by to translate the church sermon their native languages across the world; English French, Swahili, Chinese, Japanese, India, Arabic etc.

When you hear about the philanthropic gestures of TB Joshua, know that it goes beyond his faith. Islamic associations who attended the burial said TB Joshua never segregated Muslims from Christians when he is giving food items. They said he also distributed rams to mosques and Imams during festive seasons and also gave cash gifts along with the ram, just in case they can’t afford ingredients to cook the rams.

He also extends this gesture to old people.

Two caskets were used for TB Joshua’s burial ceremony. The first was a transparent carrier that was used for his lying in state and night of tribute. The second was a luxury white paint finish, split top, satin interior with fixed rail handles. It is estimated to cost around 10 million naira. TOS Funerals was in charge of the burial rites.

READ ALSO: WHAT THESE 50 IJEBU AGE GRADE GROUPS WILL DO ON OJUDE OBA DAY, DESPITE CANCELLATION

How Pastor T.B. JOSHUA Was Buried In LAGOS was last modified: July 13th, 2021 by Seun Emmanuel

What These 50 IJEBU Age Grade Groups Will Do On OJUDE OBA Day, Despite Cancellation