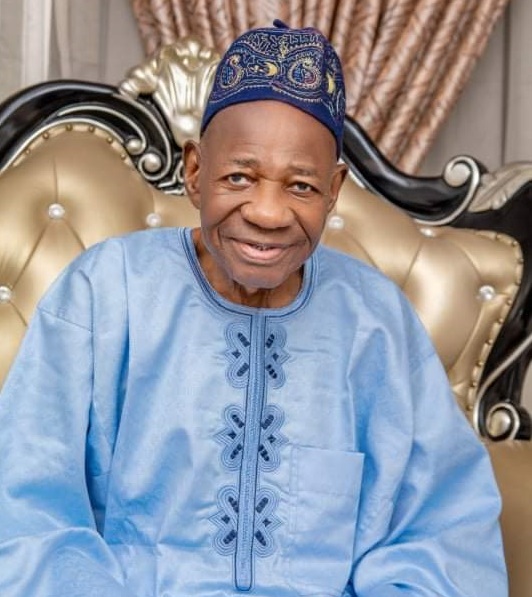 The sleepy town of Aiyepe Ijebu came alive on Sunday 8th May 2022, when the remains of popular Ijebu industrialist, Alhaji Prince Shafi Mobolaji Shittu was laid to rest in his sprawling Aiyepe compound.
A lot of Aiyepe indigenes and residents trooped out in huge numbers to pay their last respect to this great man who was the Baba Adinni of Aiyepe. Guests and well-wishers drove in from all the adjoining Ijebu towns and also from Lagos.

Late Alhaji Shafi has many accomplished children who live both in Nigeria and the US, and some of them flew in to be part of the burial. Two of his daughters flew in from the US to witness the burial. They arrived in Aiyepe just in time, as the remains of Papa was just being lowered into the grave.
Alhaji Shafi passed on the early morning of Saturday 7th May. And once the news broke a lot of dignitaries began to troop in to commiserate with the family. As a great and committed Muslim, a lot of Alfa and Muslim clerics and societies began to visit his house to console his widow and family members.
Because Papa left words that his burial be delayed till his daughters arrive, his burial was fixed for Sunday.
Family sources revealed that Alhaji Shafi Shittu had a premonition of death as he called to speak with many of his children and kept asking them when they would be coming to see him.

As early as 8 am on Sunday 8th, the compound began to receive the elders of Aiyepe, and Muslim leaders, who came to pay their last respect. Papa’s remains was placed at the centre of his expansive living room, as well-wishers and Muslim clerics prayed for him.

Alaiyeluwa Oba Abdul Wasiu Ademola Sobowale, the Olowu of Odolowu, Aiyepe Ijebu took charge of arrangements and worked with the family to ensure that all went well.
Hon. Olawale Shittu, the former Chairman, Odogbolu Local Government from 2012 to 2019 was on his feet all through making sure everything went according to plan. He also coordinated all the state politicians who came.

All the Muslim groups in Aiyepe and adjoining towns all came out to honour baba, who they called Baba dada.
At about 1.15 pm, the body of Baba, beautifully wrapped up in white fabric, was put in a Sienna space bus and driven in a procession to his family house on Ikenne Road, which is about 25 minutes away.
It was his grandfather’s house. His body was brought down from the bus and placed on a well laid out platform, and prayers were offered by Muslim clerics. That was the House where Alhaji’s father was born. After about 25 minutes, the procession left for the Aiyepe Central Mosque with baba’s body. That took another 25 minutes. As the procession was about to move, Prince Dapo Abiodun, the Governor of Ogun State arrived at Aiyepe and drove past, straight to the house of Baba Shittu to go and see his widow and family members.

At the Central Mosque, his body was brought down and placed outside, on the field, for prayers, by the Chief Imam of the Mosque and other Muslim clerics. About 500 Muslim faithful had gathered to pray for the repose of his soul.
Alhaji Musibau Oyefeso (Barrister), the Chairman, Aiyepe Muslim Community, Aiyepe was actively involved and he helped to coordinate the session.
Baba’s body was put back in the bus and taken home for burial. It did not take more than 30 minutes, after which service took place conducted by the Muslim clerics, headed by Sheikh Islam Mohammed Hadli Lawal.

The service was well attended by many traditional rulers and Muslim leaders. The children were advised to set up a Foundation in honour of their late dad to promote and propagate Islam.
The Awujale could not make it but he sent his 2nd in command, Oba Dagburewe of Idowa to represent him. 6 other obas were there. Advertising czar, Dr Biodun Shobanjo attended. Alhaji Sakiru Oyefeso played a pivotal role in terms of coordination. All the children of the deceased were actively involved in the arrangements. Kudos to Nike, Moni, Thobib, Adunola, Jadesola, Monti, Abolanle, Muritala, Lobito, Katola, Seki, Aasisat, Doyin, Papi, Ganiu, Tawat, Hammed, Kuburat, Dollar, Wale and their other siblings

It was a classy event. And Papa’s daughters looked so glamorous in their white outfits.

APC Cabal Plots To Get A Northerner To Replace BUHARI