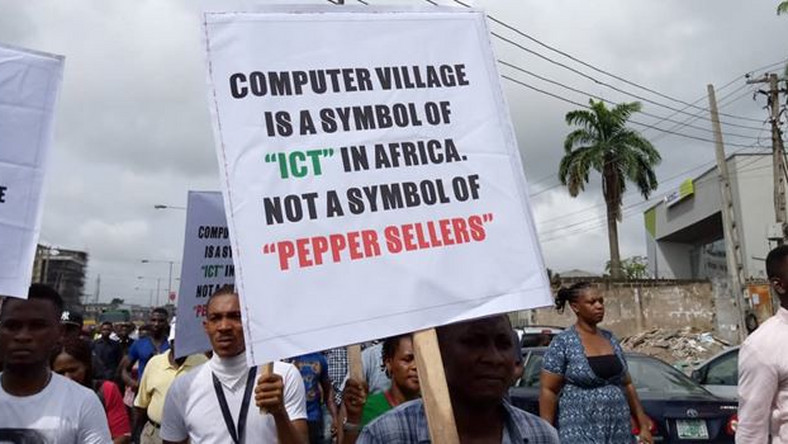 Mrs Folashade Tinubu-Ojo, The leader of traders in Lagos and the Iyaloja General of Nigeria, has maintained that some traders in the Computer village market who protested against the appointment of Iyaloja and Babaloja in the market on Tuesday were ill-informed.
Addressing a press briefing on Wednesday, Tinubu-Ojo, said all the markets in the state were under her control and the computer village market cannot be an exception.

According to our constitution, I can choose anybody from any local government in the state to head the market, all the iyaloja and babaloja in all the Lagos markets are my representatives in the market where they operate. Kindly educate them that phones, handsets, computers are commodities.

“They cannot tell us they are not pepper sellers, everybody cannot be textile dealers; they can’t tell us that computer village will be exonerated from other markets. We have the right to choose for them Iyaloja and Babaloja.

“Those people protesting never approached me to complain. They don’t have the initiative that the person leading the protest has finished his tenure and wants to remain in power…
“Computer village is not just an ICT hub, there are a lot of commodities being sold there; nobody can say it is wrong to select a babaloja and iyaloja for the market. Those that have been selected were not selected because they are Yoruba, in some of our markets in Lagos we have Igbos that were selected as market leaders,” Tinubu-Ojo said.
She said the appointment of Mrs Abisola Azeez and Mr Adeniyi Babalola, as Iyaloja and Babaloja of Computer Village respectively was done to maintain peace in the market among the traders.

I can choose anybody to be ‘Babaloja’ of computer village market – Tinubu-Ojo was last modified: May 2nd, 2019 by Reporter