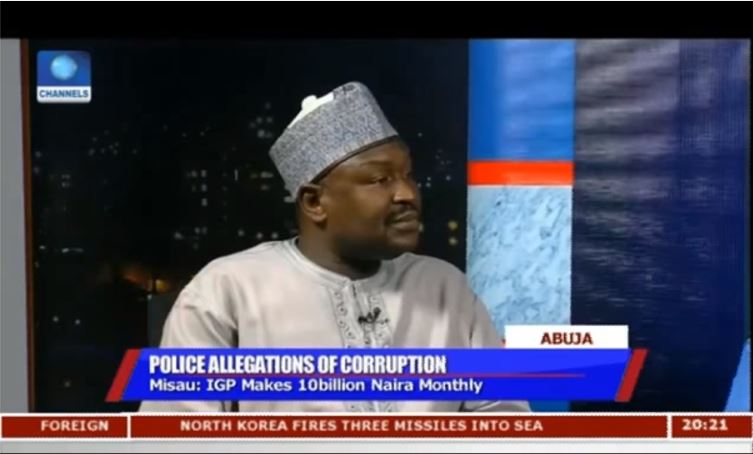 A heated debate took place on Channels Television between Chairman, Senate Committee on Navy, Senator Isah Hamma Misau and Police Public Relations officer, Jimoh Moshood.
This comes after Misau accused the Inspector-General of Police, Ibrahim Idris of extorting money, ranging from N10m to N15m, from Commissioners of Police, State Mobile Commanders and Special Protection Units (SPU) Commanders, for favorable postings.
IGP Idris also allegedly makes N10bn monthly from oil companies and other private individuals who enjoy special protection from the security agency.
Chairman, Senate Committee on Navy, Isah Hamma Misau, made these allegations on Friday, while addressing National Assembly Correspondents.
Misau said the level of corruption being perpetrated by the current Inspector-General of Police and the Chairman, Police Service Commission, IGP Mike Okiro (Rtd.), was so alarming and capable of undermining the anti-corruption stance of President Muhammadu Buhari.
“While the Police Service Commission could not deny the bribery allegation, information reaching me indicate that, even transfers of Commissioners of Police, State Mobile Commanders and SPU Commanders are also allegedly riddled in corruption.
“Some Commissioners of Police and State Mobile Commanders pay between N10m to N15m to get postings.”
Watch video below:
IG of Police N10billion Monthly Bribe Causes Serious Debate on TV Between Sen Misau And The Police (Video) was last modified: August 29th, 2017 by Arinze Ago