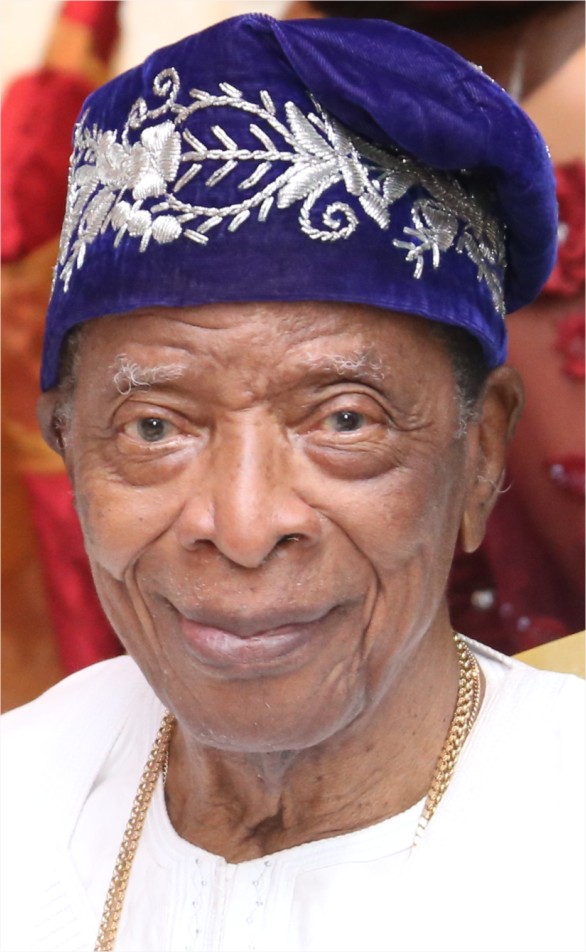 In the next few months, respected Ijebu High Chief, (Dr.) Christopher Oladipupo Ogunbanjo will be 98. And he is still waxing strong at that age. He lives in his magnificient mansion at Erunwon, near Ijebu-Ode. Chief (Dr.) Christopher Oladipupo Ogunbanjo OFR, CON was born on 14’” December 1923 into the family of the Rev. Canon Ajayi Ogunbanjo and Mama Christianah Towobola Ogunbanjo. Young Chris grew up in the Church compound under strict religious guidance. In 1938, brilliant Chris was admitted into the prestigious Igbobi College, Lagos where he passed the Cambridge School Certificate Examination with exemption from London in 1941. In 1948, precisely January ofthe year, he left the shore of Nigeria to the United Kingdom to stvdy Law, having passed his intermediate LLB. He obtained the Bachelor of Law Degree at the London University in June 1949 and was called to the Bar in Lincoln’s Inn in 1950. He became a Barrister and Solicitor of the Supreme Court of Nigeria in August 1950. He has since settled down to professional Practice and soon became a respectable member of the revered profession.

Chief Chris Ogunbanjo is one of-the pioneer members of the American Chamber of Commerce which was established in 1960. He became the president of the Chamber in 1968 and served in his capacity till 1970. Three year late i.e. 1973, the Chamber sought his leadership style again and he was elected the President in other to add more vibrancy into the Chambers activities. In 1961, Chief Chris Ogunbanjo had equally joined the Lagos Chamber of Commerce and Industry. He became an J-lonourary Life Vice-President of the Chamber in 1979. He is currently the chairman if the Centenary Foundation of the Chamber, a charity by the Chamber in 1988 to raise money for the worthy cause of promoting development of Commerce and Industry in Nigeria. He was appointed the Honourary Life-Vice- President of NACCIMA, the umbrella organization of the sector in 1983 He is also a life Patron and merit Awardee of the Nigerian British Chamber of Commerce and Industry which he helped to establish in 1977.ln 1952, Chief Ogunbanjo founded the second indigenous law firm by establishing the Law firm of Samuel, Chris and Micheal, Solicitors with the late Chief Samuel Ladoke Akintola and Hon Justice Michael A. Odesaaya as Patners. Tn 1960, he was elected as the Chairman of “Liberty” Nigerian section of the International Commission of Jurist firm became correspondent to many international law firms doing

business in igeria, He was the President of Nigerian Maritime Law Association. Chief (Dr.) Chris Ogunbanjo popularly referred to as Captain of Industry, Ventured into the arena of industrial activities due to the vast experience garnered in the corporate legal practice. Today he has diverse interest in virtually every sector of the Industrial and Commercial activities from Insurance to Banking, Glass Production, and Pharmaceuticals just to mention but a few. Unarguably over the years Chief Ogunbanjo has been and he is still an articulate spokesman for the private sector, putting across his own ideas on the best direction for the Nigerian Economy at seminars and conferences. In 1972, He was appointed as the Chair of the Nigerian Council Management Education and Training, the governing body for the study group set up by the Federal Government of Nigeria’s Industrial Policy in October 1984; amongst the committee was Chief Rasheed Gbadamosi former Chairman of NIDB. A great Philanthropist of our time and a community man, Chief Chris Ogunbanjo donates to several worthy causes and helps to shape the lives of the future generation. He built a 24-stall market for the Erunwon Community which was handed over to the Ijebu-Ode Local Government in 1989. In furtherance to his belief that economic development can only thrive in a stable society, he established a charitable institution know as “The Chris Ogunbanjo Foundation”, whose principal aims and objectives are, a. to promote the achievement of a stable society in Nigeria through proper analysis of causes of conflicts; b. to encourage the promotion of industrial society and private enterprises generally thus moving Nigeria forward from its present stage of under-development to an industrial society. This is to affirm the distinguished mark of his board room culture which is commitment to truth,justice and fair-play. He is a great advocate of transparency, honesty and accountability, refusing to yield to any suggestion of impropriety in other to oil the wheel of progress. He is an Honourary Doctorate Degree Holder from various Institution in the Country; Obafemi Awolowo University Ile-Ife (December, 1987) Doctor of Civil Law D.C.L. University of Lagos (UNILAG) (January 1988) Doctor of Law LL.D Ogun State University, Ago lwoye (January 1990) Doctor of Science D .Sc. Ladoke Akintola University of Technology, Ogbomoso (February, 2001) Doctor of Technology D. Tech. And was the councilor of the University for four years from 2001. Fellow Nigerian Academy of Education( 1977) Chief Ogunbanjo Holds two national Honours; Officer of the Order ofthe Federal Republic (OFR) 1982 and Commander of the Order ofthe Niger (CON) 2001. He was Honoured by Queen Beatrix of the Netherlands as an orange Nassau till November, 1981. A Christian of the Anglican Faith, Chief Chris Oladipupo Ogunbanjo, is the Father of ljebu Anglican Diocese. A past President and Life member of the Lagos (Doyen) Lions Club, Director Lions Club lnternational, Patron Association of Lady Pharmacists, Grand Patron Ijebu-Ode Chamber of Commerce, Industry, Mines and Agriculture. He is a Merit Awardee of the Ijebu-Ode Development Association. Distinguished Ladies and Gentlemen we present for this distinguished Award, the illustrious Son of Africa, and Icon of private enterprise in Nigeria, a baron of commerce and industry, a man of principled tenacity, the Olotu of Ijebu-Land, the Lerinja of Egbaland, the Gbadero of Lagos, Baba Oba of Erunwon, Baba Oba Oloko of ljebu lmushin and the Asiwaju of ljebu lmushin, A Philanthropist extra-ordinary, a successful corporate Lawyer, a God fearing man and our own Prophet  with Honour.