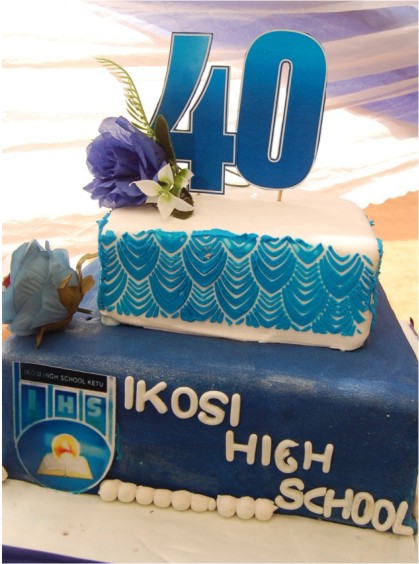 As a way of marking 40 years existence of their alma mata, Ikosi High School Old Students’ Association commissioned a hall  it built for the school.

The commissioning ceremony took place in the school premises on Wednesday 16th December, 2020 and was graced by dignitaries such as Ondo Deputy Governor, who also is an old student of the school, Mr. Lucky Aiyedatiwa; Lagos State Commissioner for Education, Mrs. Folashade Adefisayo; Chairman of Ikosi-Isheri LCDA, Princess Samiat Bada; Representative of Oba of Ikosi, Chief Jimoh Atanda, members of the association and the community.

During her speech, the Commissioner of Education, Mrs. Folashade Adefisayo extolled the visionary leadership of the former governor of the state, Alhaji Lateef Jakande.  She said part of his fruit produced the Ikosi High School, which is doing greatly today. She went further to appreciate the teachers of the school for impacting positively on the students, she called the nation’s treasure.

The commissioner commended the association for a well thought-out idea of giving back to the school that made them. She meanwhile urged the present students of the school to face their studies and toe the path of greatness by adopting the achievable and sustainable lifestyle of their role models evident in the old students’ association of the school.

She however assured the school that the government has pencilled down a number of buildings in the school to be pulled down for reconstruction.

Prior to the cutting of ribbons to mark the official commissioning of the school hall for use, the national president of the association, Revd. Femi Aladelola in his address spoke about the necessity which brought about the emergence of the school. He said before the school was founded, students in Ikosi and it’s environs risked their lives crossing the high way to attend school in Ojota. He added that the alarming rate at which these students became victims of road accident made the then community leaders to push for a secondary in the community. This he said was granted by the then government of Alhaji Lateef Jakande in 1979 bringing the school to existence in 1980.

The commissioning of the hall was done by the Commissioner of Education, Mrs. Folashade Adefisayo in company of all other dignitaries at the event.

The ceremony was funfilled and well attended by members and community people considering that it’s already December. Notable high points of the event asides the commissioning of the school’s hall was the thrilling performances from the cultural and drama group as well as sonorous songs from choirs of the school.

During the fund raising session, Revd. Aladelola gave the reason why the association took the building of the school hall commissioned upon themselves as solely to make the environment the students write their examination more conducive as the hall they met was not worthy of such. He added that there are other projects the association plans on embarking on such as construction of bore hole, renovation of classrooms which they have estimated to cost about 20 million naira. He thereby called on stakeholders within and outside the community to donate generously to cause of changing the face of the school making life better for the students.

Also worthy of note was presentation of awards to deserving individuals whose contributions to the development of the school and the society at large can not go unnoticed. These awards’ recipients are not limited to the Lagos State Commissioner for Education, Mrs. Folashade Adefisayo, Chairman of Ikosi-Isheri LCDA, Princess Samiat Bada, HRH Oba Samuel Oloyode Olukosi, past school principals, and some community leaders.

The celebration created an atmosphere for old students of the school to  relish the memories and moments shared years ago back then in the school.