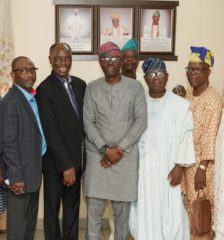 The Committee of Indigenous Associations of Lagos State, an umbrella body of all indigenes of  Lagos, has set an agenda for the state’s All Progressives Congress (APC) governorship candidate, Mr Babajide Sanwo-Olu, who is a Lagosian of the first order.If he is elected in the next month’s general election, the Lagos indigenes want the APC candidate to restore the prestige of the state by pushing for a special status for Lagos.

They also called for restoration of Lagos environment and incorporation of indigenes in the governance of the state.At a consultative meeting held at the Awori House in Oregun, the association, which comprises leaders from all the five divisions of the state, endorsed the candidacy of Sanwo-Olu, with the agreement that he would get a special status for Lagos.

They promised to stand behind the APC candidate in his effort to take the state to another level in development.Describing the Awori, the indigenous Ikorodu, the Epe inhabitants as well as the people of Isale Eko extraction as “original stakeholders” in the Lagos project, Sanwo-Olu said his intention to govern the state was not to fulfil an agenda against any ethnic group making up the state.He said the meeting was necessary to listen to the concerns of the indigenes.

The APC candidate said his reason for running for the Lagos top seat was not for personal aggrandizement, but to deploy his three-decade of professional expertise spanning both public and private sectors to elevate the fortunes of the Lagos  for the benefit of residents and indigenes of the state.He said: “Since I declared my intention to run for the governorship seat of our state, I have consulted widely with various interest groups and stakeholders in the Lagos project. I believe my consultation would not be complete  without meeting with the indigenes of the state. I’ve come to listen to your concerns as indigenes of Lagos.“I am also a son of the soil.

Sanwo-Olu allayed the fears of the Awori indigenes of Lagos, noting that his government, if elected, would address all their grievances.Beyond the quality of his academic qualifications and professional experience, the APC candidate said the most valued credential he would bring to governance is his integrity.

He promised not to betray the trust bestowed on him by the amalgamation of the indigenous Lagosians.He said: “Integrity is my greatest qualification I am putting at stake in this race to govern Lagos. My five-point programmes contained in my manifesto are carefully designed to take Lagos to a new level of development.

Everybody will be part of our government and no discriminatory agenda will be initiated against anyone, irrespective of ethnic group or status.”Responding to some of the concerns raised by the Lagos indigenes, the APC candidate promised that his government would review the physical planning and environmental laws of the state, with the aim to restore sanity and improve the mega city status of the state.He also said his administration would prioritise the provision of quality education that would be driven by technology. Under him, Sanwo-Olu said the state would revive its agriculture and improve transportation system.On the much-talked about Agboyi-Ketu Bridge, Sanwo-Olu promised that it will be constructed and delivered by his administration if elected.Sanwo-Olu dismissed the concern raised by Alhaja Aishatu Onitiri Kuye, that his choice of running mate was a discrimination against womenfolk.

The APC candidate said he had always enjoyed working with women because of their efficiency and result-oriented, promising that women would be the driver of his government.Prof Rasheed Ojikutu, one of the leaders of Awori extraction, and chairman of the coalition  described the meeting as family affair, saying it was the first time the Awori people would be united to meet and support a candidate they believed in.He urged members of the association to support the candidate, noting that Sanwo-Olu had the habit of fulfilling promises.