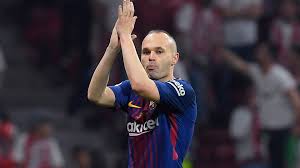 Barcelona legend, Andres Iniesta has stated that he will be moving to Japan and is expected to sign for Vissel Kobe.

The 34-year-old played his 674th and final game for the LaLiga champions, Barcelona on Sunday as they defeated Real Sociedad 1-0 in the final game of the season in the Spanish topflight League.

The midfield maestro lifted the LaLiga league trophy and addressed supporters at the Nou Camp after the final whistle.

Iniesta tweeted on Wednesday evening, while pictured on a flight with Vissel Kobe chairman, Hiroshi Mikitani, saying: “Heading to my new home, with my friend.”

Vissel Kobe had announced a news conference for Thursday, where the J-League club are expected to confirm the signing of the Spain international.

The Japanese side signed German World Cup winner, Lukas Podolski in 2017 and according to reports from Spain they beat off competition from Australia’s A-League to sign Iniesta.

He also won the 2010 World Cup and two European Championships with Spain.

Iniesta has been included in Julen Lopetegui’s 2018 World Cup squad in Russia this summer.