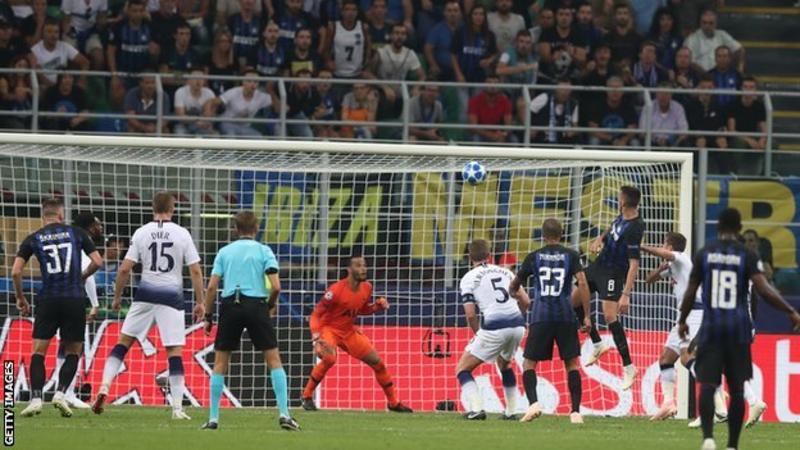 Late goals from Mauro Icardi and Matias Vecino stunned Tottenham as Inter Milan celebrated their return to the Champions League with a dramatic Group B win.

Christian Eriksen’s deflected strike earlier in the second half looked to have been decisive for Spurs, who stepped up a gear after an unconvincing first period, beset by poor passing.

However, Argentine Icardi, a peripheral figure for long periods, levelled with a 20-yard volley five minutes from time.

And Uruguayan midfielder Vecino then headed a winner in added time to send Spurs to a third consecutive defeat.

It had looked like being a good evening for Mauricio Pochettino’s side, even if they started as though back-to-back Premier League defeats by Watford and Liverpool had taken their toll.

If that encouraged a vociferous San Siro crowd, Luciano Spalleti’s team were unable to capitalise.

Instead, they carried their indifferent Serie A form – they are 15th after winning just one of their first four games – into European competition and were eventually punished by Denmark midfielder Eriksen.

The 26-year-old was the visitors’ stand-out performer and followed up on his own parried shot to give Spurs the lead with an effort that veered over goalkeeper Samir Handanovic via a nick off Inter defender Miranda.

For drama, it all looked a far cry from the clubs’ last meeting in the competition in 2010, when the Italians led 4-0 after 35 minutes before a 21-year-old Gareth Bale announced himself with a hat-trick that nearly transformed the game.

But drama there was, at the very last, as Inter first looked to have salvaged a point, and then stole all three to follow group leaders Barcelona with an opening-day win.