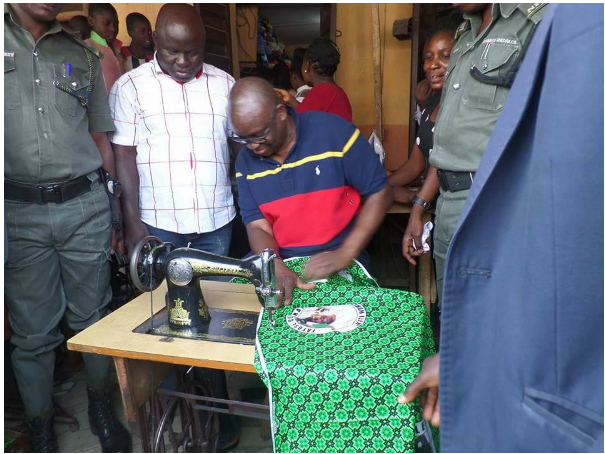 The ever controversial governor of Ekiti state, Ayodele Fayose has thrilled his fans with another comic relief after pictures of him appeared on the internet as a roadside tailor.

From sharing cakes on the streets to riding on commercial motorcycles, driving heavy duty trucks, making a joke out of a serious business (which civilian governor storms the house of assembly in camouflage and sun shade, to present a budget?), Fayose has his own style.
Two weeks ago, his media team released pictures of him “taking care of his stomach” at a restaurant in Abuja.
Now, the pictures out are those of the governor using a sewing machine in front of a seamstress shop. 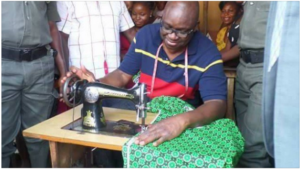 The governor feels that is his own way of celebrating with women on the occasion of the 2017 International Women’s Day.
He had earlier declared Wednesday as work free day in commemoration of the day.
According to NAN, at least 45,000 women have indicated interest in a special event which has been scheduled for the Oluyemi Kayode Stadium in Ado-Ekiti, the state capital.
The women reportedly paid N500 each to buy a branded and subsidized Ankara, which has a market value of N3,500.

Lectured at 23, borrowed to pay school fees… 7 things you didn’t know about Osinbajo