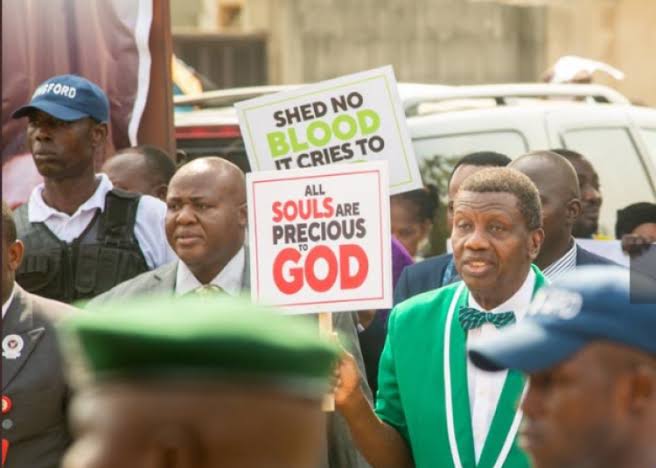 The Christian Association of Nigeria (CAN) and the General Overseer of the Redeemed Christian Church of God (RCCG), Pastor Enoch Adeboye have gotten a knock from the Nigerian Supreme Council for Islamic Affairs (NSCIA) over the protest they embarked upon against insecurity across the country last weekend.

NSCIA’s Director of Administration, Alhaji Yusuf Chinedozi Nwoha who released a statement on behalf of the group headed by the Sultan of Sokoto Muhammadu Sa’ad Abubakar, said the protest gave a political colouration to grinding insecurity fueled by hypocrisy and hubris.

The group backed President Buhari on claims of more muslims being killed by Boko Haram than Christians and also insisted that the terrorist group does not represent Islam or Muslims. NSCIA stated that claim of Boko Haram being a ploy to eliminate Christians, is being promoted by dealers camouflaging as religious leaders to their followers and the outside world.

“It is rather discomfiting and heart-rending that some misguided elements in our country have resorted to the dangerous game of playing politics with security. Political mercenaries and religious combatants united by rapacious greed and chronic hatred have occupied the public space with putrid writings and toxic speeches.

“For the sake of fleeting popularity and Twitter-trending, some public figures with ulterior motives offer themselves as willing tools in the hands of disgruntled politicians to play politics with insecurity without remembering that when the fire they are stocking becomes an uncontrollable conflagration, there would be nowhere for them to play their politics as the nation would have been consumed. It is a failure of education the people goaded by ambition cannot see the big picture and the danger inherent in their actions.

“In essence, rather than see the monstrosity that insecurity has become a national challenge that requires collective action, agents of destabilisation seek to score cheap political goals and engage in self-indicting propaganda.

“One of them is the recently organised street show by some religious leaders who give political coloration to grinding insecurity fueled by hypocrisy and hubris.

“But efforts must be doubled through the instrumentality of hard work and prayers so that the enemies of Nigeria will be unveiled and this is where Government must double or triple its efforts at counter-insecurity measures.

“It is, therefore, the height of insincerity, wickedness, falsehood and hypocrisy to suggest that Boko Haram is a ploy to eliminate Christians, a dummy being promoted by some dealers camouflaging as religious leaders to their followers and the outside world.”