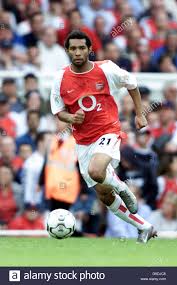 Jermaine Pennant has revealed he was DRUNK when he scored a hat-trick on his first start for Arsenal.

The winger has told how he wasn’t expecting to be in the Gunners’ starting XI for their home game against Southampton on May 7, 2003 – so he went out and got very, very drunk.

And to his surprise, he had the game of his life, helping himself to a hat-trick – a feat matched by Robert Pires – as Arsene Wenger’s team saw off the Saints 6-1.

In his new autobiography, Mental: Bad Behaviour, Ugly Truths and the Beautiful Game , he explains how he joined pals including then Arsenal teammate Ashley Cole at a party hosted by FHM magazine.

He says he “got wasted”, stayed out all night and then “woke up with a McDonald’s breakfast”.

Despite his friends’ threats to lock him in so he could prepare for the game properly, he eventually convinced them to let him tag along, insisting he wouldn’t touch a drop of booze.

He said: “I knew there were going to be so many girls there. I was determined to go. There was no way that I wasn’t going.

“I promised not to drink, not to have a drop. So I went there, it was a good night – and I ended up getting completely wasted! We got so wasted they forgot about my having a game the next day.”

Former Charlton defender Jon Fortune, one of the friends with him on the night in question, recalls how Pennant “was still up with a girl at 5am”.

Writing in the book, Pennant says his “heart dropped” when he found out he was starting.