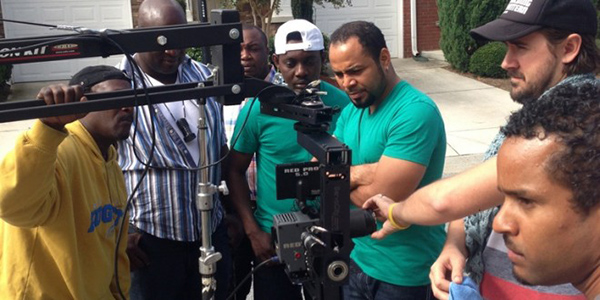 Nigerian comedian, Ayo Makun, aka ‘AY’, has kicked off the shoot of another big budget movie that promises to break a record as always.The new movie titled ‘Yoruba Demons’ is currently shot in Abuja and flaunts some big brands like Arik, Transcorp hilton, as part of its sponsors.

From its title to the quality of its cast that includes Davido ,Falz the Bahd Guy, Ramsey Nouah, Segun Arinze, Ireti Doyle, Jide Kosoko and Francis Duru,Osas Ighodaro, Damilola Adegbite, Odunlade Adekola, Nancy Isime and Lilian Esoro, the movie promises to be a hit.AY’s youngest brother, Yomi Casual is part of the costumier, alongside Abuja based designer Seyi Vodi, women’s wear NHN Couture with House of Tara in charge of set makeup.

The screenplay was written by Anthony Joseph and directed by Toka McBaror, the director of 2017 historical film ‘Kada River’, while AY serves as executive producer.AY, who began his career as a standup comedian in 2004, has produced three movies since 2014 including 30 days in Atlanta, A trip to Jamaica and The Accidental Spy.

In 2017, his movie ’30 days in Atlanta’ was recognised by the Guinness World Records as one of the films with the highest domestic gross in the territories of Bollywood, Nollywood and Hollywood.The film went on to gross 78 million Naira in seven weeks after its premiere and brought in a box office total of over 137 million naira.