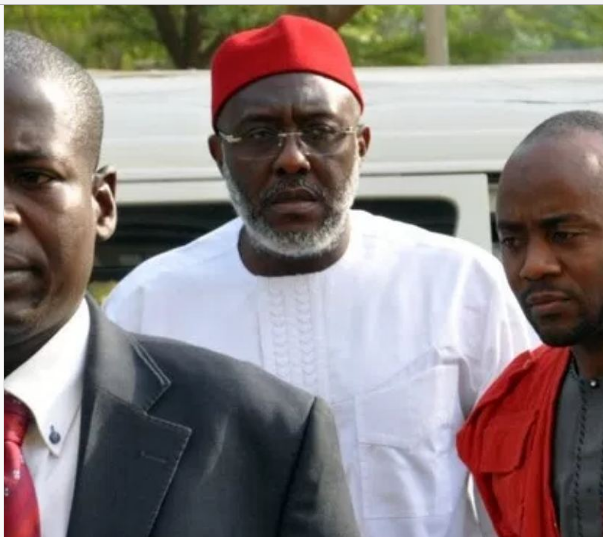 Former National Publicity Secretary of the Peoples Democratic Party, PDP, Chief Olisa Metuh, on Tuesday, narrated before the Federal High Court in Abuja, how he got N400million from ex-President Goodluck Jonathan, before the 2015 presidential election.

Jonathan and Metuh Metuh, who is facing a seven-count money laundering charge the Economic and Financial Crimes Commission, EFCC, preferred against him, said the money was wired into his account, after he exposed some of the challenges that faced Jonathan’s re-election bid. He told the court that Jonathan requested for his account number, after he watched a pesentation on strategies the PDP needed to adopt if it was to neutralize the political influence of the then opposition All Progressives Congress, APC, which had nominated General Muhammadu Buhari as its presidential flag-bearer.

According to Metuh who mounted the witness box to testify in defence of the charge against him, among those that watched the Powerpoint presentation with Jonathan, included the current Vice Presidential candidate of the PDP, Mr. Peter Obi. Others were the then Vice President, Namadi Sambo, then National Chairman of the PDP, Alhaji Adamu Muazu, ex-Cross River State Governor, Mr. Liyel Imoke and a late chieftain of the party, Chief Tony Anenih. He said former President Jonathan was highly impressed with the presentation and assured that the party was in good financial standing to sponsor a favourable media campaign.

“He requested that I should give him account details for him to send money to handle what he called special assignment. He said the success of the assignment would go a long way in determining the survival of our democracy, especially the holding of a peaceful election.

“The President also directed his aides, Reuben Abati, Doyin Okupe and Oronto Douglas, to work directly with me under the supervision of Chief Anenih.

“As we got to the car park, the National Chairman told me that since the President was comfortable with my proposal for the media campaign, he said I should come to his house with my bill, together with the National Financial Secretary.

“He directed the National Financial Secretary to approve my outstanding bills and to keep for emergencies for my media campaign. Subsequently, he approved the program for the party’s media campaign”.

“The President later told me that he had paid N400million to my account and that I should start the assignment immediately.

“I thanked him and I directed Mr. Sam Ben, my Executive Assistant to call my account officer. We asked her whether I had N400m inflow into my account.

“She took a couple of minutes and confirmed the payment of N400m. Consequent upon that, we started the assignment”.

Asked if he was aware of the source of the the N400m, Metuh said: “I know the payment came from the President as a leader of the the party and with assurances of the funds that he personally raised from his friends.

“It is normal that the leader or candidate in an election spends money and contributions that are mostly made directly to him. I had knowledge that the leader of the party informed me that he made the payment of N400m into my account”, Metuh insisted. He said he never knew that the EFCC was investigating him until his statement of account was published in a national daily.

“I became worried so I called my account officer to ask her whether the EFCC is investigating my accounts and why the bank failed to inform me before giving the details of my account to the media.

“She promised to get a copy of the statement to me but it was the same day that I was invited and arrested by EFCC.

“They asked me whether I met with Dasuki, whether I had business with him and the ONSA.” Meanwhile, EFCC, through its lawyer, Mr. Sylvanus Tahir, urged the court to compel Metuh to close his defence. Tahir alleged that Metuh who commenced his defence since July 6, 2018, was deliberately stalling his trial with “irrelevant stories” that has no bearing to the charge against him. Meanwhile, trial Justice Okon Abang has adjourned further hearing on the matter till March 4. Metuh is facing trial alongside his firm, Destra Investment Ltd, for allegedly receiving N400m from the Office of the National Security Adviser, ONSA, prior to the 2015 presidential election, without executing any contract.

EFCC alleged that the fund was electronically wired from an account that ONSA operated with the Central Bank of Nigeria, CBN, to Metuh, via account no. 0040437573, which his firm operated with Diamond Bank Plc. It told the court that the fund which was released to Metuh and his firm by detained former NSA, Col. Sambo Dasuki, retd,‎ ‎was part of about $2.1billion earmarked for the purchase of arms to fight insurgency in the North East.

Besides, the prosecution which had earlier closed its case after it called eight witnesses that testfied before the court, equally alleged that Metuh was involved in an illicit transaction that involved the exchange of $2million. Metuh had at the last adjourned date, alleged that President Buhari was determined to jail him at all cost. He told the court that his trial was a calculated attempt by the ruling APC to silence him from criticizing President Buhari’s dictatorial tendencies.

He told the court that top APC members had prior to the time the EFCC arrested and subsequently charged him for fraud, tried to dissuade him from attacking President Buhari in the media. Metuh told the court that some of the APC members, met him on several occasions in Dubai, Switzerland and Paris to discuss possible roles they could play to strengthen the PDP to wrestle power from President Buhari.

He said the top APC members, who he did not disclose their identities, equally complained of President Buhari’s governance style, saying they had lost confidence in his administration. Metuh said after he refused to soft-pedal on his criticisms, he started receiving warnings to be cautious of possible attack and judicial witch-hunt.

Lockdown Ease: Most Airlines Are Not Ready...