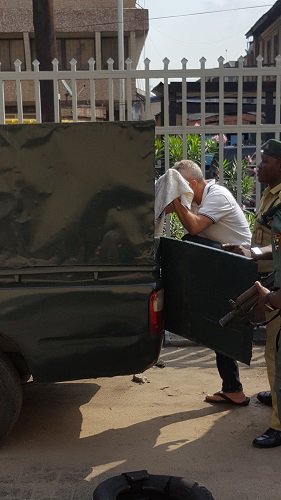 A Lagos High Court in Igbosere on Wednesday authorised Peter Nielsen, the Danish national accused of killing of his wife, Zainab and their three-and-a-half-year-old daughter, Petra, to have his blood analysed for DNA.

Justice Bola Okikiolu-Ighile permitted the sample to be collected by the Lagos State Government following a request by Nielsen’s counsel, Olasupo Shasore (SAN).

Nielsen, 53, was docked by the state on a two-count charge of murder contrary to Section 223 of the Criminal Law of Lagos State, 2015.

According to the state Attorney-General and Commissioner for Justice, Kazeem Adeniji, Nielsen committed the alleged offences on April 5, at the couple’s Banana Island, Lagos home.

Adeniji also told the judge that an interim autopsy has been released, while the full report would be out in four weeks.

Justice Okikiolu-Ighile remanded Nielsen in prison till October 8 when the trial would commence.