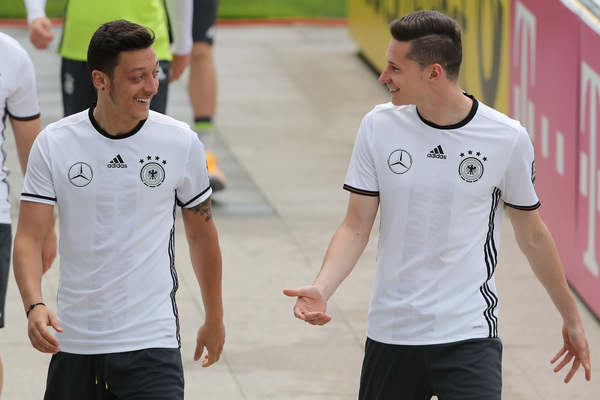 Arsenal midfielder, Ozil has just over a year left on his Arsenal contract, with manager Arsene Wenger saying talks with the 28-year-old were on hold until the summer.

Draxler, who said he turned down a move to the Premier League in favour of PSG in January, says Ozil would “enjoy life” in the French capital.

“I would love to play with him every day,” Draxler told BBC World Service.

“For me, he’s a great player. I enjoy to play with him for every training, every match with the German national team.”

Asked if he thought Ozil would come to Paris, Draxler added: “Yes, I think he’s a great player. He would help every team in the world and I think he would enjoy the life here and even to play for PSG.”

Draxler, 23, said his decision to sign for PSG rather than join a Premier League club in January was not motivated by money.

“You know we have been in talks with some clubs in England as well, but this time I decided to make the decision as to what I feel and what I prefer for myself,” he said.

“There were some teams that wanted me from the Premier League but it was not like it was very, very close.

“Football is about making decisions and that’s what I did. I decided that PSG is the best club for me at the moment.”

Asked whether Liverpool boss Jurgen Klopp had declared an interest, the winger added: “It’s not about Jurgen Klopp, about Liverpool or about different clubs from England.

“It was just my opinion that I am the best player for PSG at the moment – so that’s what I decided.

“I chose a great new step in my career because PSG is a really, really great club . They have big goals, they want to reach big things and that’s why I want to be part of it.

Julian Draxler Begs Fellow German, Mesut Ozil To Join Him At PSG was last modified: May 18th, 2017 by Damilare Salami

Moji Olaiya’s death: ‘We have not informed our father Victor Olaiya’- Family