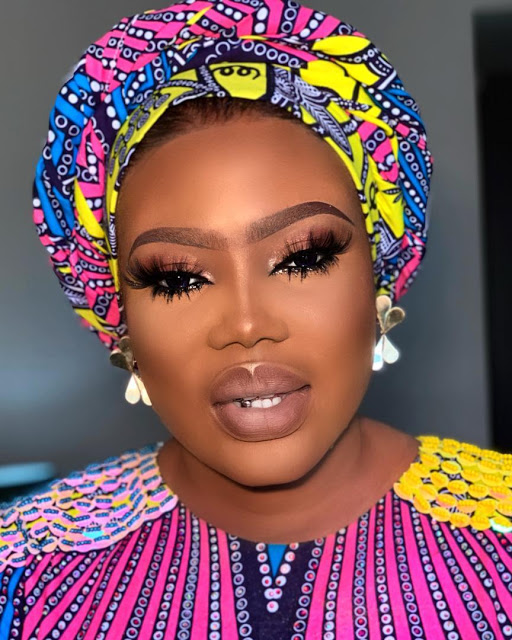 Aramide Adenle is one of the Big Babes rocking lbadan social scene. She is a top designer and a big rice merchant. Everyone calls her Aramite. That is the name of her fashion brand. Aramide Adenle and her siblings recently hosted the after burial party of their late mum in Ibadan where Fuji King, K1 played.

After the party, there was this story that made the rounds that K1 and Aramite are dating and that he might well be the father of her child. K1 has promptly denied the story. Aramide has also denied the rumour. She spoke to City People Online Fashion and Beauty Magazine a few days ago. “It is not true. K1 is not the father of my child”, she said matter of factly.

Months after the after burial party you and your siblings held for your mum , people are still talking about how grand it was. Looking back how did you see the party?

It’s was indeed a wonderful party….I still give all the glory and honor to God ……

Immediately after the party there was this story about how K1 the artist on the bandstand insinuated through his song that he is the father of your child. What really happened?

Alhaji did no such thing ……….I have known Alhaji since I was a little child Alhaji refer to us my self and my sisters as Awon omo mi …..so I still find it very disheartening why people would think I had my child for Alhaji ……….in Yoruba language when u get help from someone and you reply with oshey okomi…that does not mean the person is your husband. When I greet people with omo mi nko does not also mean the child is my biological child hope you get me well?

What is your relationship with K1?

Don’t you think the story went virile because you have refused to reveal the father of your child?

I would say yes…….you know people always want to know everything ….I like everything that has to do with my love life very private and that won’t change

All these rumours is because I am a socialite. It is deliberate to tarnish my image because of the huge success recorded at the party. It is very unfair.

To stop all the shits going around about the paternity of my daughter because of being a socialite….My Daughter’s father Is Canada based business man. He doesn’t live here They just want to force me to reveal his identity and I won’t. He is a very private person.

How did your baby father take the rumour?

But I know all will be fine. He understands me.He knows me well and he knows the truth. It is sad that people will choose to twist and concoct stories to mess up people. Thank God you asked for my own side of the story.

K1 Is Like A Father To Me – Ibadan Big Babe, Aramite Dispels Relationship Rumour was last modified: October 31st, 2019 by Reporter