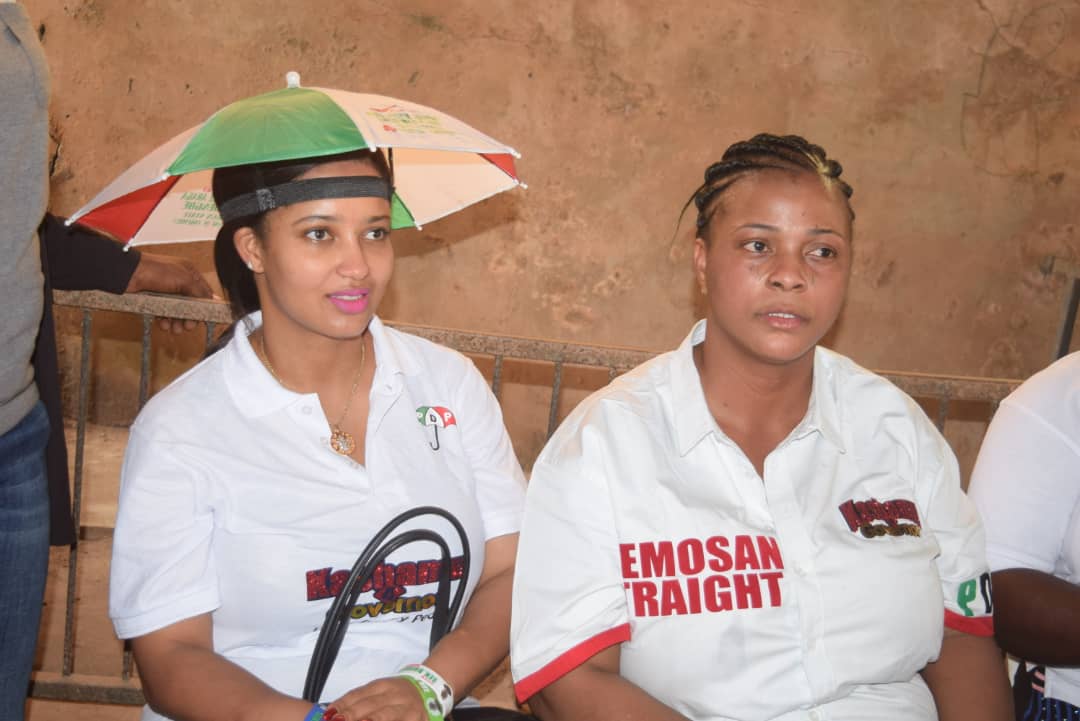 Ahead of the rescheduled elections, Mrs Susan Kashamu, the wife of the Governorship Candidate of the Peoples Democratic Party (PDP), Senator Buruji Kashamu, at the weekend led a team of women and volunteers to campaign at Mowe/Ibafo communities along the Lagos/Ibadan Expressway.

She led the team through the neighbourhoods and markets, interacting with the youths, men and women, and distributing various souvenirs and campaign materials such as umbrella, clothing materials, plastics and exercise books, among others.

Mrs. Kashamu takes campaign for husband and other PDP candidates to Oke-Sopen

Also yesterday, Mrs. Kashamu took her door-to-door campaign to Olowu Quarters, Oke Sopen, in Ijebu North Local Government Area where she enlightened the electorate, especially the women on how to vote on election day.

She distributed various souvenirs and campaign materials to the people.

Mrs Kashamu spoke of her spouse’s plans to provide basic infrastructure for the Ogun communities bordering Lagos such as Isheri-Olofin and Mowe-Ibafo with a view to making it attractive to investors.

While interacting with market women at Ibafo, she said Kashamu’s passion for catering to the needs of the people informed his decision to vie for the governorship.

The wife of the governorship hopeful said her spouse would build a befitting market for the residents of Mowe-Ibafo as well as fix the roads.

Mrs Kashamu added that the lawmaker’s decision not to deduct from council allocations would engender grassroots development.

She said, if elected, Senator Kashamu will promote Micro, Medium, Small Scale Enterprises (MSME) by facilitating the setting up of Micro and Community Banks in various communities and local governments.

The banks, she said, will grant facilities to the people at little or no interest rate.