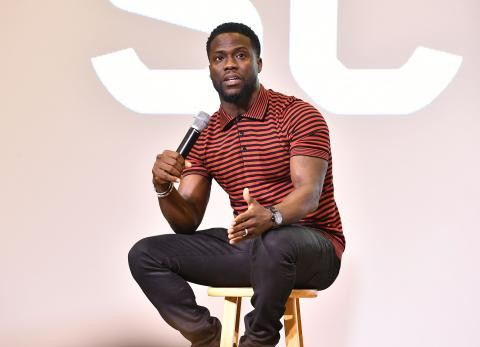 Comedian Kevin Hart has tendered another apology to the LGBTQ community for his decade-old homophobic tweets which made him pull out from hosting the Oscars.

‘I will say this, and I want to make this very clear. And I’m going to say it just in case you guys try to take this sh*t and chop it up, I will rebuttal with this f*cking piece right here,’ Hart said on his SiriusXM show Straight from the Hart. ‘Once again, Kevin Hart apologizes for his remarks that hurt members of the LGBTQ community. I apologize.’

Hart also said during the radio show that there ‘has to be an acceptance for change’.

‘I’m not debating right from wrong. I’ve already stated it’s wrong. But, the other side of it is this. If the fight from the LGBTQ community is equality, that’s the fight. The fight is the will and want for equality. I’m riding with you guys. I understand you,’ Hart said.

‘But in the fight for equality, that means that there has to be an acceptance for change. If you don’t want to accept people for their change, then where are you trying to get to the equal part?’ he added.

Last month, the father of three stepped down from hosting the Oscars after he initially failed to apologize for his homophobic tweets dated from 2009 to 2011.

The apology comes just days after the comedian appeared on Ellen DeGeneres‘s show to speak on the controversy for the first time.

During the interview, DeGeneres revealed to Hart that she has spoken to the Academy and was told that organizers of the Oscars ceremony still want him to host the event.

Hart on his side admitted that his is ‘evaluating’ the idea.

Kevin Hart apologizes again to the LGBTQ community for his homophobic tweets was last modified: January 8th, 2019 by Igbokwe John