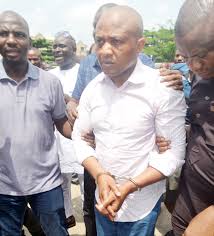 The trial of suspected kidnap kingpin, Chukwudumeme Onwuamadike, alias Evans, and his co-defendants, will on September 13, 2018, resume before Justice Adedayo Akintoye of the Lagos State High Court in Igbosere.

The trial, which last held on June 26, 2018, had been put on hold as a result of the annual vacation of judges.

Judges of the Lagos State High Court proceeded on their annual vacation on July 16. They are scheduled to resume on Tuesday, September 11.

Evans’ trial is expected to resume on Thursday, September 13 before Justice Akintoye. He is facing two separate charges bordering on conspiracy to kidnap, kidnapping and attempted murder.