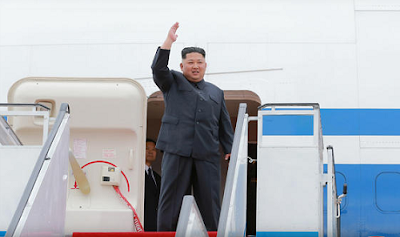 President Trump and North Korea’s Kim Jong Un are both in Singapore for their highly anticipated summit, the first of its kind between a U.S. president and a leader of North Korea. And while officials remain uncertain as to what exactly will come out of Tuesday’s unprecedented discussions, Mr. Trump has stated that he wants to strike a deal to get the Pyongyang to give up its nuclear weapons.

This U.S.-North Korea Summit comes after Kim made history in April by becoming the first North Korean leader to cross into South Korean territory since the Korean War armistice in 1953. This time, much like last, Kim has agreed to a seat at the table, but is reportedly refusing to sit on any of the summit’s public toilets.

South Korean news agency The Chosunilbo reported that when Kim arrived in Singapore on an Air China Boeing 747, he also was accompanied by an IL-76 transport plane carrying food, “his bullet-proof limousine and a portable toilet.”

Kim Jong Un Arrived In Singapore With His Own TOILET was last modified: June 12th, 2018 by Reporter

How Swaga Prepared The Grounds For Tinubu...