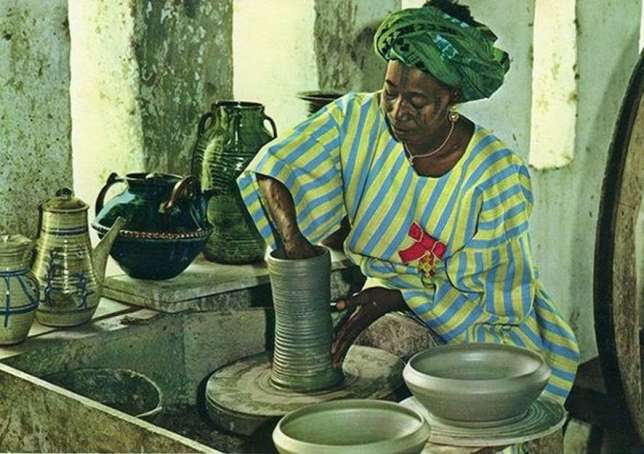 Before the 80s, documentation of legendary Nigerian feminists and the female achievements has a somewhat fleeting representation in Nigerian history.

While she was not the named dignitary on the note and we still await the day heroes of yesteryears like Funmilayo Ransome-Kuti or Moremi or Dora Akunyili grace a Naira note, we should appreciate one who already has.

Dr. Hadiza Ladi Kwali Hajiya at work – the picture that was sketched for her image on the N20 note

Pottery is an African craft that children of the lower middle class to the lower class of Nigerian social class used to dabble in. Equally, it is a craft with deep historical roots across Africa and Asia.

Some people have however become legends over it and secured immortality by leveraging their pottery skills.

Enter, a legendary potter; a woman who became the only female potter on Abuja’s Cardew Pottery Training Centre in 1954; an international grade artisan and 1963 Member of the British Empire; Dr. Hadiza Ladi Kwali Hajiya.

Dr. Ladi Kwali was born in the Gwari region, close to Abuja in Northern Nigeria in 1925 — although debatable; the 1984 Nigerian yearbook suggested that she was born in 1920.

One thing is however clear, her named ‘Ladi’ is significant and meaningful — it roughly translates to ‘Born on a Sunday’.

She was born into a family of potters where women, like in other parts of the country moulded things with their bare hands and she learned pottery as a child.

As she grew, she became an apprentice for her aunt and mastered the pottery technique of ‘coiling and pinching’.

A Purple article about her documents that her masterful pot designs soon marked her out. Reports suggest that as her reputation soared, the Emir of Abuja, Alhaji Suleiman Barau took it upon himself to visit her and admire her handiwork. He was reportedly won over and bought several designs for use and decoration.

Through school, she developed her skill level till she took it up professionally.

Around 1950, Ladi moved to Abuja. It coincided with the visit of Michael Cardew, the legendary British potter to Nigeria around the same time.

It is claimed that Michael Cardew encountered Ladi’s work at the Emir of Abuja’s palace and was so drawn to her work that he chose to stay back in Nigeria to nurture Ladi and propel her into a global phenomenon.

In 1954, Cardew founded the Cardew Pottery Training Centre in Abuja where Ladi became the first woman.

Some reports claim that it was Cardew who convinced her to move to Abuja in 1954, but it conflicts with her timeline. She was likely in Abuja before 1954 because by that time, she must have been 29 and had been on her own for a number of years.

As her reputation soared, so did her skill level and then first, national recognition.

On Independence day, October 1, 1960, her work was on display as one of the select few to mark the craftsmanship fabric in Nigeria.

playLadi at Winchcombe Pottery in 1962

In 1962, she was named a Member of The British Empire (MBE) and she demonstrated at the Winchcombe Pottery, England.

A little later, her works started showing at the Berkeley Galleries, London. While in England, she was also invited to lecture at certain institutions, despite never being formally educated.

After her English sojourn and successful tour, she was so amped up, Purple says that, “she was so excited about her experiences in London that she narrated them to everyone who cared to listen.”

It continues that, “the staff of Cardew Pottery Training Centre in Abuja sarcastically nicknamed her ‘Radio London.’”

In 1977, she was named a honorary doctor at Ahmadu Bello University, Zaria, Kaduna State where she was also a part-time lecturer and demonstrator.

The same year of 1977, the Smithsonian Institute awarded her the Silver Award of Excellence.

The accolades didn’t stop there as she received the Nigerian National Order of Merit Award in 1980 — the apex national honour for academic achievement.

The year 1980 saw her named an Officer of the Order of the Niger.

Despite being married, Ladi died without an issue on August 12, 1984 and with her name permanently etched into immortality as a feminist trailblazer during a time of immense disadvantages.

playA collage of some of Ladi Kwali’s beautiful works

Her major legacy is being a symbol of limitless possibilities despite disadvantages — she was never formally educated. She could neither read nor write English. She couldn’t speak the language either.

Yet, she was celebrated by the culture that owns the language and lectured at their universities. She was a testament of limitation being only a figment of the imagination once one is blessed with a gift one excels at.

In summation of her legacy, she became the first woman on a Naira note — the N20 note.

Her legacy lives on. Till date, her works are being showcased at galleries across the world.

Ladi Kwali – Get to know the first woman on a Naira note was last modified: August 17th, 2018 by Igbokwe John

A Journalist would rather be tortured, jailed or in killed rather than disclose his source – Eedris Abdulkareem