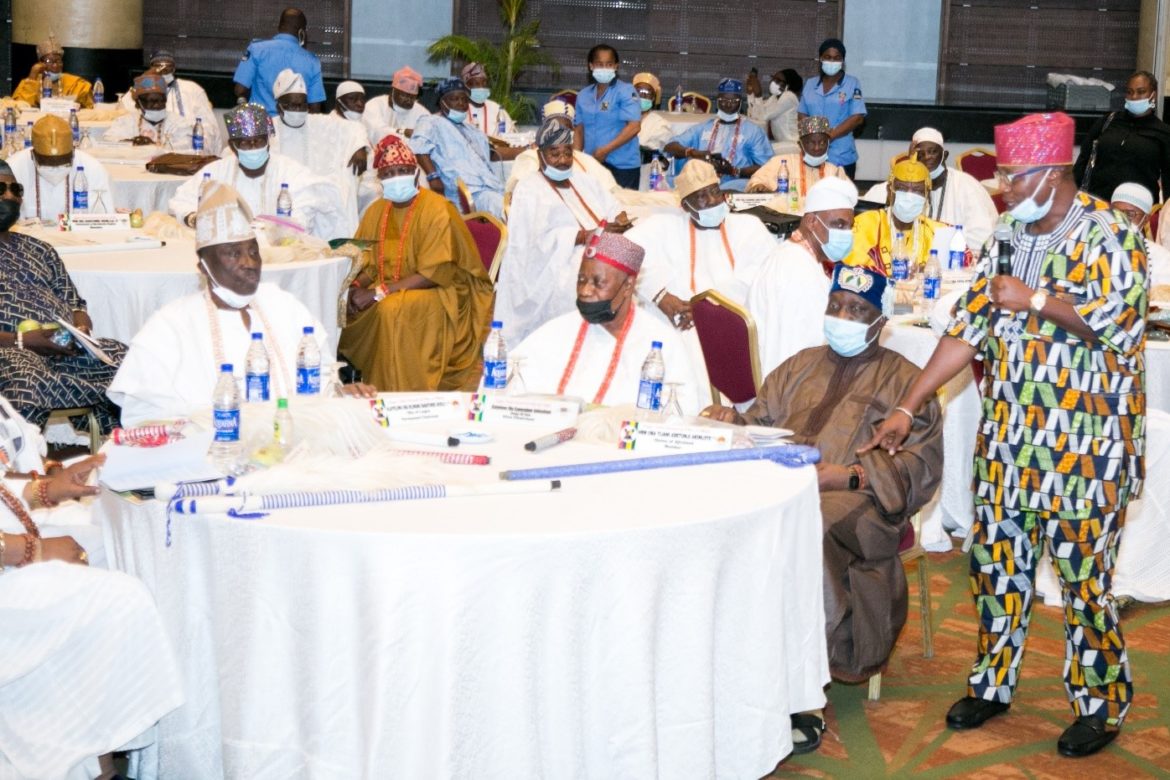 Ahead of the 2023 presidential election, Lagos monarchs have endorsed the National Leader of the All Progressives Congress (APC), Asiwaju Bola Tinubu, as the party’s flagbearer and possible successor to President Muhammadu Buhari after the expiration of his tenure.

The endorsement was done at just concluded 2-day retreat for Obas, organised by the Ministry of Local Government and Community Affairs, held at Eko Hotels and Suites, Victoria Island, with the theme, “The Role of Traditional Rulers in Conflict Resolution and in fostering Communal Peace and Economic Development”.

According to the monarchs, the track record of Tinubu over the years particularly while serving as the governor of the state, turned around the Lagos economy and layed foundation for the state to become the fastest-growing megacity within Africa, is one out of the numerous reasons for his endorsement.

In a voice vote, the traditional rulers assured APC national leader that whenever he is ready to declare his intention publicly, they are willing to give him their full support and ensure that he achieves his goal.

The deliberation for endorsement was reached during the Obas General meeting which was moderated by Olosolo of Isolo, Oba Kabiru Agbabiaka, who also doubles as the secretary for the council of monarchs.

After Oba Agbabiaka raised the deliberation, the entire monarchs used their symbol of offices (Horse-whip) and with a voice vote chorused their readiness and support, as they expect him to vie for the seat.

Speaking on behalf of the Council of Obas and Chiefs, Oba of Lagos, Oba Rilwan Akiolu, commended the State Government for prioritizing the intellectual empowerment of traditional rulers in Lagos State.

Akiolu, who noted that the retreat “The Role of Traditional Rulers in Conflict Resolution and in Fostering Communal Peace and Economic Development”, ​would boost the monarchs’ knowledge, implored other monarchs to continue to commit themselves to Lagos State development.

According to him, “I want to implore you all that you should play your roles in ensuring that communal peace exist in our domains, which engender economic development”.

According to Ahmed, traditional rulers in Lagos had continued to be development catalysts, and respected agents for mobilisation for policy implementation, monitoring, and review of policy options.

The Commissioner said traditional rulers had a special responsibility to uphold not just traditional values, culture, and customs, but to also ensure that information dissemination flowed to all nooks and crannies and that residents in each community understood government policies and programmes in the simplest form, using preferably the indigenous languages.

In addition, the commissioner noted that the retreat would offer the opportunity for purposeful engagement on salient issues and more, and how they could leverage existing peace and stability in the State, to connect higher economic prosperity.

Thanking them for their efforts so far in assisting the government in their domains, Ahmed urged the traditional rulers to continue to cooperate with the government, and to support her effort at moving the State to the next level, in line with Governor Babajide Sanwo-Olu’s promise to the people of the State and for, “A Greater Lagos Dream”.