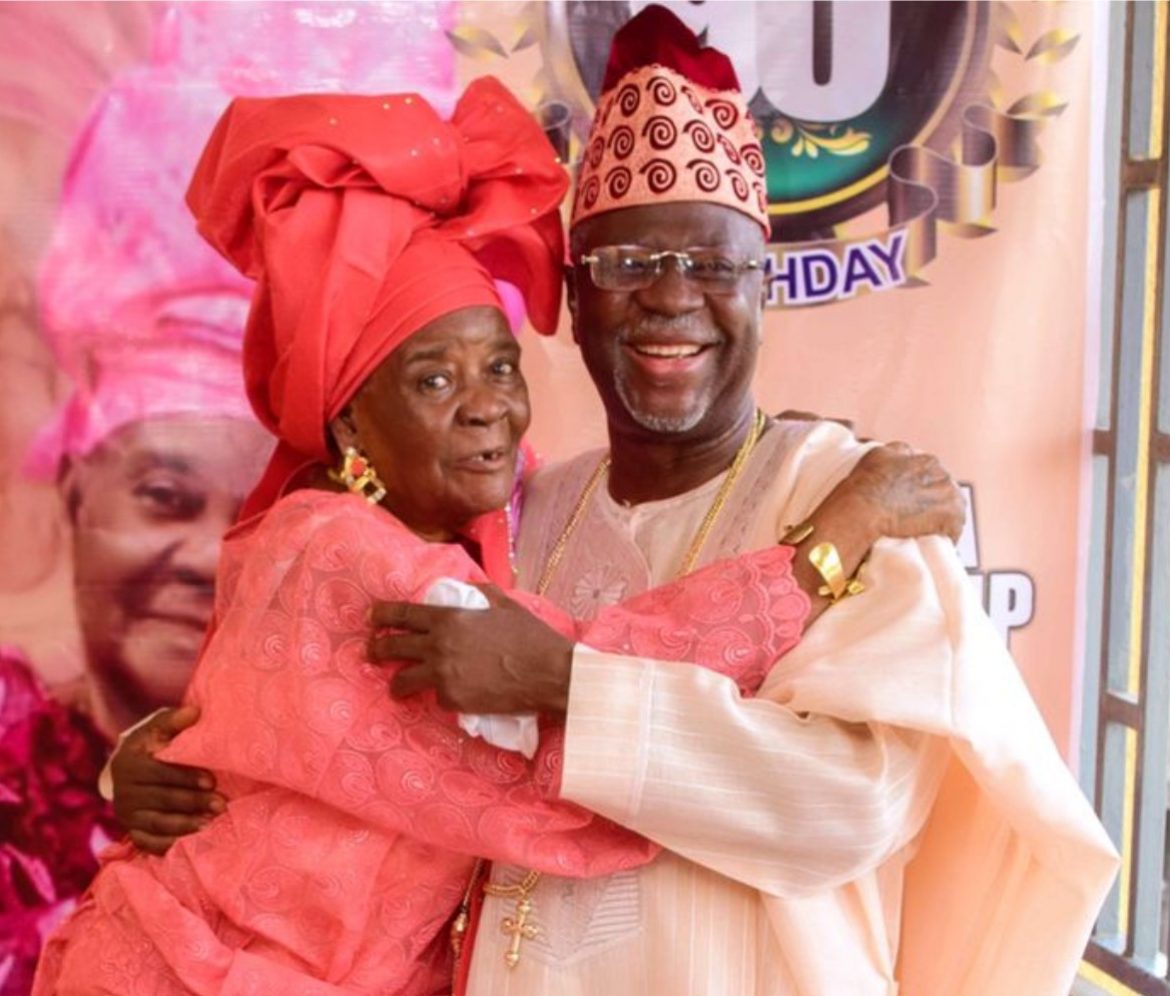 It was a life well spent for late madam Felicia Arike Obasa who passed on at the ripe age of 91 a few weeks back. A grand burial was staged for her by her children led by the first child, Chief Gbenga Obasa along with his siblings all together gave mama a befitting burial. It was a collage of top celebrities who stormed the wake keep, funeral service and grand reception in honour of late Mama Obasa. Chief Gbenga Obasa pulled a big one as many important personalities honoured him by giving his mum a grand burial. The burial rites started with a wake-keep service at Our Saviours Church, Lagos Island while the funeral service took place at The Vestry, Ikoyi Vaults and Gardens followed by a grand reception which was held at The Bell Centre, Lagos Island. On the band to thrill guests was the popular Faith Band while many professional vendors were in charge of the surplus foods and drinks. City People’s Society Editor, TAYO OYEDIJI captured how the party went.

For Mama when she was alive, she enjoyed the fruits of her labour. She was described as a caring and compassionate woman who looked after her children. She was a woman with a large heart who embraced everyone she came across. She was known to be a giver and no wonder, many testified to her generous nature. She died fulfilled shortly after she turned 91.

Mama’s popular son, Chief Gbenga Obasa popularly called Obasky, who is also mama’s first son, was up and about at the event. He was seen mostly around all the tables making sure every guest at the party was well catered for. He was indeed the perfect host who shouldered the big brother mantle for his siblings and made sure everyone was fine. He was seen decked in a beautiful blue colour complete Agbada Aso oke and later changed to a purple outfit for the reception proper. He is well-loved by all and no wonder many celebrities all came out to celebrate with him as he buried his mum.

THE BOND BETWEEN CHIEF OBASA AND HIS MUM

If you are close to Chief Obasa, you will notice he does not joke with his mum. He loved his mum dearly and was always with her most time. Though Chief Obasa was not by her side when she passed on, but he was the last to speak with her before she passed on. And in his amazing tribute, he eulogized his late mum who instilled many life lessons in him. He wrote “Tribute to my Dearest Mother* That you are no longer with us is yet to fully dawn on me. It was indeed a great privilege and honour to have such an alluring, enchanting and assiduous woman as my mother. You woke up early in the morning to pray for me after not sleeping all night due to prayers and praise worships. We talked on the phone daily; We gisted about your joys: past, present, and the future.

Mummy, you were truly One in a million. You were a strong woman, a caring and generous mother. A warm and God-fearing woman. Your caring nature was displayed in the way you would call to check up on us when you had not heard from my siblings or myself in a while. Certainly, I will miss the manner you called to check on me in the morning and at night. You made it a point of duty to call and pray for each and every one of your children every first day of the month. My mother was a very warm, compassionate and vibrant woman, who always went out of her way to help others. You were always willing to give so much of yours to others and I have tried to emulate that act of generosity myself.

Children learn different things, either positive or negative, from their parents. However, the lesson learnt from Mama’s life has been a tremendous blessing for me. My mother impacted my life in such a way that words are inadequate to describe my feelings. Certainly, you cared so much for your children, grandchildren, great-grandchildren and for those who are not yours, especially your tenants. Mother was virtuous, elegant, circumspect, and intelligent. Now that you have transited, rest in paradise, my adorable mother, as you join the band of celestial angels. Enjoy your deserved peace with the Lord, and may your kind-hearted soul continue to rest in the bosom of the Lord Jesus Christ. Sun re O, Mama Gbengus, till we meet again to part no more. Chief (Sir) Gbenga Obasa .JP.

To give Mama a befitting burial were also Chief Gbenga Obasa’s siblings who all supported each other from beginning to the end. They all stood out with their children and made sure the programme went as planned. Mama was survived by many successful children. Mama’s firstborn is Chief Gbenga Obasa, a top Lagos businessman and top socialite, Chief Mrs Funmilayo Daramola Oniru, Mrs Funke Soetan and Dr Segun Obasa. They all looked good for the event.

It will be surprising not to see Eleganza’s boss, Chief Rasak Okoya and his beautiful wife, Shade Okoya at the event because Chief Gbenga Obasa and Alhaji Okoya share a very close relationship. In fact, many people always tag Chief Gbenga Obasa as Alhaji Okoya’s right-hand man and this is also very obvious. They have a business relationship and also storm social events together, they are always like 5 and 6. It was payback time for Chief Obasa as the Okoyas stood solidly behind him, and for many hours, dined and wined before they took their leave. They were seated at the front table with Justice Sola Oguntade who is Alhaji Okoya’s blossom friend.

The OKOYA SIBLINGS NOT LEFT OUT

Alhaji Rasak Okoya has 2 siblings who often attend events together with him. His younger brother, Alhaji Tajudeen Okoya and younger sister, Chief (Mrs) Wosilat Okoya. They were both at the event to honour Chief Gbenga Obasa. They were seen seated with their elder brother, Alhaji Okoya in the front seat. They also had a great time. Alhaji Tajudeen was there with his wife. Chief Mrs Wosilat Okoya looked beautiful in a monochrome, white and black outfit matched with a white headgear and timeless white pearls.

The pretty wife of Eleganza’s boss, Shade Okoya does not carry herself like someone who is arrogant having been married to a billionaire. She is a very down-to-earth lady who loves everyone around her. Hardly will you see her with a straight face, she is always smiling and so respectful of her husband’s friends. She has a very alluring and friendly nature which she also demonstrated at the event. She was seen exchanging pleasantries with all and sundry who came her way and was very magnanimous in doing it. She dazzled in a gold cord lace, gold jewellery, a gold shoe with minimal make-up.

For Prince Bisi Olatilo, society is his life, he is very popular within the social milieu and also very well connected. He pulled a big one at the party as he danced for many minutes when the performing band was introducing him. His dance steps were greatly applauded by all. Give it to the impresario himself, hardly will you see any A-class gathering that Chief Bisi Olatilo does not fit in. He is very relevant. He also shares a very close brotherly friendship with Chief Gbenga Obasa. He was one of the first callers at the event.

Chairman, Doyin Group of companies, Prince Samuel Adedoyin was one of the first set of important dignitaries to storm the grand party. He walked in quietly and also exchanged some pleasantries with other guests. He spent about an hour before he took his leave but a few hours later, his wife, Toyin Adedoyin made her way into the venue and sat at the front row seat with the Okoyas. The couple came indifferently and left differently.

Even if you don’t know who Chief Olu Okeowo is, just mention that the man who owns quite a number of Rolls Royce in Nigeria and his name will pop up. Chief Olu Okeowo is the property merchant who sits atop Gilbraltar Property Company. He also shares a great friendship with Chief Obasa hence his presence. He was not there alone, his wife of many years, Adejoke was with him.

ABOUT THE MAN CALLED OGBURUGBURU

At the mention of his alias, Ogburugburu within the social space, everybody turns around to look out for him, that is the spirit of Ineh Mic Motors chairman, Chief Mike Inegbese. He is a jolly good fellow whom everybody wants to have at their party. He also shares a close friendship with Chief Obasa, and at his arrival, he went straight to sit with his very close pal, Chief Bisi Olatilo. His wife, Mary Inegbese accompanied him to the party. His alias is what many musicians praise him with. He is a man who levels up with many that come his way.

HOW BARRISTER SHADE BALOGUN DAZZLED ALL

If you were at the party, you will not have missed the presence of Lagos Society Woman, Barrister Shade Balogun. The Iyalode of Itori land and Aso Oke merchant was the cynosure of all eyes at the party. She dazzled with everything she wore. From her outfits, her jewellery, which was a statement, her shoes and bag, her physique and carriage, in fact, all eyes were on her. The beautiful woman slayed in a luxury gold french lace and embroidered Aso Oke. She looked very regal and was seen in the midst of her good friends, among whom are the Okoyas, the Okeowos, the Olatilos and some other celebrity women who admire her.

MANY SOCIETY WOMEN IN GOLD OUTFIT

Highly and fully represented were the popular Island Club members. They outdid themselves at the party. They were over 50 in number who all came to honour one of their own. They were conspicuously seen everywhere around the hall. making sure Chief Gbenga Obasa had a hitch-free event. They also did a special performance for him at the reception. Some of those in attendance were: Chairman- Chief Babajide Damazio, Bro. Bolaji Cole- Trustee, Arc. Wunmi Agbaje- Past Chairman, Dr. Yinka Balogun,  Kayode Lawal, Kayode Sogbetun, Tola Animashaun, Joe Igbon, Prince Jare Olateru-Olagbegi, Otunba Gboyega Odunuga, Chief Lekan Smith, Chief Kehinde George-Taylor, Professor Tunde Makanju, Professor Dele Longe, Otunba Kola Adepoju, Alhaji Mabinuori Dawodu.

At the event was Oba Aina Agbolahan Lawal, the Oniru of Iruland. He was at the party to support one of his Chiefs, the Balogun of Iru land, Chief Abayomi Daramola Oniru, who is the husband of one of Mama’s daughters, Chief (Mrs) Funmilayo Daramola Oniru. His entry came with a loud ovation and the Okoyas table was the first he went to before taking his seat.

ABOUT THE 5 STOREY BUILDING ‘THE BELL CENTRE’ USED FOR RECEPTION

One event centre in Lagos Island that is used by top celebrities is The Bell Event Centre. It is a truly hidden gem in Lagos. Located on the pent floor of a 5-storey car park, this event space sits on Campbell Street, Lagos. It is a perfect place to host events. The interiors will wow you at a glance and can sit up to 1000 guests. It was a perfect venue for the Obasas as their guests were all comfortably catered for at the centre.