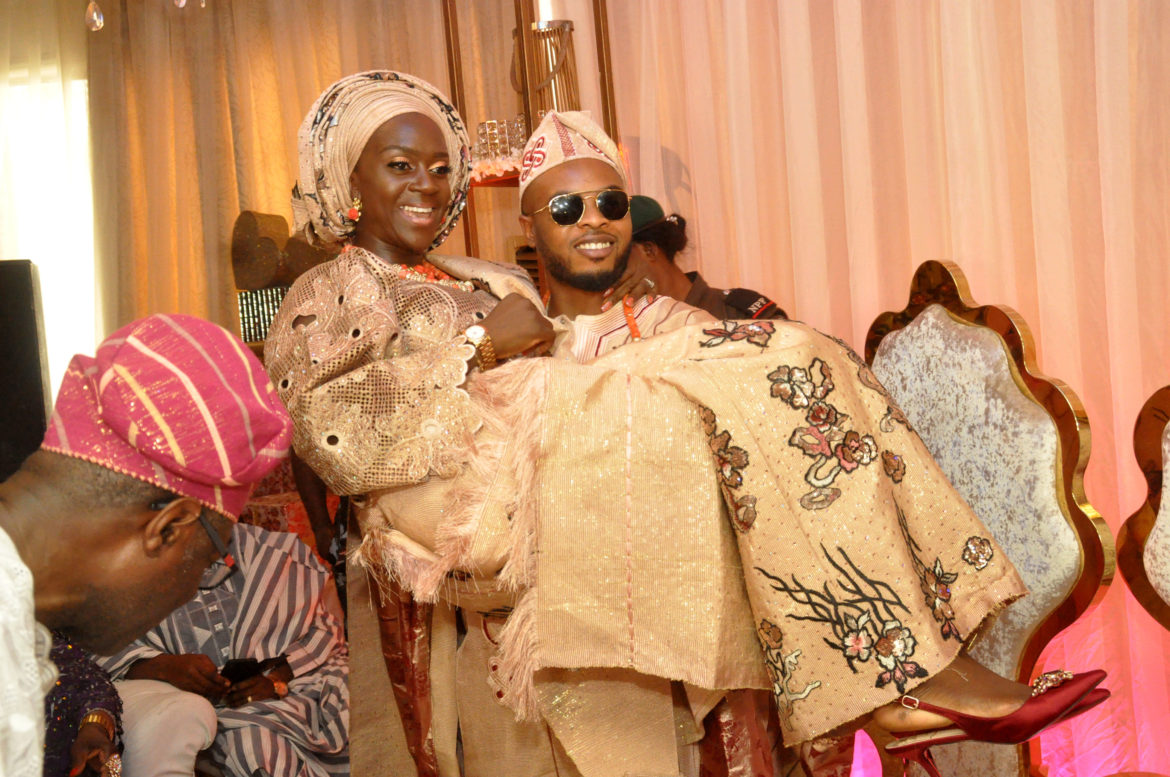 Wednesday, 26th of December, 2018 remains a day to remember for the family of Lagos celebrity woman, Yeyesewa Bewaji Ayomide Aina Julius and the household of late ProfessorGod’s Power Oyewole.

On this occasion of their children’s engagement ceremony. In attendance were important personalities like prominent Lagos politicians and indigenes of Ijebu celebrities. The colourful event took place at De Lagoon Restaurant, Victoria Island, Lagos.

Mrs. Mosunmola Olayide Oyewole is the bride’s mother. She is also a chocolate goddes like her daughter. She rocked the same luxury lace, gele and ipele with the groom’s mother, she was accompanied by her friend and family as she danced and sing to welcome the grooms family. She also wore a matching shoe and purse to compliment her dressing. We can say both mothers have a good fashion sense.

Yeyesewa Bewaji who is better known as Ayo Julius was looking so stunning on her son’s engagement ceremony, she is all shades of gorgeousness, whey you see her at the event, you will be forced to look at her twice or more because of her beautiful attire and a very lovely set of jewelries.

Yeyesewa Bewaji was beautifully dress in a luxury lace. As we all know, Yeyesewa Bewaji, never settles for less. The grey and silver lace she wore made people turn 360 degrees. What about her gele and ipele? It is second to none. You cannot resist the way it dazzled. The purple gele and ipele was embellished with different colours of stones, pearls and other beautiful elements.

The kind of design on her gele and ipele is not the regular one people rock for owambe. Hers was unique and lovely, her style of gele also made her stand out from the crowd, she tied a switch gele and it sure looks good on her: did we talk about her shoe and purse?

Yeyesewa Bewaji is a great lover of fashion and her love for luxury wears can’t be overlooked, her shoe and purse is strictly luxury, it’s decorated with different colours of diamond that called everybody’s attention.

As she was about to enter the hall, the called on friends, family, guest and well wishers to join her on the dance floor, she expressed how honoured she felt and she appreciated God for sparing her life to witness her son’s engagement ceremony, she told us what she said before they left the house, she said if God could keep her to witness a beautiful day like this, she would sing to show appreciation to God, while she was doing that, friends and family joined her and they all sang and danced with so much joy and happiness.

The Alaga Iduro representing the groom led the grooms family in and she stated reasons why the grooms family came, she said they would like to have the beautiful daughter of the late Professor God’s Power Oyewole & Mrs. Mosunmola Oyewole as their wife.

The beautiful bride, Rosemary and the groom Oluwaseun have been together for a while but she mentioned that it is their right to request for hand in marriage, officially, which is the proper thing to do, as we all know that a traditional marriage is very important in Yorubaland.

The groom’s parents then went to seek the consent of the bride’s parent and family, they went with all that is required of them for an engagement ceremony and the Alaga Iduro representing the brides family confirmed that everything was complete.

THE GROOM CAME IN WITHHIS ENTOURAGE

After the dancing and singing by the groom’s mother and bride’s mother, the groom Oluwaseun Olamilekan Talabi came in with his friends, the groom wore a very unique agbada made of aso-oke, The agbada was cream colour mixed with damask and also design with a touch of wine. The groom is very handsome as he wore a luxury shoe and compliment it with a beautiful wristwatch.

After he danced in with his friends, he was introduced by the Alaga to the bride’s family. The Alaga asked them to prostrate in front of the brides family 3 times and the bride’s parent and the family prayed for him. After prostrating, the bride’s parent raised Seun up and he sits between them and hugs them and they took pictures together. The groom’s friend were also very stylish because they wore a uniform white attire and same cap made from Aso-Oke. Not only did they dress well, they also support Seun when he was asked to pay some dues by the Alaga before he could enter.

LAUNCHING OF THE LETTER

The groom’s parent were asked to pray on the letter and before it could be read, Alaga Iduro requested that Ayo Julius should call on ten of her friend to support her in launching the letter. To our surprise, not only 10 of her friends came out to support her, all her friends and family came out to support her the likes of Alhaja Sherifat Olugbode, Alhaja Sherifat Alaga, Mosunmola Kayode (Mosunkay), Gbemisola Otukoyo, Chief Mrs. Tina Ogundoyin, Mrs. Ajimobi, Mrs. Ladejobi, Mrs. Adebisi, Olori Folasade Adams-Oloyede, Alhaja Ayoka-Akinsanya, Funmi Oyeyipo, Alhaja Modupeola Sanni (Shine Shine), Mrs. Adefuye, Mrs. Onakunle, Lateefat Jinod, Yeye Tayo and others.

After the groom had acted according to the instructions given by the Alaga Iduruo, he was asked to sit as he awaited his bride. The beautiful and adorable chocolate goddess Rosemary Olabisi Oluwakemi came in with her entourage, the brides attire was so beautiful and elegant, it is not the regular one you see brides, her gold aso-oke was designed in a unique way.

The way her attire dazzles, you will be left with no other option but to concentrate on her, her attire, right from her gele to her buba which was made from a luxury lace to her set of jewelries made from beads and gold to her hand fan and shoe all speaks of luxury.

Let us talk about her beautiful aso-ebi ladies, they all wore a very lovely lace attire, the colour is cream and gold which complement the bride’s attire.

The DJ led the bride in with romantic songs then switched to a danceable song as she was accompanied by her friends.

Give it all to the Faith Band, their performance was a good one, they anchored the groom entrance and Madam Kofo later handed over to them during the reception and they made sure everyone at the event enjoys every bit of it.

This beautiful never aging beauty queen, Tina Ogundoyin is a very close friend of Ayo Julius and she came to support her friend on her son’s engagement. They have been friends for over two decades and they have always maintained a good relationship.

Chief Mrs. Tina Ogundoyin is a very stylish woman with a beautiful xxxx and a lovelybody figure, you will argue her age when you meet her for the first time. She is a grandmother but she doesn’t look like one because she takes good care of her skin and body so well.

You can also call her a fashionista because she also wears designers clothes and shoes, check out her luxury lace and a very beautiful set of jewelries she wore for her friend son’s engagement ceremony.

As we all know that Ayo Julius and the bride’s mother, Mosunmola, never settle for less, they had 4 popular Alaga’s for their children’s engagement ceremony. The popular Alaga Iyawo on Instagram, Mrs. Bisola Bamidele who is also known as Lady Bisbam, has been in the Alaga business for 25 years and she is doing so well at it. She is a professional in the game such that everybody would want to have her as their Alaga. Her performance was great. Let us also add that she is a lover of fashion because she has her own signature gele. We also have Idowu Asibeu who is known as (Alaga Okunrin) at the event, he is also a very good Alaga that performed well at the event.

Another Alaga we should mention is Monisola Obanishola, she is so versatile and she has been an Alaga for over 10 years, she is well known as Mophat Engagement Consultant.

IS THE MC FOR RECEPTION