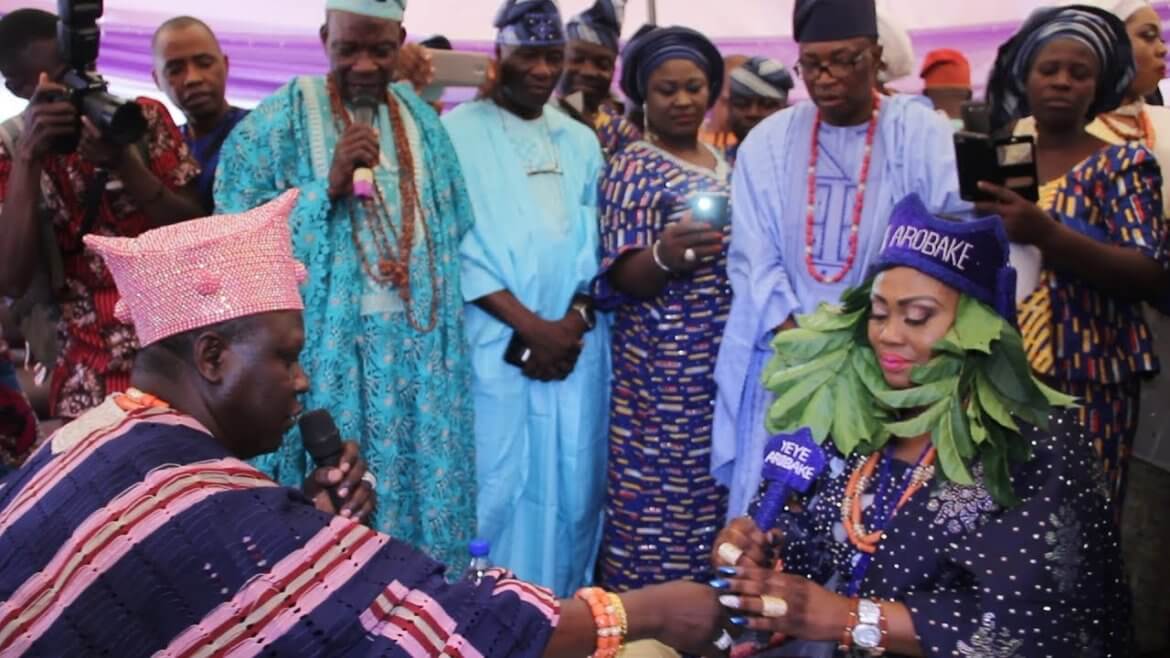 •Becomes Yeye AROBAKE Of IBALAND In OSUN State
The sleepy town of Ibaland in Osun State came alive on Friday 22nd December, 2017 when the Eburu of Iba, Prof. Adekunle Adeogun Okunoye, honoured popular Lagos society woman, Yeye Adejoke Moyosade Ojo with the Yeye Arobake of Ibaland title. She, her family members and friends stormed the town in large numbers from all parts of the country to honour her.

Other guests include Hon. Akani Olorunwa of the Osun House of Assembly; the DPO of Ikotun, Tarzan Tsav, Mrs. Bolanle Owolabi, Head of Human Resource Dept at LASRRA; Chief Yemi Oke, the CEO of Precious Paints in Lagos and Chief Banji Ojo, Perm. Sec. in Ekiti State. Yeye Ojo’s immediate younger sister Dolapo Badmus (who is the PPRO of Zone 2) was there. So also Eng. Tunde Laja who flew in from the UK. There was also Toyin Bamisale Oni of LTV 8.

Many alumni of the Oyo State College of Education, Ila Orangun came in huge number since both Kabiyeesi and the lady of the day (Yeye Ojo) are alumnus of the school.

Who did what at the party? We can tell you that for free. Mrs. Folasade Dada, the owner of Development Facilitator supplied Excellence Ankara. Mrs. Iyabo Ninalowo of Culture Speaks at 120 Bode Thomas also supported Yeye Ojo.

Her nails were done by Fantastic Nails and Makeover was handled by Teelook Makeover run by Taiwo Kalukuola.
The Fila Oye was handled by Asindemade Royal Company also known as Asindemade Ooni. They produced all the paraphendia of office. The Ileke (Beads) was done by Funmi Beads at Balogun in Lagos.

There was disco on Friday night at Ideal Nest Hotel in Osogbo. Catering was handled by Oreoluwa Catering Services and drinks was by Olapade Cooling Solution in Osogbo.

The new Yeye Arobake dazzled everyone at the event that day as she looked sweet in her ensemble from head to toe. Many noticed her lovely Palmeri Shoes from Naples in Italy. The King of Ibaland decided to honour Yeye Adejoke Moyosade Ojo because of her selfless service to humanity. They were schoolmate at Oyo State College of Education, Ila Orangun in those good old days. That was why a lot of their classmates stormed the event. It was a reunion of sorts.