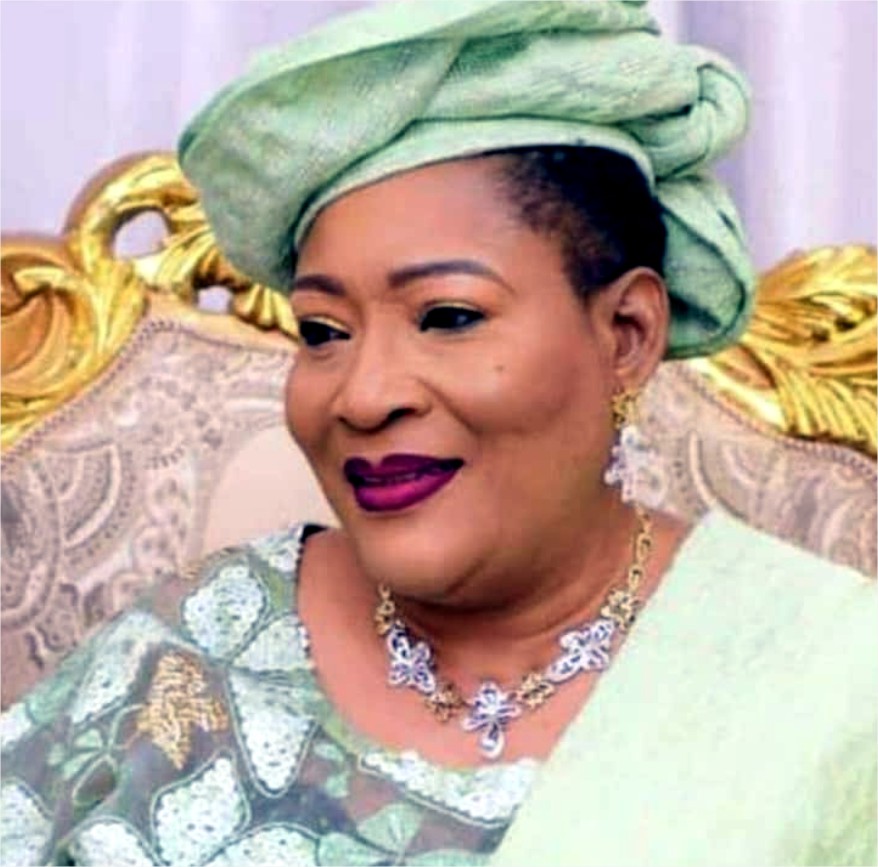 •Why Many LAGOS Society Women Will Miss Her

It was, indeed, a black Sunday in Lagos as the popular Nelson family and the Lagos social scene were thrown into mourning, when one of their own Chief (Mrs) Kemi Nelson, a popular APC politician in Lagos finally bowed to death. The astute politician bid the earth farewell on July 17th, 2022 in Lagos, 5 months after her 66th birthday. Before her death, she was a very reputable and distinguished female member of the ruling party in the country, APC.

The unassuming and pretty woman lived a bubbling life until she died after a prolonged illness. She was said to have been in and out of the hospital shortly after she celebrated her 64th birthday in the year 2020.

For Chief Kemi Nelson, her birthdays were special and highly valued, but in the last 3 years, she has opted for very low-keyed parties. Two years ago, she marked her 64th birthday with a quiet ceremony at the Archbishop Vining Memorial Church, GRA, Ikeja, Lagos, with family, friends and political associates. A reception at her home was attended by many dignitaries. Her 65th birthday, last year also followed the same pattern.

The day started with a session of praise, worship and thanksgiving at her home in Ikeja, Lagos. But this year, the ceremony took a different turn as she held a thanksgiving service to celebrate her recovery from an ailment. Some said her illness was brief, while others disclosed that it was a terminal ailment that she had been battling for a while.

Chief (Mrs) Kemi Nelson had a beautiful life when she was alive and lived it in full. She was not a person who was readily down with illness, but the last illness took everyone by surprise.

With many feathers to her cap, Mrs Nelson was one of the society matriarchs, who dominated the social scene and political sector for many years. She is a lover of people and people always swarmed around her. The entire society space will miss her, especially her children, husband and her elder sister, Chief (Mrs) Kofo Olugbesan, who is a top society woman and top immigration ex-boss. She was one of the rich celebrities in Nigeria who make parties tick. She never announces it but her large heart was often felt in her philanthropic nature and how she had always been used as an instrument to help people who came across her path.

She has been a recurrent decimal at parties for many years where she dazzled with her friends. She was always seen with her close friends from different divides, both old and young. She was always full of smiles and there was never a dull moment with her. She loved to dance and this is a part of her that people will miss at parties.

This woman, who has marched where men fear to walk, has done so well for herself in her 66 years on earth. Recall that her elder sister, Ms Biodun Laja, the founder of Lekki British School, died 3 years ago at age 69. They were all born into the Illustrious Laja family from Ijebu.

Chief (Mrs) Kemi Nelson lived a fulfilled life, no doubt, and this can be tested by her many achievements. The bold, fearless and courageous woman was the former South-West Women Leader of the All Progressives Congress (APC) and she carried out her tasks with so much ease, enthusiasm and effectiveness to the admiration of everyone.

Call her one of the Amazons and style matriarchs of our time and you won’t be wrong, Chief (Mrs.) Kemi Nelson positioned herself as one of the dogged politicians around, especially in Lagos State within a terrain that is visibly dominated by men. The former Lagos Commissioner for Women Affairs and Poverty Alleviation cut the picture of a man in a woman’s body because she had proved beyond reasonable doubt that she had all it takes to make her mark on the political terrain where she had found herself. The beautiful woman whose major reason for going into politics was to render service to people would be sorely missed by many society women and members of the APC. After her passing on, her Lekki home has been a Mecca of sort for many sympathizers, especially her friends.

The woman who lived an exemplary life has been described as a woman with a large heart, who never hid her passion for a better Lagos and Nigeria through democratic governance. She was diligent and excelled in every position or committee she found herself in.

The presidential candidate of the APC, Bola Ahmed Tinubu, was an early caller at her house and he expressed sadness over the passing on of Chief (Mrs) Kemi Nelson, In his statement, Tinubu, who described Nelson as a good woman, stated: “I was shocked and saddened by the sudden passing on of an activist, prominent politician and one of my closest associates, Yeye Kemi Nelson” we shall never forget Yeye Nelson. For her past sacrifices for Lagos and, indeed, Nigeria, she will be remembered for her commitment to the womenfolk and the downtrodden, she will be celebrated.”

Also, the Speaker of the Lagos State House of Assembly, Mudashiru Obasa, in a statement, described the death of the politician as a huge loss to the State, the party she served with so much passion, members of the party and Nigeria. ”The shock is indescribable. It is so huge and painful. Indeed, we lost a very bright light that had always brought the desired radiance to our party,” he said. In the same vein, the APC Lagos West Senatorial District candidate, Dr Idiat Oluranti Adebule, has described the death of Nelson as shocking and sad.

According to her, “Yeye Sewa’s death came at a time the party needed her most in galvanising support for the party through the mobilisation of women across the country.”We’ll miss her contributions to the growth and development of our great party. She was a dedicated politician and a remarkable woman. She advocated and encouraged women’s participation in politics with great passion,” Adebule said. At 66, Yeye Sewa of Lagos would be remembered for her good deeds. Until she passed on, the Yeye Sewa of Lagos proved her mettle, she was indeed, glowing beauty and always scored high in the fashion sector.

She never slowed down within the social milieu and her signature outfits, mostly her headgear were her staying power. She always dazzled in expensive, but simple fabrics.

Apart from her beauty, many women respect her, especially in the party. She was a lover of the masses, she served as a mentor to many and her hands were always widely spread to embrace people. Anytime she stepped into a party or any gathering, there was always a loud ovation from people, hailing her by shouting “woman leader”.

Her foray into politics started in 1992 as a member of the National Republican Convention (NRC) and that was during IBB’s 2-party system. She was also the party’s flag bearer for Lagos West senatorial election in 1992 and that was when politics for her really started. She went to Anglican Girls Grammar School, Ijebu-Ode and thereafter, she started her career as a teaching assistant at Corona School, Apapa and from there, she went to University Teaching Hospital (UCH) Ibadan where she trained as a Professional Nurse and Midwife. After she finished at Ibadan, she came to Lagos to work as the Medical Representative for the Lagos zone of Beecham Nig Ltd, shortly after then, she was also doing business on Allen Avenue. Later, she did an Executive MBA Programme and a Diploma in Law at Lagos State University.

During her early political era, she was the Flagbearer for Lagos West Senatorial District and at a time, the Chairman of NRC’s Electoral Committee for the presidential primaries in Osun State. At the dissolution of the two parties, she joined the United Nigerian Peoples Congress (UNCP) and contested for a House of Representatives seat in the Ikeja Federal Constituency and won. She later joined the Alliance for Democracy as the dominant party in Lagos and made it to the cabinet of Governor Bola Tinubu as Commissioner for Establishment, Training and Job Creation and later Women Affairs and Poverty Alleviation. She was until her death the only female member of the Lagos State Governor’s Advisory Council.

As the former woman leader in her party, a feat which is not for the faint-hearted, she endeared herself to many of the followers and members of the party. Highly influential, academically and politically sound, Kemi Nelson became one of the front runners and mentors for many women who have embraced politics and confidently put her home front in order. Her husband, who is one of the worst hits, was her backbone and she enjoyed the tremendous support he had given her over the years.

Her 41 years of marriage to her longtime husband, friend and confidant, Adeyemi Nelson, remains unshakable and their love story dated back many years ago when they met at high school. After her husband’s educational sojourn in the United States of America, they got married in 1981. Her husband was a retired Director of the Federal Ministry of Internal Affairs in 1987. They had 3 children.

The Yeyesewa of Lagos, Chief (Mrs) Kemi Nelson, has conquered her world. She has left her legacy on the sands of time as a truly dogged politician whose political clout can not be de-emphasized within her party. She was an amiable woman you would have loved to meet but death has dealt a deadly blow.

How Gov. ABIODUN Got Many OGUN APC Leaders Angry

Why I Am Running For Ogun Governorship–...