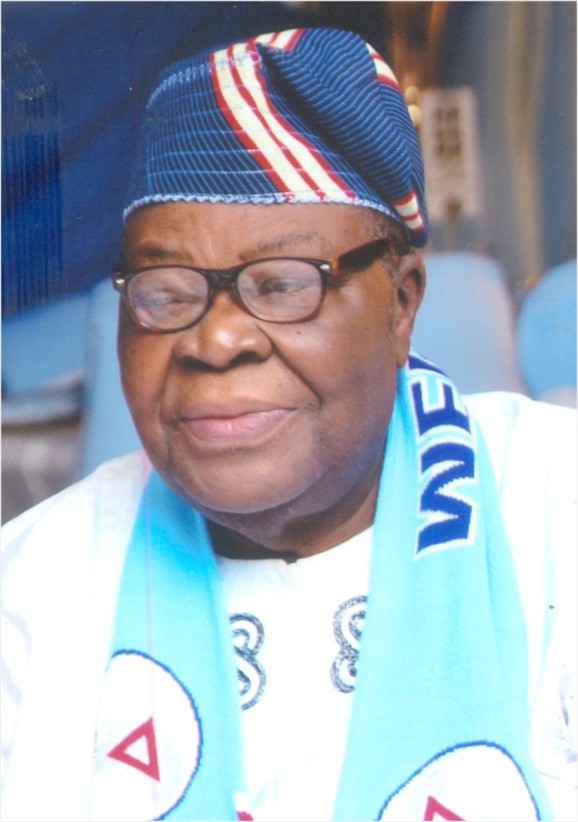 •What He Told City People About His Life @ 81

Popular Lagos socialite, Prince Jide Oshunubi is dead. He died at the age of 81. He wanted to celebrate 81 last March, but he couldn’t celebrate it big because of Covid-19 lockdown. He only took Holy Communion and he cut his birthday cake among friends, family and close associates. He had planned a big party before, to hold at his church in Ketu area of Lagos. He was to have had a Thanksgiving and a Reception inside the church hall. But he had to cancel all that. He celebrated it at home. If you met popular Lagos socialite, Otunba Jide Oshunubi (Sokoyokoto) before his death, you would not know he was 81. He looked good for someone who is an Octogenarian.

This late King of Boys and one of the most popular Lagos socialites, rocking Lagos social scene, was well loved within the Lagos social establishment. He was a happy go-lucky man, who is happy for everybody. He always joins hundreds of celebrities in celebrating their events. This is also because he had become a big brand on the Lagos social scene. He has been a constant star on the party scene, from the early 80s uptill his demise. Not only did he get invited to all the big parties in town, he injected life into any party he attended. By nature, he is ebullient and full of life. He was one person you need to energise any owambe party. He was always happy and ready to celebrate with others. He loved to dance. He was a good dancer. Everyone called him by his nickname, Sokoyokoto.

So, socially active was Prince Jide Oshunubi that he sang and he was composed hit tracks for the likes of King Sunny Ade (KSA) and Ebenezer Obey, in those good old days. He had  always been close to the 2 music icons and he was always  willing to support their music.

By training, he studied Engineering and specialises in Refrigeration & AC  manufacturing and repairs.

At 81, what had changed about Prince Jide Oshunubi ? What did not change? City People asked him months back at his Ketu, Lagos home. Expectedly, Age mellowed him a bit. So, he couldn’t attend every major party as he used to. He was  also managing his knees. He has had to do knee surgery. He was on the big side, so his weight rested on his legs.

Despite all these, Prince Jide Oshunubi  was still his bubbly self, still always cracking jokes.

Naturally, he is a witty person. He is still as witty as ever. The loss of his wife, a few years ago, also affected him a bit. But he says he won’t remarry.

How does he feel at 81? “I thank the Almighty God who spared my life despite all the turbulence I went through. I am grateful to Almighty. I will always be singing his praise, worshipping him all the time because he is a great God. The reason I need to keep praising him is because a lot of people have gone. So many of my age mates have gone. I can remember some of my friends who joined me in celebrating my 70th birthday are no more.

They have gone. People like Tanfia Ni. They have gone. People like Gani Oladiran. I can go on. I can keep mentioning others. There are so many, so many. So, I look at myself and how I have survived many travails, illnesses. Each time I fall ill, I always say to God: Am I going to survive this sickness? And no matter what, I have been surviving it. Glory be to God all the time. I have been surviving it. That is one of the aspect I always cherish, each time I think about all that happens to me and all the medical turbulence I am going through, I always say, well, I thank God. Some people can’t even afford to pay hospital bills not to talk of getting healed. But it is only Jesus that heals, Doctors only try. So I thank God for healing me.”

“If somebody or an Astrologer had told me that I will be 80 years old I will say it is not possible, because I lost my mother on the 3rd day after I was born. My mother died 3rd day and I stayed with family members all around.” Where was he born? “I was born in Lagos. I was born and bred in Lagos. This made me to know a lot about Lagos. I have Colleagues that we grew up together from Epetedo, Lafiaji, Obalende, and all. Only few of them are still remaining. Not quite long, I lost one of them who is my friend. It was painful. Still, I say thank God that I will be celebrating my 80th birthday”.

“In comparison with what I did when I was 70 when I used Waterparks, the people that stood by me at that time may God continue to help them. These are people like Otunba Chief (Dr.) Mike Adenuga, Otunba Alao Akala (former Oyo State governor), Otunba Gbenga Daniel (former Ogun State governor), people like Chief Dr. Mike Inegbese, people like Oba Dr. Dapo Tejuoso, people like Alao Azeez Arisekola who came with a powerful team all the way from Ibadan. So many people came. It was star-studded. Well, that chance is not there now. I cannot even connect my family member, Otunba Dr. Mike Adenuga. We are related. He is from Ijebu-Igbo. I am from Ijebu-Igbo. The mother is from Ijebu-Igbo from the same compound called Agbole Olowu Oke Sopen. I am Oshunubi . Mike Adenuga’s mother is like a sister to my dad. My dad stayed at Ibadan. Commissioner Yomi Onasile is my cousin. He is a retired Senior Police Offer.”

“He is Commissioner Yomi Onasile. So, automatically not having money has made me to slow down how I will celebrate my birthday. All the money I have, I am spending it on my sickness. To be old is money. I always advice all those who are alive, the young ones that it is not now that you need money, it is when you are getting old because anything can just crop up.

The other time, when I did my 70th, well over 700 people came. But now, I don’t need more than 200 people, quality guests, because I cannot get all those people who stood by me.”

He is  a man of the world. He has seen it all. What are the lessons he has learnt in the last 80 years that he will like to share with his contemporaries and even the younger ones coming behind?

“I have learnt to be good to people. I have learnt to be a Giver. I cannot do without Giving out. From the little I have, I give. My father had a popular name, in his lifetime. He was called Ani hun, a le jo, yio je. Somebody that always has something visitors will eat whenever they get to his house. So, if you are a young man, take your time. Don’t join any bad gang. Don’t get into the race that I want to be wealthy in a hurry. It will lead you to prison. I am an Engineer by Profession. I am trained in Airconditioning. I studied Refrigeration and Air conditioning. I was trained by UAC. At that time, during the Wharf Problem, there was a time when they had congestion at the ports and Benjamin Adekunle was asked to clear the problem. Somebody brought AC to me and said do you want and I asked him: what should I do with this? He said you can be selling AC’s and be giving us money. I said No, I don’t want to. It was a Taxi driver who brought them to me. I told him, I don’t want to go to jail. I don’t want to end up in Broad Street prison. I know where I come from. I am from Ijebu Igbo. Where I come from, if you don’t have a good name you can’t walk on the streets. You will have to be going to your home town in the night because of a bad name or you don’t go at all.

I thank God. I have a good name. I am living in my house in Lagos. I have my house in my home town. It is enough for me. That is why I always advice people, Work Hard. And Save. You may think you are strong today. How about tomorrow? If you think because you are doing well today and money is coming in, it can stop. I have lost job for good 3 years, when we didn’t get jobs at all, I had to be going to Burutu at that time. We always go by Canoe or Ship to go and be doing any job there, to go for another training, contrary to air-conditioning job. From there, I went to Abuja to go and try my luck because I didn’t allow anything to discourage me. So, I always tell the young ones, work hard. Keep your name. There is no where, you mention Jide Oshunubi  that they will tell you negative things about me. All they will say about me is that: he can talk. Yes. I can talk. I am a mobiliser. They will tell you he is Ebenezer Obey’s friend. Yes. I am Obey’s friend. They will say he likes Ebenezer Obey. He likes King Sunny Ade. He likes the good life. Yes. I do. I like the good life. All work and no play makes Jack a dull boy. I have used that social life to gain something. It is some of these socialites I always go to when I am in difficulty. Some of them answer. Some will not answer. But its my destiny. If God has made your destiny to be such that you will have a helper or that he will send a helper to you, you will have one.

THE LION AND THE JEWEL: LIVE THEATRE LAGOS RETELLS A CLASSIC TO PUBLIC DELIGHT