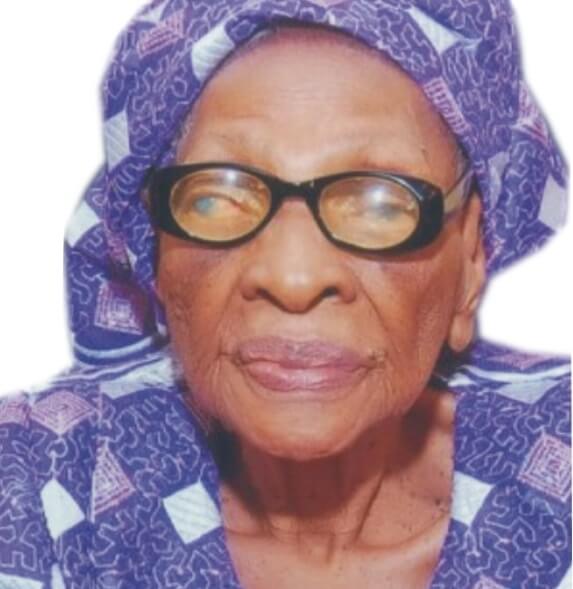 A few days ago, the remains of late Chief Mrs. Esther Omoboade Olukotun was laid to rest at Arigbajo, Ewekoro LG in Ogun State. In her lifetime, Mama Olukotun (nee Sorunke) was the Iyalode of Saint Micheal African Church, Apata Ganga, in Ibadan. She slept in the lord on Wednesday 14th March, 2018.

Chief Mrs Esther Omoboade Olukotun was born on the 10th of October 1916 at Arigbadjo in the present Ewekoro Local Government Area of Ogun State to the families of Pa. James Soboyede Adejoju Sorunke and Mrs Juliana Egbewunmi Aduke Sorunke (nee Obadina). Her father was a descendant of the Akogun Compound (Kingmaker) Owu, while her mother was from Igbore, all in Abeokuta, Ogun State. She was the first of 6 children of her parent.

The bond that existed between Mama and her siblings has really bonded the families together till date.

Late Mama Esther Omoboade Olukotun started her education at Arigbajo and was later taken to Lagos with the help of her late uncle Pa. Samuel O. B. Obadina (Baba Ifo and Cocoa Magnate) with Rev. Aiyedun the then Reverend in charge of Holy Trinity Ebute Ero, Lagos where she continued her education. She also went to Central School Cathedral of St. Peters in Lagos and the following were some of her class mates-Liadi Gaji, Abimbola Daudu, Sule Gbadamosi, Ayinke Sokunbi, Apinke Shaw, Ayo Roberts, Iyabo Jibowu. Mama recalled she was tutored in the Central School by one Mr Adekoya among several teachers.

She was taken back to Abeokuta after her schooling in Lagos to learn sewing, knitting and catering from Mr Cole. She excelled in sewing unique styles for several ladies in the locality and suburbs. Importantly she received guardianship encouragement and support from her uncle Pa Gabriel Oniwinde, popularly called Baba Moleye of 37 Moleye Street Alagomeji, Yaba.

In 1938 she was bethrothed to Pa. Johnson Odeleye Olukotun by her late Aunt, ChiefMrs Adewola Akinwunmi Aikulola Nee Sorunke (Mama Jambu). Consequently she relocated with her husband to Jos. Due to her husband’s job with Post and Telegraph Department; she had the privileged to travel to different parts of Western and Northern regions in Nigeria. In 1959, they transferred from Oshogbo to Ibadan and in 1962 her husband retired and settled in Apata Ganga, where she resided till her death.

Mama’s life in Apata Ganga has been filled with Joy, favour, mercy and grace of God. She continued her seamstress job and also supplied Garri and Elubo to African Church Grammar School, Apata Ibadan, with Mrs Amoke Obadina (Iya Ibeji). She is a staunch member of St. Michel African Church and belongs to Egbe Ife Loju. As a result of her fervent contribution to the welfare of the church, she was conferred with the chieftaincy title of IYALODE of St Michael African Church Apata Ganga, Ibadan.

Mama Ibadan as she was popularly called remains a treasured mother, generous to the core and a blessed woman. An ardent Christian who kept the faith and the word (Joshua 1: 180). She was a song writer and singer. Mama was an embodiment of grace. She was blessed with 6 children, grandchildren, great grandchildren who loved her greatly. A FANTASTIC MATRIACH!!!

TRIBUTE
Glory!!! to our Almighty God who gave our mother such a wonderful long and healthy life up to the highly matured age of over 102years. She was the first daughter and first child of my Uncle, Papa James Soboyede Sorunke and Mama Julianah Egbewunmi Sorunke (Nee Obadina). She was born on the 10th of October 1916 at Arigbajo. She completed her primary education and lived with Revd and Mrs. Aiyedun at St. Paul’s Anglican Church Igbore (now, the Cathedral)
Vicarage where she learnt sewing which became her primary profession even when she got married to Papa Olukotun of Blessed Memory.

Mama Omoboade was very hard working and contributed in no small measure to helping her husband
to take care of the children particularly when she was following her husband from city to city as civil servant in the defunct Post and Telegraph Department. Along with her primary profession she was proficient in gari and lafu (Cassava Flour) making. She was a supplier of these two products to African Church Grammar School, Apata Ganga Ibadan.
Her contributions and activities within the family can not be quantified. My greatest joy in her life is that at 101 she still remembered a lot of things whenever questions were thrown to her. Her Christian life which earned her the Iyalode of African Church, St. Michael Parish Apata, Ibadan was exemplary. –Obafemi sorunke On behalf of, The Sorunke Family.

Tribute To My Mother
Roll the drums, sound the trumpets, pop the champagne, let’s celebrate, lets toast to the life and times of an icon. Lets salute a great wife, unique woman and a mother in a million.

Your sterling quality and exemplary life style made you who you were a loving, proactive and accommodating mother has shown us the benefit of hardwork through her culture of being a late sleeper and early riser.

Those who strictly adhered to your principles of life are better for it. You were very neat, elegant, intelligent and sense of memory was far above average compared with any of your age group. You were not rich but you were contempted, no wonder you have never being bedridden day. Your life revolved around your children and those who were brought to your care, I am a living witness of those who you had impacted upon and to God be the glory.

Your early intervention, and that of my dad saved me from totally been blind at an early age of Sixteen (16) years – Jesus is Lord.
Your Christian life style truly manifested on your children as their work in the Lord’s vineyard can not be easily wished away your exit marks the end and the beginning of another era in the history of Sorunkes, Obadinas and Olukotuns in general. If Jesus and his words continue to reign you will everly be my mother here and there after.
Good Night Iyasunday Good Night Omo Agidanrin, Omo Wowo. Sunre O! Sunre O!! Sunre O! Abiyamo Tooto.

She would have written this; Esther Omoboade Iya Mi Owon. Alanu mi, olutojumi tomotomo I wrote a lot of songs to be rendered on your burial but alas I went before you ….. ESEUN MAAMI -BUNMI MAKINDE 1st Grand Child
Maami, All the love you have shown me, I appreciate you in every way. Your memory resonates. They are fresh in my mind. You are such a wonderful mum ….. You lived an exemplary life worthy of emulation even for generations to come ….. We love you but God loves you more.

Keep resting in the Lord. I LOVE YOU –Mrs. Wuraola Fawole

Words are not enough to explain your worth to us as a family and to all that ever had encounter with you. You were wonderfully made by the Jehovah God, the perfected of all that He created.

Your Children, Grand Children and Great Grand Children can not ask for a better Mother, Grand-Mother and Great Grand Mother for you were simply the best. You were one in a million and were always there for everyone that needed your help. Iya Lai, you have left for us all an indelible foot print and shining example for us all to follow. We Thank Go For Your Life. SURE O! SUN RE O!! SUN RE o!!! Iya Lai My Sweet Mother -Mr. & Mrs Lai Olukotun Family

My mother, My Friend, My Mentor and Confidant, An epitome of peace humility, Honesty, Discipline and Contentment. You were beautifully and wonderfully made by Jehovah. On the 11th of March, 2018 which was the Mother’s day, I sang Sweet mother for you, you hugged me and said Abiola.

Omo Olaji, Iwo Oko Toju Mi E Sike Mi, Omo A Toju Eyin Na O.
Not quiet 30minutes I left you, I noticed you closed your eyes thinking you were sleeping but alas you didn’t wake up from the sleep you finally gave up the Ghost at 6am on 14th March, 2018.

My wonderful Mother of Inestimable Value is gone. My Mother, a woman of high integrity A prayer warrior. She was . beautiful inside and outside. A virtuous woman to the chore. My mother, you excelled them all. I thank God for He allowed me to come to this world through you. Continue to rest with your maker. MISSING YOU MAAMI – Mrs Funmilayo Sodiya
When I remember the time we spent together as your son-in-law, you paddy your doctor you believed I was.

Mama: Mo si Ie dimu dada. Mama you have been so good to me, because we related like friends.
Thanks For Your Love To Me And My Entire Family Adieu Mama.