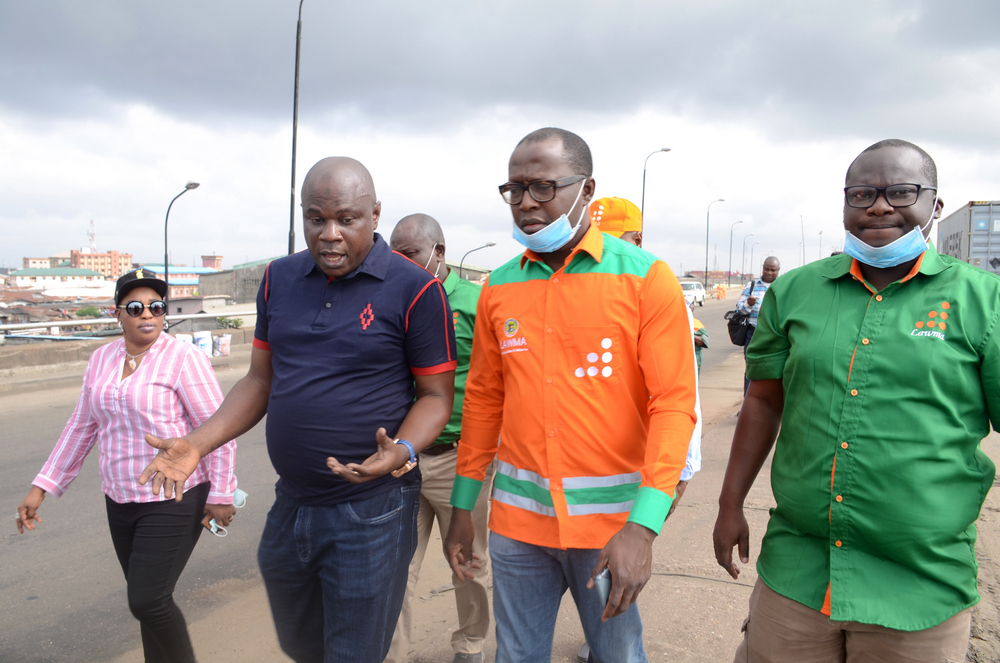 The Managing Director/ CEO of Lagos Waste Management Authority, LAWMA, Dr. Olumuyiwa Gbadegesin, has declared that the organisation would stop at nothing to rid the state of filth, across its three operational districts.

He made the declaration in Apapa, during his inspection of LAWMA operations in the area, stressing that the agency would pay special attention to black spots including Mile 2, LASU Gate, Okokomaiko and Badagry among others.

“We’re here to monitor the on-going clean-up exercise, which is in furtherance of the executive order on Environmental Sanitation by His Excellency, Mr. Babajide Sanwo-Olu”, he said.

The LAWMA boss noted that the authority had stepped up its operation despite the accessibility challenge by evacuation trucks, adding that sweepers had been deployed in their numbers for a thorough cleanup of the environs. The exercise according to him also extends to LASU gate, Okoko, Badagry up to Seme.

‘As you are aware, Apapa has accessibility challenge but we are determined to confront the challenge and get the job done and that is why we are here. Our sweepers are here in their numbers sweeping the highway and clearing the silt. This exercise extends to other areas like Okoko, LASU Gate, Badagry up to Seme‘, Gbadegesin said.

He implored residents of Lagos to support the government in maintaining a cleaner and sanitary environment and to shun all forms of indiscriminate waste disposal, which was capable of exposing the populace to environmental health dangers.

“We are calling out to people statewide that we should stop indiscriminate dumping of waste. During this Sallah celebration, we distributed free trash bags and we are pleading with residents to use those trash bags to dispose of their wastes and to also make sure that you have a covered waste bin at home. We don’t want people dumping wastes by the roadside because this puts us at risk of epidemics”, he added.

Speaking on enforcement against indiscriminate dumping of refuse, Gbadegesin said that there would be zero-tolerance against such acts and defaulters would be apprehended and prosecuted to serve as a deterrent to others.

In the same vein, the LAWMA CEO revealed that the Authority had started bulk waste evacuation from major locations, motorised collection of waste from kerbside; placement and regular collection of waste from appropriate receptacles and waste prevention activities which involves closure of illegal waste locations otherwise known as black spots, through waste policing from Orile all the way down to Badagry expressway, to phase out the environmental challenges being experienced in the areas in recent times.

Dr. Gbadegesin added that PSP operations were being repositioned to meet the household waste management needs of residents, while Community Development Associations (CDAs) and other stakeholders are currently engaged in LAWMA’s massive public enlightenment campaign, to ensure that cleanliness is restored to all parts of the state.