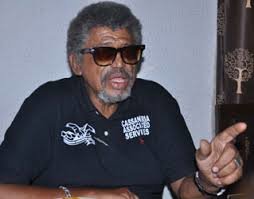 On July 30th, 2017, Evergreen Music Ltd., Nigeria’s most consistent music record label, that is committed to preservation, documentation and propagation of music of yesteryear honoured Tony Benson, son of the godfather of Highlife music in Nigeria ( Bobby Benson) as it also gave a posthumous award to Bobby Benson in recognition of his remarkable contribution to the growth of Highlife music in Nigeria. The event was organised in conjunction with Ojez music entertainment. Ajike was there and had a heart-to-heart interview with Tony Benson.

Who is Tony Benson?

Tony Benson is a simple person and they say there is beauty in simplicity. I try to make my existence as simple as possible, although in a way I am complicated, but believe I am simple.

What was your growing up like with a father as Bobby Benson?

As I always tell people, Bobby Benson was a disciplinarian to the core and being the first born, I got the brunt of it more than any of my siblings. Over the years, I have seen the benefits of the discipline in general in my life.

How long have you been playing music?

My father started me on the trap drum, they call jazz. At age 4, I first climbed the stage at Ambassador Hotel in Yaba at Sabo from there it metamorphosed into other drum kits, also the vibraphone, percussions, the keyboards. It was when I was playing a piano that my dad decided to buy me my first electronic organ. My interest in music also became intense when one of my dad’s friends, Mr Yemi Vera Cruise, played me a record of Jimi Smith that wowed me.

There is a small keyboard you put on your neck during performance. How long have you had it?

By habits I don’t waste things I try my best to maintain things and manage what I have and not discard them anyhow. I have a keyboard that I have used for 30 years, including the Yamaha keyboard you see me hanging around my neck. The mixer I use for my one-man show I have had it since 1976.

You have been off the music scene for a while now. How long?

I have had about 6 – 8 years spell of absence from the music scene. The recent Elders’ forum event put together by Evergreen Musical Company and Ojez last month to honour my dad could be said to be my most recent public performance.

At what age would you say you started working?

I started working from age 10. Caban Bamboo started as a club house. I always bought things from the market for the kitchen; bar at Ebute metta Leventis Store, the Chinese knew me well then. It was more of a responsibility on my part and I worked more during holidays period.

Please tell us about Cassandra, what is your relationship to her?

Cassandra is my mum. She was 91 years old on July 14th, 2017. I didn’t get to know her properly till later when I went on holidays and in total on and off it is about 6 – 7 months of my adult life I can say I knew her physically. Cassandra lost her sight the very month Caban Bamboo was demolished in 2005. I paid her a tribute in one of the songs I specially wrote and dedicated to her entitled: “Cassandra”. Maxwell my brother is hell bent on my visiting her soon.

Bobby Benson is known today as the Godfather of Highlife music in Nigeria, what can you say about this assertion?

I must correct a wrong impression here. Neither I nor my father can be referred to as highlife musician. In those days, our club catered for all nationalities, embassies’ officials and professionals from different walks of life. They all had different tastes for a wide varieties of music genres such as Highlife, samba, bolero, jazz, jive, blues, etc  I remembered whenever my mum and dad returned from overseas, they usually do the jitterbug , tap dancing on stage to entertain their audience. So, considering that background, one couldn’t have boxed oneself into a particular music genre.

It appears Bobby Benson didn’t release more than 10 songs, what can you say about this?

My dad released over 30 songs in his repertoire. I remembered listening to some of his recordings many years ago on a Coutonou radio station. In as much as our language is different from theirs, I knew it was his music when I heard it and I am sure one can get them there.

Nigerians all over the world will like to know the present state of Caban Bamboo and why, for over 12 years now, it has remained a virgin land without a new structure.

Some rascals in government felt there was disunity in the family and felt they could take advantage of the lack of cohesion among us first to demolish it and in most recent time to confiscate it until some people I learned added their weight to this animousity. Though they had a hard time. Lagos State government is asking for a certain amount to be paid for the demolition and also put up unbearable clauses that have been very difficult to meet, considering the present economic climate in our country. Among such clauses is a proof of our ability to be able to raise the demolition funds in demand for the land to be released to us. Though, the matter is still in court.

What can you say about the survival of highlife music and other musical genres that are familiar to your generation?

Unfortunately, those who appreciate this repertoire are depleting in  number, and it may be difficult to find them collectively in a cluster as they are scattered everywhere. And, of course, the country’s insecurity has drastically reduced nightlife activities as compared to those good old days, I remembered in those days you could take a drive to the beach as late as 2am and relax, but today even going to the suburb of Surulere may be dangerous even during the day.

On a final note, what is your message for young upcoming Nigerian musicians?

The young ones are trying the best they know how to because of the limited access they have to musical exposure like us even though they are doing well, but they would have moved in leaps and bounds if they had the kind of opportunity and exposure we had. I often use the example of bottle water to try to buttress my point. As we all know that bottle water became very unaffordable at some points and only a few people could afford it but immediately sachet pure water came into the market, it was affordable by all. Invariably, I will like to say access to proper musical institution and affordability of training programmes with or without education are a big determinant to help them learn skills such as singing, dancing, and playing musical instruments. Let me give you an example. When I visited Carnagie Center in New York, it was opened to everybody to learn how to play the keyboard, tap dancing with little tuition fee. As I said though with all the seeming stumbling blocks, they have figured a way out.