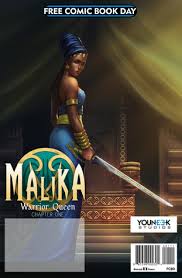 Anthill studios – who will be handling pre-production and production – has released a teaser for the series, launching a Kickstarter campaign aimed at raising $15,000 to cover the entire animation production costs.

A historical fantasy epic set in 15th century Africa, the series is written and will be directed byRoye Okupe, the CEO of YouNeek Studios, who also created the source material.

Set in fifteenth-century West Africa, Malika: Warrior Queen follows the exploits of Queen and military commander, Malika, who struggles to keep the peace in her ever-expanding empire.

Growing up as a prodigy, Malika inherited the crown from her father in the most unusual of circumstances, splitting the Kingdom of Azzaz in half. After years of civil war, Malika was able to unite all of Azzaz, expanding it into one of the largest empires in all of West Africa.

But expansion would not come without its costs. Enemies begin to rise within her council, and Azzaz grabs the attention of the most feared superpower the world has ever known: the Ming Dynasty.

As Malika fights to win the clandestine civil war within the walls of her empire, she must now turn her attention to an indomitable and treacherous foe that plans to vanquish her entire people.

Though a fictional setting, Azzaz is surrounded by actual African states and rulers: bordered to the south by the Oyo, Nri, and Benin Kingdoms; to the west by the Songhai Empire and Timbuktu; and to the east by the Kingdom of Kongo.

Youneek studios is popular for comic superheroes such as EXO, Windmaker, Fury, Oniku and Dreds.