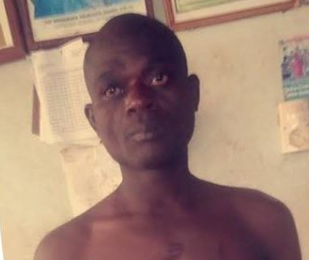 Men of the Ogun State Police Command have arrested Olanrewaju Bamidele, pictured above, for allegedly stabbing his wife, Adenike Olanrewaju, to death with a screwdriver.

A statement released by Abimbola Oyeyemi, spokesperson of the state police command today January 20th, says Bamidele was arrested after his son, Ayomide Olanrewaju, reported that his deceased mother was murdered by his father following a misunderstanding they had.

The son told the police that he watched his father hit his mother with a big stick which caused her to fall into a coma and afterwards, he used a screwdriver to stab her on the head.

On the strength of the report, the officer-in-charge Ofada Police Post, DSP Akinfolahan Oluseye led his men to the scene at Bisodun village via Ofada where the suspect who had been held down by the people of the community was handed over to the police and he was immediately taken to Owode-Egba Divisional headquarters where he is currently being interrogated.

The corpse of the victim has been deposited at Olabisi Onabanjo Teaching Hospital Mortuary, Sagamu for autopsy, while the screwdriver and the stick which the suspect used to kill the victim have also been recovered” he said

The suspect, who is known for battering his wife, was arrested after his children caught him preparing a shallow grave near their home to bury their deceased mum.

Man allegedly stabs wife to death with a screwdriver in Ogun was last modified: January 21st, 2020 by Reporter

‘The Rock’ reveals the cause of his father’s sudden death